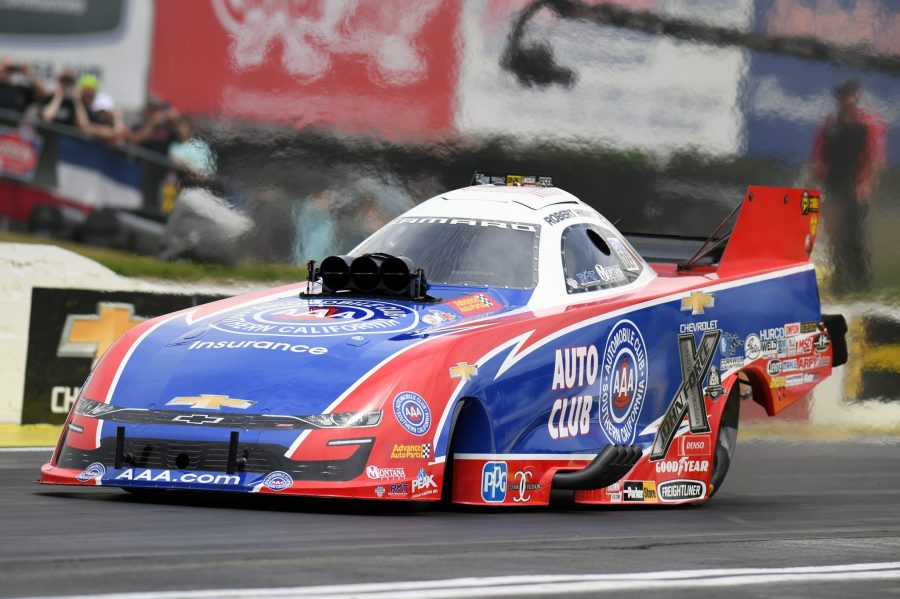 COMMERCE, Ga. (May 4, 2019) — After a rain delayed afternoon that canceled the final session, Robert Hight and Brittany Force ended the day doubling up as No. 1 qualifiers in their respective categories Saturday at the Arby’s NHRA Southern Nationals. John Force, who was celebrating his birthday, secured the No. 3 spot and Austin Prock remained No. 11.

Two-time Funny Car world champion, Robert Hight and the Automobile Club of Southern California Chevy Camaro SS Funny Car team will start race day from the No. 1 position for the fifth time this season, second time at Atlanta Dragway and 65th time in his career. Before a rain delay cut the Funny Car class short from finishing the third session, Hight was bumped to the No. 13 spot from tenth, where he started the day. When the last six cars came back to make their third qualifying pass, the Auto Club team laid down a stout 3.920-second run at 328.54 mph as the first pass down the freshly dried track. Hight’s time would hold making him the first driver since 1987 to be No. 1 in five of the first seven races.

“It’s pretty impressive to have a car like this. Going in there we knew we were going to be in the bottom half of the field if we didn’t improve but you know, Jimmy, instead of just making a safe run he put it down and ran what he knew it could run which is a 3.92,” said Hight who will face Terry Haddock in the first round of eliminations. “When you push that hard you risk smoking the tires but they didn’t. They made the run, we were low E.T. by two hundredths and this wasn’t even the session we had the best conditions, that should have been last night and we messed that up so it doesn’t get any better than this right now.”

Brittany Force, who is looking to add to the Force family wins at Atlanta Dragway, locked in the No. 1 spot Saturday off the efforts of her 3.720-second pass at 319.52 mph Friday night under the lights. It was the first time Force secured the No. 1 spot at the facility and her third No. 1 qualifier of the 2019 NHRA season. In the third and final session of the day, Force shook the tires and shut off her dragster to run a 6.611-second pass at 94.65 mph but remained in the top spot heading into Sunday. She’ll start race day matched up against Cameron Ferre.

“I’m feeling good. We’re exactly where we want to be and we picked up some points this weekend. We’re No. 1, we have the best shot, best ladder going into race day tomorrow,” said Force. “Today was an important run, though, and we didn’t get down there. I’m not sure what the weather looks like tomorrow but we really wanted that one which is why we wanted to get back up here for the second run but everybody lost that run so we’re going into race day as prepared as everyone else.”

On the hunt for his 150th NHRA tour victory on his birthday weekend, John Force and the PEAK Coolant and Motor Oil BlueDEF Chevy Camaro team ended Saturday in the No. 3 qualifying spot off the efforts of his 3.958-second pass at 322.04 mph from Friday night. In the third session, Force went up in smoke and clicked it off to run a 4.301-second pass at 209.95 mph. He’ll start race day matched up against Jack Beckman as he looks to tally win number eight at Atlanta Dragway. Two of his previous wins at Atlanta (1999 and 2000) have come from the No. 3 qualifying spot and Force has won on his birthday weekend twice, 1996 in Richmond, Va. and his 2000 win at Atlanta.

“Good weekend for John Force Racing with Robert Hight and Auto Club getting low and Brittany and Advance Auto Parts getting low. The weather hampered us but we’re all in the show, me with PEAK and Austin with Montana Brand / Rocky Mountain Twist and Chevrolet, that’s what matters, that’s what they pay us for,” said Force. “Tomorrow I’m racing a great driver and a great tuner, Jack Beckman and Guido (Dean Antonelli). Guido worked here at John Force Racing, he’s a great friend. May the best man win.”

Austin Prock and the Montana Brand / Rocky Mountain Twist dragster team had a clean pass in the third session to run a 3.913-second pass at 309.56 mph but it wasn’t enough to improve and move from the No. 11 spot going into race day. Prock will face Dom Lagana in the first-round of eliminations Sunday.

“Made some progress today. Made another decent pass, we were fifth quick in the session. I actually screwed up. I staged the car stopped, and rolled in on the tree and we had a cylinder out at about 330 feet so we probably would have run 3.84 which would have been a really respectable run in that session, I think would have been third quick,” said Prock. “No excuses, but we can be better than what we performed today, on the tree with me and then we’ll get the fuel system dialed in and everything will be good. The car is starting to repeat, clutch pressure looks nice, engine looks nice so we should be able to make four repeatable runs tomorrow and be able to turn on some win lights.”