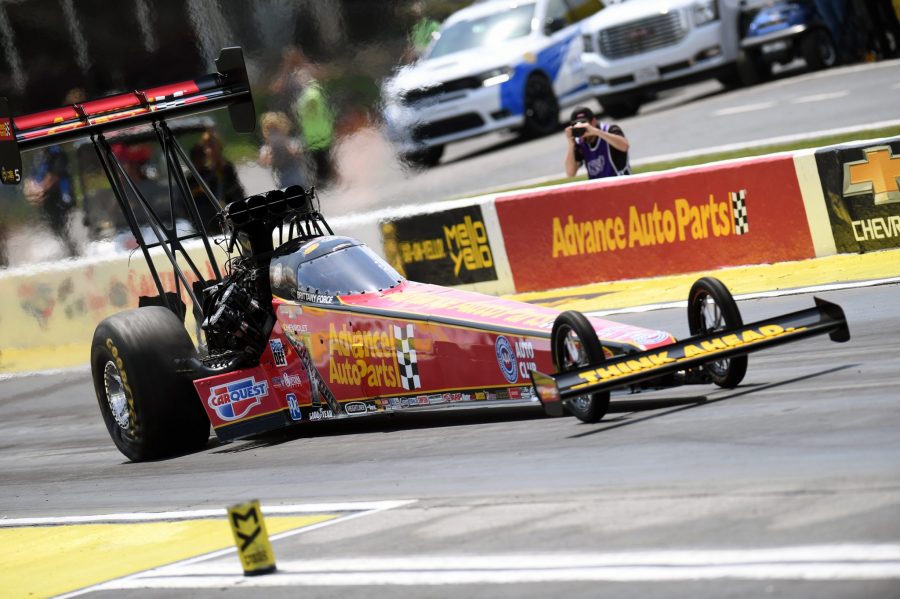 COMMERCE, Ga. (May 5, 2019) — Brittany Force and the Advance Auto Parts team had their second runner-up finish of the season Sunday at the Arby’s NHRA Southern Nationals at Atlanta Dragway. Force led teammates Robert Hight, John Force and Austin Prock who had semifinal, second round and first round exits, respectively.

After securing the No. 1 qualifying position for the first time at Atlanta Dragway, Brittany Force strung together four consecutive sub-four-second runs. In the first round against Cameron Ferre, Force ran 3.887-seconds at 316.08 mph even after dropping a cylinder early. Ferre was up in smoke at the hit and was forced to shut off.

In the quarterfinals, Force faced three-time world champion Antron Brown and put up her best elapsed time of the day at 3.843-seconds and 314.83 mph that sent Brown with his 3.888 pass at 299.33 to the trailer. Matched up with rookie Jordan Vandergriff in the semifinals, Force had the starting line advantage and never trailed as Vandergriff smoked the tires and shutoff early. Force crossed the line at 3.893-seconds at 309.20 mph to Vandergriff’s 4.630 at 165.05.

The semifinal win would send Force to her third final round of the season matched up with reigning world champion and rival Steve Torrence. It was a clean side-by-side race until Force and her Advance Auto Parts machine reached the top end of the race track and started to haze the tires to cross the finish line at 3.989 seconds and 274.00 mph. Torrence would pick up his second consecutive win with a 3.863-second pass at 320.20 mph.

“Good weekend in Atlanta for this Advance Auto Parts team. We were No. 1 qualifier, picked up a handful of points. I believe we moved up from four to two which is an awesome place to be,” said Force. “We went to the final round couldn’t get the job done and the thing spun down there about 600 feet and Torrence got around us. We were ahead of him but that’s the game of racing, that’s how racing goes and congrats to that team. This Advance Auto Parts team is going to pack up and we get a week off, then we go to Richmond and plan to dominate again.”

No. 1 qualifier, Robert Hight took the win light in round one of eliminations when he was paired against Terry Haddock. Hight powered his Automobile Club Chevy Camaro SS to a 3.942-second pass at 310.91 mph to beat Haddock’s 5.681 at 122.10. In the second round, Hight faced Paul Lee in a pedalfest to the finish line after both Funny Cars smoked the tires. He would advance to the semis off his 4.376-second pass at 279.90 mph to Lee’s 4.967 at 169.61. Going head-to-head with Tim Wilkerson in the semi-finals, Hight had the starting line advantage but after dropping a cylinder didn’t have enough to make it to the line first. He ran a 4.182-second pass at 258.02 mph falling short of making it to his fifth final round of the season with Wilkerson’s 4.084 at 313.66.

“We dropped a cylinder in the semis and, you know, summer’s here. It usually doesn’t happen to our car, we’re usually pretty good on dropping cylinders but today was our day to drop them,” explained Hight. “We’re going to bounce back from this. We’re leaving here with a bigger points lead than what we came in with. That’s all positive. It gives us a little room to test and try to get even better which I think there’s room for improvement.”

John Force and the PEAK Coolant and Motor Oil BlueDEF Chevy Camaro team had the starting line advantage to take the win against Jack Beckman in the first round of eliminations when he ran a 3.994-second pass at 327.74 mph to Beckman’s 4.040 at 312.78. In the quarterfinals, Force started to lose traction and had to shut off resulting in a 4.312-second pass at 220.80 mph to rival Ron Capp’s 4.022 at 317.57. This would mark the first time this season that Force hasn’t lost to teammate Robert Hight on race day.

“The Advance Auto Parts dragster is coming around, it’s up there in the points, made it to the final round. Robert is in the lead with that Auto Club car, it’ll get a couple more wins. My car is up there in the top of the points, running good. Austin Prock’s car is coming around with Montana Brand / Rocky Mountain Twist, gotta get it running right,” Force commented. “What I’m saying is, we all know the drill. We wanted to win here, everybody did but, I think, as a team, we’re doing good.”

“Got beat on a close race today. We qualified on the bottom half of the field and that puts us in a tough position on race day. We ran decent and lost but we’ll regroup and go to the next one,” said Prock. “It’s a good running race car. We have potential, we just need a few more laps and we’ll get there.”

The John Force Racing team will head to Richmond, Va. May 17-19 for the Virginia NHRA Nationals at Virginia Motorsports Park, the eighth event on the NHRA Mello Yello Drag Racing Series season schedule.