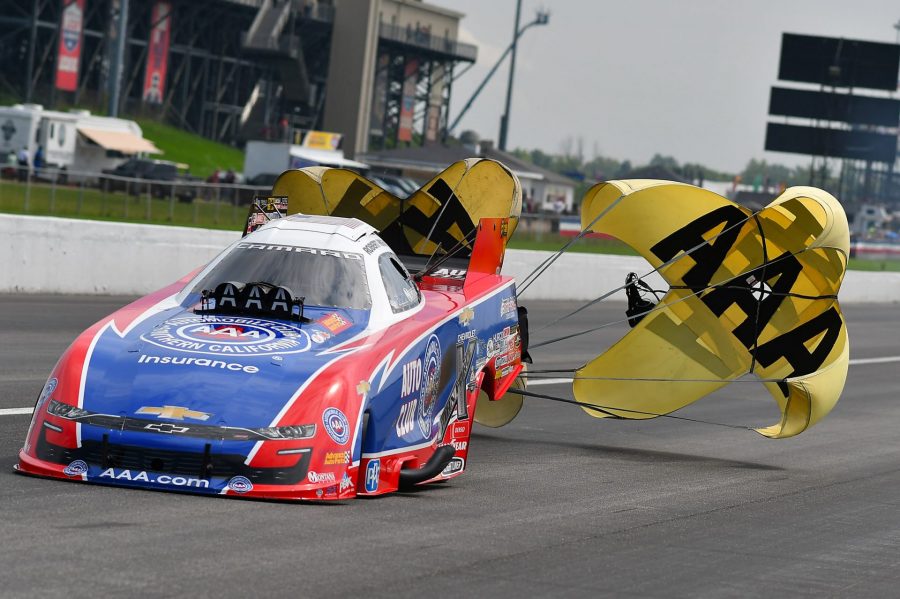 READING, Pa. (Sept. 11, 2019) — With the regular season championship under their belt, Robert Hight and the Automobile Club of Southern California Chevrolet Camaro SS team are making their way to the first of six races in NHRA’s Countdown to the Championship, the Mopar Express Lane NHRA Nationals presented by Pennzoil, with eyes set on winning a third Funny Car championship title.

Hight, who will begin his battle to the championship from the No. 1 spot after only needing to qualify at the recent U.S. Nationals, has dominated the Funny Car class through 18 consecutive events since taking home the Wally at the season opening Winternationals. He went on to follow up the victory with four additional wins, two runner-up finishes, three semifinal appearances and eight No. 1 qualifiers that include two NHRA history-making green hat starts. At the famed Gatornationals, where he also took home the Wally, Hight became the first driver to collect three consecutive No. 1 qualifiers in the first three races of the season since Kenny Bernstein in 1987. Then, at the Southern Nationals outside of Atlanta, Ga., he became the first driver since 1987 to be No. 1 in five of the first seven events.

“We didn’t leave Indy with a win but we left with the No. 1 spot heading into the Countdown and that feels pretty good. It’s a first for us and I’m proud of that. Jimmy Prock, Chris Cunningham and the Auto Club team have been putting in the hard work all season to have the best race car out there and I think we’ve shown that all season long,” said Hight. “I went to Indy to get in some testing earlier this week before going to Reading and I’m feeling confident. We figured some things out and we’re going to have a strong car this weekend.”

Hight heads to the 19th event on the NHRA Mello Yello Drag Racing Series Season schedule at Maple Grove Raceway with success on his side. Hight has won the event once in 2011, finished runner-up in 2006, and has qualified No. 1 twice in 2015 and 2017.

“Reading is this weekend, it’s the first of six races to the championship and I’m looking forward to getting there. The last time I won here was in 2011, so you know, I’d definitely like to get a win here again, extend my points lead before going to the next one,” said Hight. “It’s really go-time now and to get a couple more wins under our belt, that would really set us up for winning the Funny Car title and give me the best season of my career.”