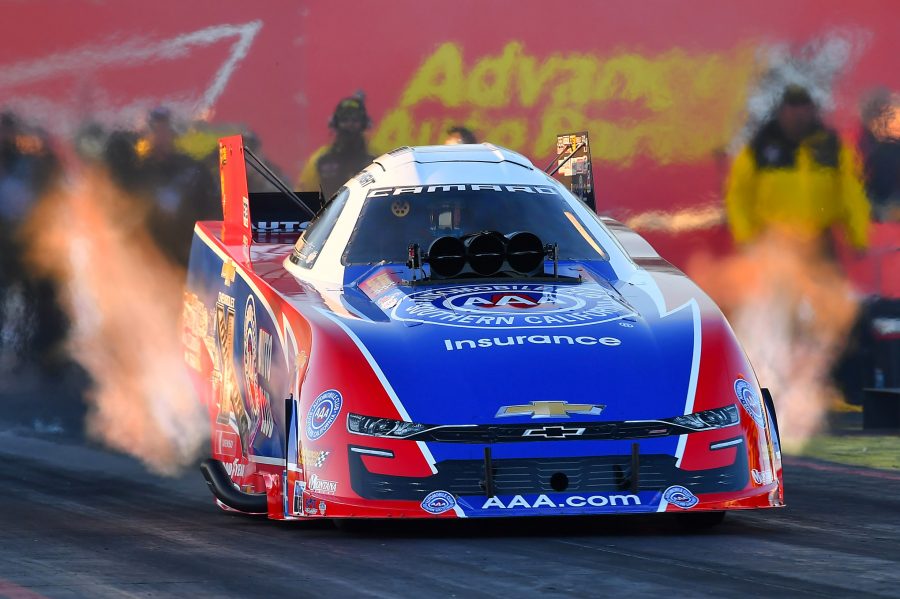 For the second consecutive race weekend, the second time at Wild Horse Pass Motorsports Park and the 62nd time in his career, Robert Hight is sitting at the top of the Funny Car class with his Auto Club team.

Following a short first day of qualifying due to inclement weather, Hight and his crew, headed by Jimmy Prock and Chris Cunningham, came out swinging for the fences Saturday afternoon. They took the top spot in the third qualifying session with an impressive 3.882-second pass at 327.27 mph that gave them the opportunity to be in the last pair of the night. After 12 Funny Cars took their last go at improving their ETs on Saturday evening, Hight had slipped to the No. 2 spot. As the final pair, the two-time championship team ran a stellar 3.867-second pass at 329.91 mph to retake the No. 1 spot.

“We were No. 1 going into this session and it got taken away. (Matt) Hagan got it so we were going back up there to get it back. There’s no reason to even make that run unless you’re trying to improve and go fast. These are tricky conditions and I knew if it could get past the tree it was going be fast because that’s the tricky spot here,” Hight said. “When its conditions like this, cold, you’ve got to hit it hard at the start and knock a bunch of timing out. In the middle of the track this thing was really pulling because it was going 286 mph at half-track and it’s been awhile since a Funny Car has done that. It was a fun run. I had my hands full at the other end. I was a little late on the chutes because I had to keep it off the wall and it got hopping down there so it was exciting from the step of the gas clear to the finish line.”

Hight, coming off a win at the Winternationals, will start race day against Jeff Diehl whom he has an 11-1 record against, all of which have been first round meetings.

Austin Prock and the Montana Brand / Rocky Mountain Twist Top Fuel dragster landed in the No. 6 position following Saturday’s qualifying. The Rookie of the Year candidate ran a solid 3.738-second pass at 328.46 mph in the third session that put him fourth in the qualifying order heading into Q4. During the final session he shifted into the No. 6 spot after going up in smoke at the start and having to shut off for a 6.915-second time-slip. Prock will go face-to-face with Clay Millican for the first round of eliminations.

“Today Q3 went great. We ran 3.73. That was the number we were looking for. We’re trying to get more data under our belt, more runs we can look at A to B. We did just that and ended up qualifying at No. 6 so I think that’s a good start for us. It’s five spots better than last weekend,” Prock said. “In Q4 we had a malfunction and the car shook early and the throttle flew wide open. It was a little bit of a rowdy ride but I kept it in my lane. Thankful my crew chiefs were able to shut me off and keep everyone safe so a little bit of a wild night but we’ll be ready for tomorrow.”

John Force opened Saturday qualifying with a 3.950-second pass at 321.27 mph in his PEAK Coolant and Motor Oil Chevy Camaro that would be his quickest of the three sessions. In the final qualifying session, Force had trouble early with tire shake and spin at the start and crossed the 1,000-foot line at 7.103 seconds. The No. 8 position puts Force against familiar foe Ron Capps. Force is 59-40 against Capps who he most recently beat in the second round of the season opening Winternationals.

“We did good today. Robert was low with Auto Club Chevrolet. Montana Brand / Rocky Mountain Twist with Austin is in. Advance Auto Parts and Brittany are in and PEAK is in,” Force said. “I finished No. 8. That’s not bad but I want to do better than that. We’re just not where we want to be but we’ll get there and we’re learning every day. We’re ready to win and hoping to go in and do better tomorrow.”

It was a difficult two days of qualifying for Brittany Force and the Advance Auto Parts team. Force will begin race day from the No. 13 spot after a 4.838-second pass at 188.31 mph in the fourth qualifying session. Force will race against rookie Jordan Vandergriff in the first round. Vandergriff will be the 45th different opponent the 2017 world champion has faced in her Top Fuel career.

“We’re going into race day tomorrow from the No. 13 spot. It’s a tough position. We race Vandergriff first round tomorrow. New team, new crew chief, new car. We’re still trying to figure our routine out,” Force said. “We’re still looking to turn this thing around on the race track and it may take a few races but no one ever said you can’t win from the No. 13 spot. That’s how we’re going in tomorrow. We’re looking for a long day to get this Advance Auto Parts car going some rounds and get in the winners circle.”