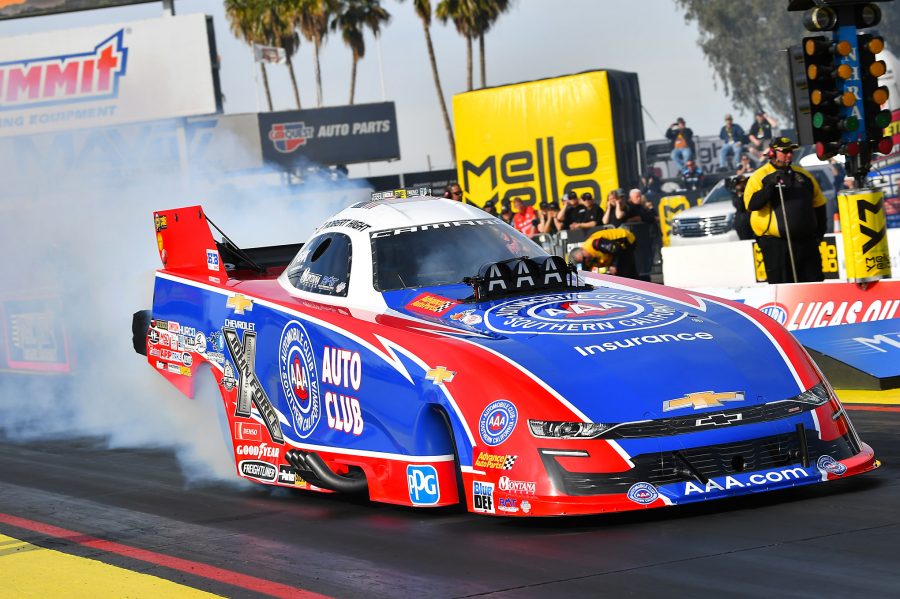 CHANDLER, Ariz. (Feb. 24, 2019) — Robert Hight and the Auto Club of Southern California team maintain the points lead with a semifinal finish Sunday at the Magic Dry Organic Absorbent NHRA Arizona Nationals at Wild Horse Pass Motorsports Park outside of Phoenix. Hight defeated John Force in the second round and in Top Fuel, Austin Prock had a second-round finish and Brittany Force had an early Sunday with a first round exit.

In round one, Hight ran a 3.863-second pass at 329.67 mph uncontested after his would-be opponent, Jeff Diehl, had to push back from the starting line. The win set Hight up to race against team owner John Force in the second round.

The Auto Club Camaro crossed the finish line first with a 3.879-second pass at 327.82 mph to defeat Force’s 3.988 at 325.92. Hight and Force also met each other in the semifinals of the NHRA Winternationals where Hight went on to win the event. Hight has now beaten Force four straight times, equaling the longest winning streak by either driver during their rivalry.

“Not a bad day for the Auto Club Chevy Camaro. We ran well all weekend and went some rounds today. The car slowed down, that was our slowest run,” Hight said. “They out drove us and I was late on the tree. We’re leaving here with the points lead and Jimmy Prock and Chris Cunningham have this thing dialed in. They are happy with how we’re running and we’re feeling good. We’ll be testing tomorrow, trying some new things out. It will only get better. I’m excited for the rest of the season.”

John Force lined up against Ron Capps for the 100th time in his career and picked up his 60th round victory over the veteran racer. Force and the PEAK Coolant and Motor Oil Chevy Camaro ran 3.933 seconds at 317.19 mph bettering Capps’ 3.968 at 319.98. For the second consecutive race weekend, Force would face his company’s president, Robert Hight. Like the Winternationals, Hight, who ran 3.879 seconds at 327.82 mph, picked up the round win over Force who ran 3.988 at 325.92.

“You’re always looking to see if your car is qualifying and maybe win some rounds, so life’s good. But if you’re going to run for the Championship, you have to start now. Robert has a head start and I have a lot of work to do with this car, my team and me as a driver. Brittany has the same work as me and we’ll see where it goes,” Force said. “I want to thank all of the sponsors. The new one with the young kid (Austin) Prock, Montana Brand / Rocky Mountain Twist, and of course PEAK, Advance Auto Parts, Auto Club and Chevy. We’ll be testing tomorrow and we’ll see where it goes from there.”

Austin Prock made his second career race day start with a win over veteran racer Clay Millican. Prock powered his Montana Brand / Rocky Mountain Twist dragster to a 3.748-second pass at 328.22 mph to out run Millican’s 3.862 at 306.74. Millican lost traction at half-track allowing Prock to drive past him.

In a round two pedal fest, Prock matched-up against three-time world champion Antron Brown. He made a 4.389-second pass at 179.40 mph but was defeated by Brown’s 4.198 at 261.12. This will put the Top Fuel rookie eighth in the points standings.

“We had another good weekend, second weekend out. We can’t really complain. We had a good drag race going with Antron Brown. We were out in front of him the whole race and it ended up spinning down there and the safety box shut us off. The boost center spiked up and it ended up killing the engine so it was one that slipped away from us and it hurts but I think everyone knows we’re here and we’re going to go get them in Gainesville.”

Brittany Force ran the best pass of her weekend in the first round of eliminations. Despite having a cylinder out on her Advance Auto Parts dragster, she crossed the line at 3.768-seconds and 314.02 mph but it wasn’t enough for rookie Jordan Vandergriff’s 3.692-second pass at 333.41 mph. With a new car, new crew chiefs and an entire new team, Force and the Advance Auto Parts dragster will be testing Monday after the Arizona Nationals in preparation for the rest of the NHRA season.

“Second race of the season and we got beat in the first round again. You know, I’ve said this before, but it’s tricky when you bring in a whole new team and new crew chief, and making all the swaps that we’ve been making over to the JFR parts. It’s a lot to handle,” Force said. “We knew it was going to take some races and its going to take a little bit of time but our plan is to come out tomorrow and spend all day testing here in Phoenix. Make four good runs. We’re going to work this car down the track and see if we can figure this thing out because we either can’t get it past the tree because it goes in to shake or if we do, its dropping holes. We’re really going to figure this out before we go into Gainesville and we’ll start fresh there.”