ROBERT HIGHT AND AUTO CLUB POWER TO NO. 2 SPOT FRIDAY AT THE NHRA CAROLINA NATIONALS 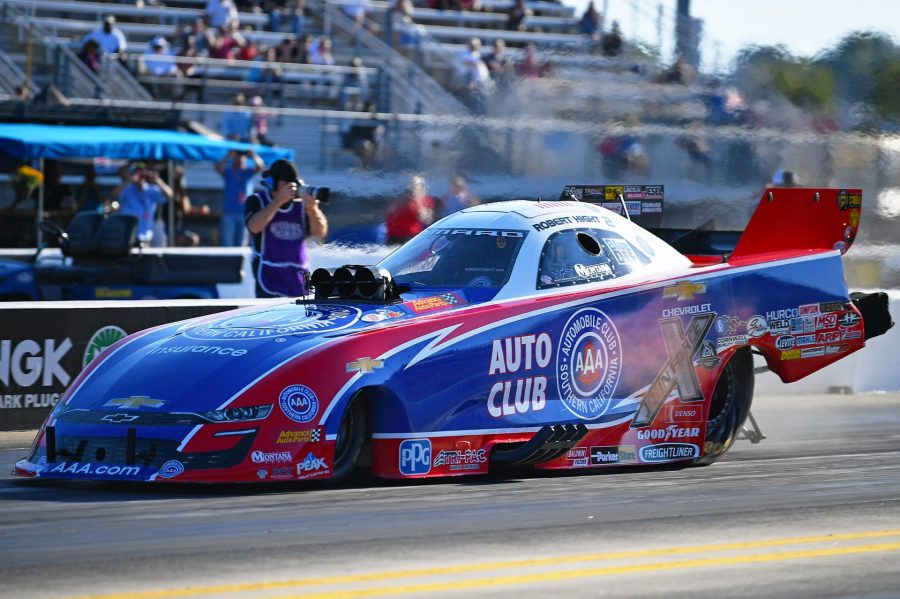 CONCORD, N.C. (Oct. 11, 2019) — Two-time Funny Car world champion Robert Hight and the Automobile Club of Southern California Chevrolet Camaro SS team handled their way to the provisional No. 2 qualifying spot Friday night at the NTK NHRA Carolina Nationals at zMAX Dragway. Teammate and mentor, John Force is in the No. 4 position with the PEAK Coolant and Motor Oil / BlueDEF team, and in Top Fuel, Brittany Force and Advance Auto Parts are ninth and Austin Prock with his Montana Brand / Rocky Mountain Twist dragster are 14th.

On the hunt for his third Funny Car championship title, points leader and regular season champion Robert Hight opened the first day of qualifying with a clean 3.945-second pass at 327.51 mph in his Auto Club Chevy to be third quickest of the group and pick up one bonus point. In the night session, with headers ablaze, Hight continued the momentum powering his 11,000-horsepower machine to a solid 3.878-second pass at 334.07 mph to end the day in the No. 2 spot.

“We ran good today. Had a .94 in Q1 and I knew coming into the night session we’d put up a competitive number and we did, ran a .87 and this Auto Club Chevy is now second. I’m hoping we can get in two solid passes tomorrow and gather some good information for race day,” said Hight. “You know, every pass really counts from here on out. We’re in the Countdown and you have to put on your best effort out there. I’m proud of my guys for all their hard work and we’ll see what we can do tomorrow.”

Sixteen-time Funny Car world champion, John Force and the PEAK Coolant and Motor Oil / BlueDEF Chevy Camaro team closed the first qualifying session at zMAX Dragway with a stellar 3.904-second pass at 327.19 mph to go quickest of the session and earn three bonus points. Force and the Brian Corradi and Danny Hood tuned PEAK Chevy came out in the night session to lay down an impressive 3.890-second pass at 331.45 mph but would end day one of qualifying in the No. 4 position after a competitive Funny Car round.

“This PEAK / BlueDEF Chevrolet is a fast hot rod. We made a good pass in the first qualifying round and were No. 1 but there were some fast cars out there in that last one. We have two runs tomorrow though, so we’ll see how this thing goes,” said Force. “Robert and I both got some bonus points today so that’s good. Any points to keep us up in the Countdown are good, so I hope we can keep it up tomorrow too.”

In her first qualifying pass, Brittany Force powered her Advance Auto Parts dragster to a 3.829-second pass at 271.46 mph to occupy the No. 4 spot. The 2017 Top Fuel world champion, who is competing for her second win of the season this weekend, had trouble in the second session when her Advance machine suffered a minor explosion down track to cross the finish line at 4.571-seconds and 142.94 mph. She’ll start day two of qualifying from ninth.

“Little bit of a rough start to our weekend out here in Charlotte for the Advance Auto Parts team. Good thing is, we’re in the show, we’re currently No. 9 and we ran a 3.82 earlier which was a pretty good run but this Advance Auto Parts team with David Grubnic and Mac Savage, we want more,” said Force. “If we want to win this championship, we definitely have to step it up. We have to make some better runs tomorrow and pick up some bonus points if we want to win this thing.”

“Tough start to our weekend here in Charlotte. We were running pretty good on the first run; it was dead on of the run we were wanting to make but it just hit a banana peel out there, whiffed the tires off,” said Prock. “Second run, I felt like I was back in my wing sprint car. When it left, it was left rear down, front end up and straight towards the wall. It was headed towards the wall in a hurry, I had to put a lot of wheel into it. The right rear was outside of the groove and we were lined up so far outside that the left rear was just driving the car and shoved it over towards the wall. I had to make a hard correction and it blew the tires off. Just a mixture of probably some poor driving and being forced to line up outside of the groove like that, the right rear is in the marbles and the left rear is in the good stuff. Just a tough day. This place is tricky, always has been but we have two more tries at it tomorrow and we’ll get this Montana Brand / Rocky Mountain Twist dragster in the top half of the field.”