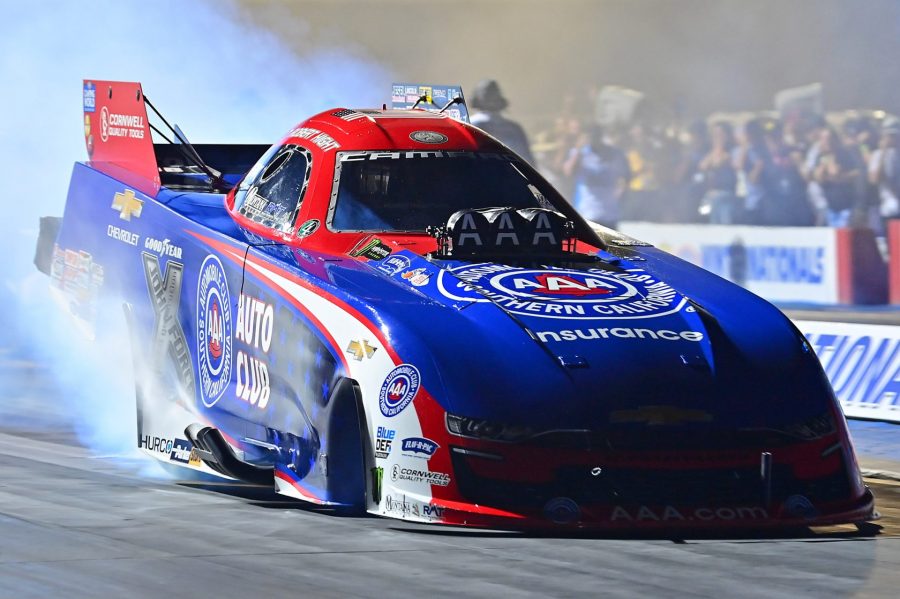 POMONA, Calif. (July 30, 2021) – Currently in the No. 2 qualifying spot Robert Hight and Automobile Club of Southern California Chevrolet Camaro picked up right where they left off Friday night at the Lucas Oil NHRA Winternationals at Auto Club Raceway in Pomona. Brittany Force and the Flav-R-Pac team are sitting No. 6 while John Force has the PEAK / BlueDEF PLATINUM Chevy in No. 10.

Coming of a consistent weekend that resulted in the 53rd victory of his career, Hight and the Auto Club Camaro rolled into the postponed Winternationals and laid down a 3.962-second pass at 327.11 mph. The run put the three-time championship team in the No. 2 spot heading with two sessions left on Saturday.

“It was a good run. The track is tricky, but Jimmy Prock and Chris Cunningham have this Auto Club Chevy running just how they want,” Hight said. “Now tomorrow, earlier in the day, warmer conditions, we’ll hopefully learn some things for and early Sunday race day. It’s not going to be an easy weekend. It’s hot and the track has been touched since February 2020. I have confidence in these Auto Club boys though.”

The Flav-R-Pac dragster of Brittany Force had to shut off early due to tire shake in the first qualifying pass. With their 5.429-second pass at 120.68 mph they’ll look to improve from the No. 6 position.

“Glad to be in Pomona to finish off this Western Swing and looking forward to Saturday qualifying after an uneventful first session,” Force said. “The track was difficult and cars ahead of us weren’t making it down there. We decided to pull it back, play it safe and it still wasn’t enough. Our car shook at half-track and put us currently in the No. 6 position.”

John Force had to pedal the PEAK / BlueDEF Chevy to stay during their first qualifying try at Auto Club Raceway. Force was able stay with it but would run 4.552-seconds at 283.67 mph to end up in the No. 10 spot heading into Saturday’s qualifying.

“We’ll be good. Tricky track. Happy to be home. Not going to be an easy weekend. Pomona in the summer and no one has raced here for a while. Glad that we’re getting this race in,” Force said. “Only the second time we’ve raced here in the summer, I won the last one. Maybe that will work in our favor. Danny Hood and Tim Fabrisi, they’ll get this PEAK Chevy running right. We’ll keep at it; I’ll keep at it. We’ll see what happens.”

Qualifying at the Lucas Oil NHRA Winternationals will continue Saturday with sessions at 4:30 and 7:30 p.m. Eliminations are slated to begin at a new time, 10 a.m., on Sunday, August 1. To catch all the action on television, tune into FOX Sports 1 on Saturday at 2 p.m. ET and Sunday at 10 a.m. ET for qualifying and FOX Broadcast Network on Sunday at 4 p.m. ET for Eliminations.