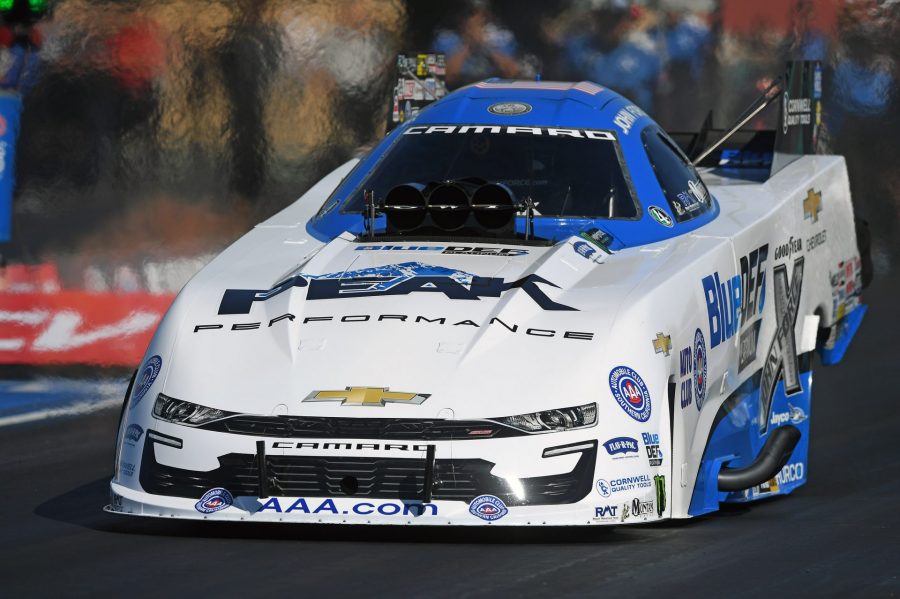 POMONA, Calif. (July 28, 2021) – John Force and the PEAK / BlueDEF PLATINUM Chevrolet Camaro SS team aren’t letting their recent points bump to No. 4 get them down. With the high level of competition, they are only 52 points out of the Funny Car lead, nothing a win at the Lucas Oil NHRA Winternationals at Auto Club Raceway at Pomona July 30-August 1 couldn’t fix.

Force and his Daniel Hood and Tim Fabrisi led PEAK / BlueDEF team’s steady climb began with a quarterfinal finish at the season opening Gatornationals. At the first four-wide event of 2021 at The Strip at Las Vegas Motor Speedway, Force would qualify No. 2 and at the NHRA Southern Nationals at Atlanta Dragway, Force and his PEAK / BlueDEF team would make their 257th final round appearance. Force earned his 161st No. 1 qualifying position before continuing his dominance into race day at the NHRA Four Wide-Nationals at zMAX Dragway and coming out with his 152nd national event victory. Force then tallied his second win of the season, 153rd of his career at the NHRA New England Nationals. Followed by two quarterfinal finishes in Norwalk and Denver, Force and the PEAK team stumbled to a first round exit at the Sonoma Nationals, fortunately some of his closest competitors had a stumble too.

“This PEAK team is still very much in this fight. There’s only a handful of points separating the top five, I’m still in that top five,” Force said. “We’ve had a good season. There’s always ups and downs, but these young guys with Daniel Hood and Tim Fabrisi, they’re working hard and we’ll be right back at it.”

Force has a total of 16 wins at Auto Club Raceway, a record. He’s won the Winternationals seven times, most recently in 2015 but in 2020 he raced to a runner-up finish. Force is the only winning driver from the 50th Anniversary NHRA Nationals, the only other event contested at Pomona during the summer, who still is active. He is also one of only two pro drivers to have won three different races at Auto Club Raceway. Force has secured 16 No. 1 qualifiers at the facility, a whopping 10 at the Winternationals alone.

“This race is home. We’re just down the way in Yorba Linda. We used to be completely based out in Southern California now there’s the museum, corporate offices and where we run John Force RaceStation as well as our rentals,” Force said. “There’s a lot of history in Southern California for me. Racing in Pomona, it’s a big event. Stands will be packed, even though it’s going to be warm. It’ll be a good summer show for them. I’m looking forward to getting in my PEAK Chevy at home.”