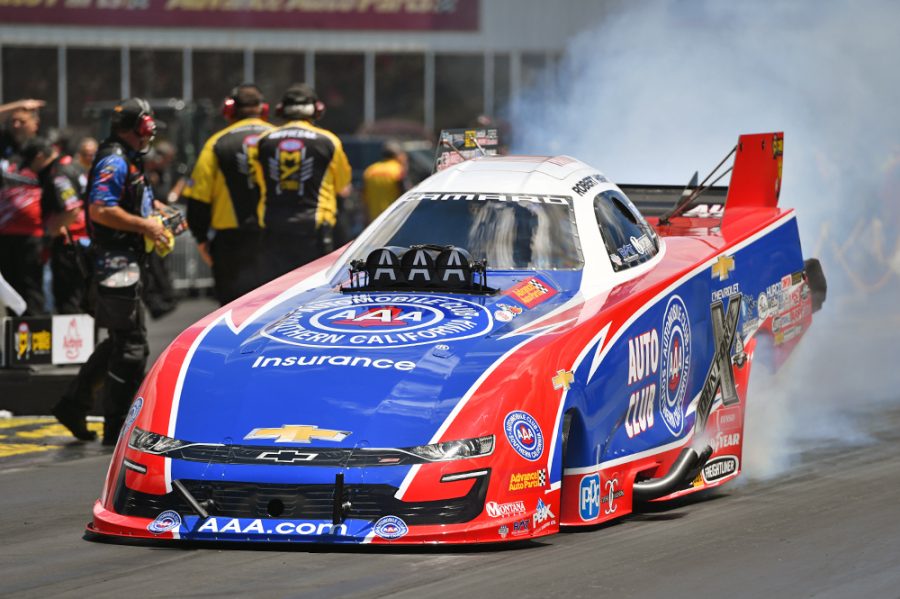 With a No. 1 qualifier and victory at the Winternationals to kick-off the season, it’s no question success has been at the forefront for the two-time Funny Car world champion. Since then, Hight and the Auto Club team have continued the upward momentum adding two wins, four No. 1 qualifiers and one runner-up finish.

On his road of success Hight has tallied two NHRA history making moments, one at the 50th Anniversary Gatornationals when he became the first driver since 1987 to collect three consecutive No. 1 qualifiers, and again at the Southern Nationals when he secured the No. 1 spot making him the first driver since 1987 to be No. 1 in five of the first seven events. He also doubled-up with teammate Brittany Force at the Spring Nationals in Houston tallying the third John Force Racing double-up, all three have been Hight and Force.

At the recent event at Atlanta Dragway, Hight saw himself sitting at the bottom of the qualifying ladder heading into the final session on Saturday. He would lay down a 3.920-second pass at 328.54 mph to land the No. 1 qualifier position for the fifth time in 2019. Hight powered his Jimmy Prock and Chris Cunningham tuned Chevy Camaro to a semi-final finish and strengthened his points lead.

“We didn’t get the win in Atlanta but we’ll bounce back from it. We left with an even bigger points lead than what we came in with, and that’s all positive going into the next race,” said Hight. “Jimmy Prock and Chris Cunningham, the entire Auto Club team, they’ve given me the most consistent car out there so I know we can get back into the winner’s circle. We’ve had a week off and I’m ready to get back into the seat and go some rounds.”

Although Hight has yet to win at Virginia Motorsports Park, which was added to the NHRA circuit after a nine-year hiatus, he’s held the No. 2 qualifier spot three times in 2006, 2007 and most recently last season where he had a rare first-round loss.

“Last year was our first time back in Richmond since 2009, so we kind of got our test run in last year. The conditions are different there and we had to figure things out. We didn’t do as well as we hoped, so this year, we’re looking for the win,” said Hight. “This team has put in some major work this season so I’m confident we can get after it this time around.”