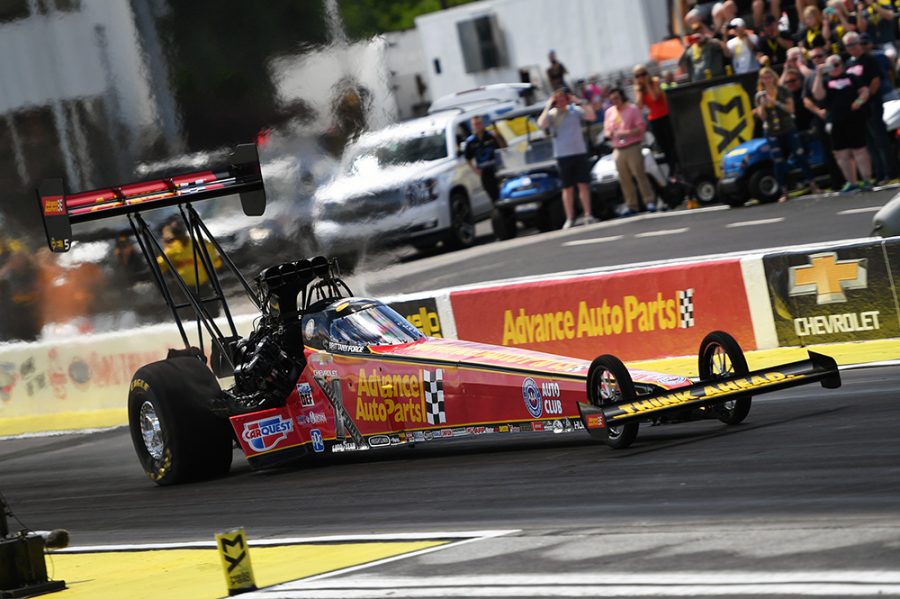 DINWIDDIE, Va. (May 15, 2019) — Brittany Force and the Advance Auto Parts team are headed to the Virginia NHRA Nationals fueled by their consistent performance that’s earned them a spot at the top of their category just eight races into the 2019 NHRA Mello Yello Drag Racing Series season schedule.

Force and the Advance Auto Parts team led the pack at the recent NHRA Southern Nationals in Commerce, Ga. She took the No. 1 spot after putting up a 3.720-second pass at 319.52 mph during Friday’s qualifying under the lights. It was her third No. 1 qualifier of the season and first at the facility. Force swept her way to her third final round appearance with three stellar runs in the .80s but fell short of taking home the Wally to reigning world champion Steve Torrance who tallied his second consecutive victory.

“I’ve been building my confidence with this team and they’ve given me a great race car. We almost had it in Atlanta and were the No. 1 qualifier and finished second, but I’m proud of these boys,” said Force. “I’m very impressed with this team and everything we’ve accomplished. My crew chiefs David Grubnic and Mac Savage are incredible to work with. They have this car running amazing and I’m excited to see what we can pull off in Richmond.”

Force moved her way into second in the NHRA Mello Yello points standings with her No. 1 qualifier and runner-up finish at the Southern Nationals. It was her second runner-up finish of the season, the first coming at the DENSO Spark Plugs Four-Wide Nationals in Las Vegas and third No. 1. Force was also quickest in qualifying at the 50th anniversary Gatornationals and SpringNationals.

At last year’s Virginia Nationals at Virginia Motorsports Park, the first event since 2009 held at the facility, Force powered her dragster to take the No. 2 qualifier spot but had a first-round exit on race day. This year, she’s looking to add to the John Force Racing wins at the track just outside of Richmond, Va. Father, John Force, sister, Courtney Force and the late Eric Medlen have all celebrated a Virginia NHRA Nationals victories. Virginia Motorsports Park last hosted an NHRA national event in 2009 and was added to the championship tour in 2018.

“After a weekend off, this Advance team is ready to get back on the track. We’re ready to jump back into it and go to the winner’s circle in Richmond,” said Force. “I have an idea of what to expect in the conditions at this track and know we can do good, better than last year. We’re all looking forward to this race and hoping we have a good weekend out there.”