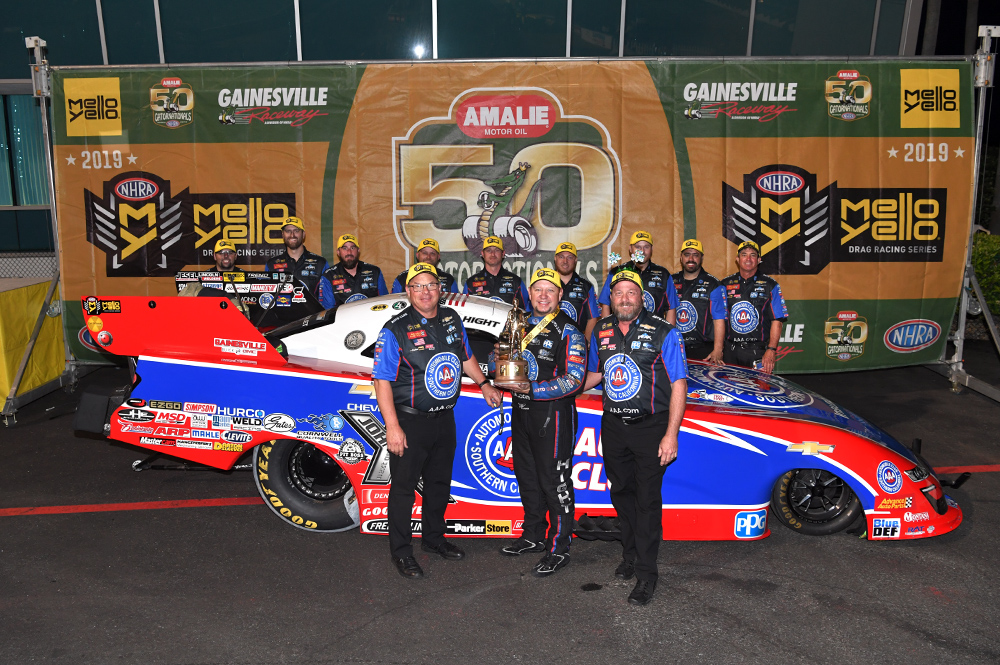 GAINESVILLE, Fla. (March 17, 2019) — Robert Hight defeated a slew of veteran drag racers on his way to winning the Amalie Motor Oil 50th NHRA Gatornationals at Gainesville Raceway on Sunday evening. The two-time world champion and his Auto Club of Southern California Chevrolet Camaro SS Funny Car team put together a series of four 3.8 passes to pick up his 47th career victory, fourth at the Gatornationals and second this season.

“This is huge. This is my fourth time winning here now. This is a big one. The 50th, there will only be one of these. It seems like my boss, John Force, always wins the big races. We’ve had a 50th anniversary race for NHRA at Pomona in the summer and the big race with Winston Showdown Battle back in the day when he ran the Superman car. He just seems to win all the cool races but I finally got one,” Hight said. “This is a cool race to win and especially with everybody at this race. Anybody of ‘whose who’ of drag racing was at this event. A lot of the people I’ve looked up to growing up as a kid were here and, now, I’m here holding the trophy and they’re watching me. It’s kind of a cool thing.”

First in Hight’s path to victory was long time racer Terry Haddock whose quickest run of the weekend at 4.234-seconds and 284.03 mph wasn’t enough for the 3.869-second, 331.94 mph set-up crew chiefs Jimmy Prock and Chris Cunningham put into the Auto Club hot rod.
Next in line for Hight was 2016 world champion Ron Capps who got into trouble early on the quarterfinal pass. Capps was up in smoke at the hit, reaching about 60-feet before having to shut off. Hight was unphased, crossing the finish line at 3.870-seconds and 330.88 mph.

His two round wins would line him up with a familiar foe this year, team owner John Force. While Force had been putting on a show of his own on race day, his 3.942-second pass at 324.12 mph was no match for Hight and the Auto Club Camaro’s stout 3.852-second run at 331.20 mph. The duo has faced each other in eliminations each of the first three races in the 2019 season. At the Arizona Nationals in Phoenix just two weeks ago, Hight delivered a second-round exit to the 16-time champ. At the Winternationals in Pomona, Calif., Hight would defeat Force in the semifinals and go on to win the race.

“John probably is not going to want me going to Vegas next week because I beat him the first three races,” Hight said. “We have to qualify different. It would be cool if we were racing in the final, but when you go to the semis you still know a Chevrolet is going to win. It could have gone either way. That car and that team are really stepping up. John’s going to get some wins. His 150th is coming, I know it is. It’s a lot of fun right now in our camp because all our cars are running well. It’s probably the most I’ve had in a long time.”

In the finals, Hight faced-off with Tim Wilkerson. Wilkerson was the No. 2 qualifier making it the first time in the 50-year history of the race that the top two Funny Car qualifiers would meet in the final round. Hight had the starting line advantage, even if by accident, and left Wilkerson behind who went up in smoke and had to shut off. Hight took home the victory with a 3.867-second pass at 331.61 mph.

“Tim Wilkerson, I talked to him last night and I told him I’d been watching and that he’d had great lights through qualifying. He told me he poured a new seat and got more comfortable in the car, and, really, he had the best lights of any Funny Car driver in qualifying. He said he wasn’t happy with the way Phoenix went so went home and worked on his car and the way he sat. So, I knew going up there, I was going to have to be on my game,” said Hight. “I got a little antsy. It was a long tree and I started to go and caught it, then went all the way down. I had a .31 light, it’s a good thing I didn’t deep stage because sometimes, in the final round you deep stage and it doesn’t matter, you’re not looking for lane choice next round. I think I got away with one, I’ll be honest with you.”

As Hight’s second win of the season and with three No. 1 qualifiers under his belt, the two-time world champion isn’t holding back his excitement for the season ahead.

“I’ve never seen a fuel car so consistent as what I have right now, especially a Funny Car. If you take last night’s qualifying run and the first two rounds, they were two thousandths apart for all three runs. Then we broke out basically in the semis at a .85 then back to an .86 in the final round,” explained Hight. “Jimmy Prock is on it. He and Chris Cunningham are really happy with the clutch package we have and they keep talking a lot about how my car ran in 2017. It just responds and it repeat so that’s a good sign. We have enough of these clutch parts to go all year long. It’s not like midway through the year we’re going to have to switch a combination. We’re going to refine it and hopefully it gets better and better.”

John Force, the winningest nitro class driver at Gainesville Raceway, started eliminations with an impressive 3.892-second pass at 326.63 mph in his PEAK Coolant and Motor Oil Chevy Camaro to defeat Jim Campbell who had to shut off early. Force would go on to take the win in the second round with a 4.471-second pass at 185.95 mph when rival Matt Hagan smoked the tires. Going into the semi-finals he was once again paired with teammate and president of John Force Racing, Robert Hight. Although he came in with a quicker reaction time of .052 to Hight’s .066, it wasn’t enough for the win. This would mark the third consecutive race where the Force would end his race day to Hight but it isn’t something the legend is concerned about.

“My race car is starting to come around. It wasn’t the Gainesville that I hoped for but if you look at positives and negatives, the race car that took me out in the first three races was my own car, Robert Hight and the Auto Club Chevy Camaro,” said Force. “I guess you can’t complain about that but my car is fast and I need more seat time, and we’ll get this thing where it needs to be. We’ll keep PEAK in the hunt and all of our sponsors. Its good to have DENSO Auto Parts, Baldwin Filters, Cornwell Tools, Pit Boss Grills and Montana Brand / Rocky Mountain Twist all joining us this year. We’ll see where it goes.”

No. 1 qualifier Brittany Force and the Advance Auto Parts team made a stellar pass in round one of eliminations. Force, who won her first career race at Gainesville Raceway in 2016, had a starting line advantage and ran 3.712-seconds at 304.12 mph defeating Chris Karamesines who had to shut off early. The 2017 Top Fuel champion made a quarterfinal appearance in what was a close match-up to T.J. Zizzo, who she’s faced once before and won. Force powered her dragster to a 3.751-second pass at 326.95 but fell only so slightly to Zizzo’s holeshot win of 3.764 at 325.92.

“I’m very happy with this weekend and my Advance Auto Parts team. We qualified No. 1 and we had four solid passes down the race track, a .90, .80, .71 and then a .68 which put us number one. We’ve had a great race car and we’ve really turned it around and figured it out,” said Force. “We got past first round and even had a good car second round, but I got beat on a holeshot so I’m going to take that home and figure out how to improve it and fix it so it doesn’t happen again. My guys gave me a great race car and I felt like I didn’t give them the best driver so it’ll all come together as it’s supposed to. I’m pumped and ready to go to Four-Wide in Las Vegas and see what we can do there.”

Austin Prock and the Montana Brand / Rocky Mountain Twist team had an early exit on race day during round one of eliminations. Prock ran a 3.996-second pass at 311.63 mph after shaking the tires and having to pedal his hot rod, but it wasn’t enough against Clay Millican’s 3.713 at 325.61. The Rookie of the Year candidate last came face-to-face with Millican in Phoenix where he was able to take the win over the veteran racer.

“We had our first round one loss today. Obviously disappointed but we’re learning every time we hit the race track,” said Prock. “That was the first time we’ve been on the other side of a shake. We had a fast shake that time and not a slow shake, and I stepped off of it, slapped it back down and got her down there. If (Clay Millican) would have stumbled I think we would have had a round win. I left on him and it was just a tough break. This Montana Brand / Rocky Mountain team is doing excellent and we’re going to be getting some round wins here shortly.”