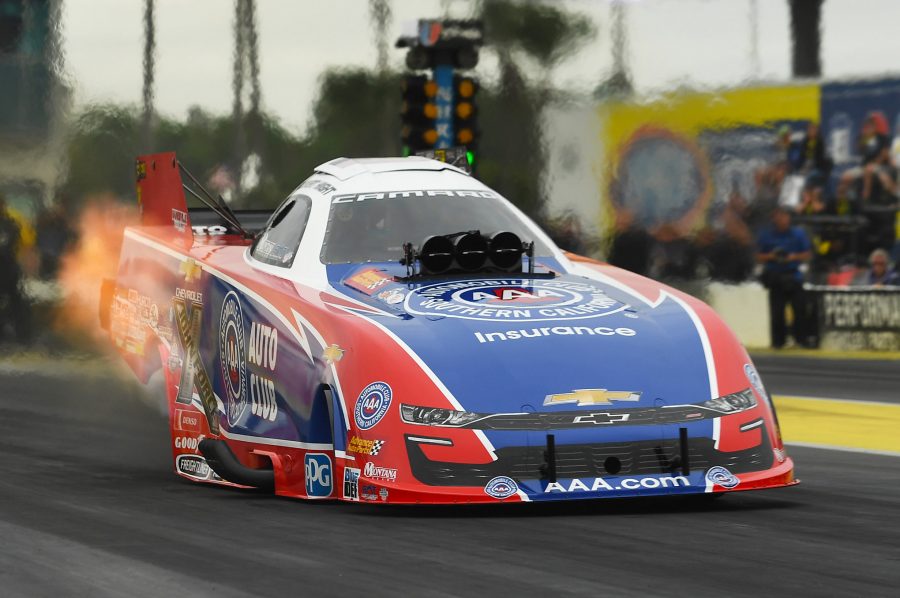 GAINESVILLE, Fla. (March 16, 2019) — Both Robert Hight and Brittany Force made history Saturday night when they secured their No. 1 qualifying positions at the Amalie Motor Oil 50th NHRA Gatornationals on Saturday night. Hight became the first racer to collect three consecutive No. 1 qualifiers in the first three races of the season since Kenny Bernstein in 1987. Force set the Gainesville Raceway track elapsed time record and became the first woman since Shirley Muldowney, 40 years ago, to qualify No. 1 at the Gatornationals. Their teammates John Force and Austin Prock, are starting race day from the No. 4 and No. 10 positions, respectively.

Hight started the 2019 NHRA Mello Yello Drag Racing season with the same fire he finished 2018 after falling short of a second consecutive championship in the last race day of the year. Coming into the season opening Winternationals, Hight nabbed the No. 1 qualifier and was unstoppable on race day where he collected his 46th career victory. In Phoenix it seemed he would repeat his performance with a No. 1 qualifier but finished the weekend in the semifinals.

“It goes back, for my team, to the last day of the season last year where we had the chance to win a championship. We didn’t get it done and that didn’t set well with my team over the winter. They worked really hard in getting this thing prepared and figuring out what our weaknesses were. So far, we’ve been quick everywhere we’ve been. At testing, in Pomona and Phoenix, and now at Gainesville. It’s pretty impressive but it’s not by a lot though.”

After a two-week break, too long according to the two-time champion, nothing has changed. Hight and his Auto Club of Southern California Chevy Camaro SS Funny Car team are continuing to dominate. They kept it consistent and came into the day in the No. 1 spot. Hight and team had an impressive 3.899-second pass at 330.88 mph enough for the third spot, putting him behind team owner John Force in the third session.

With their final run of qualifying, anyone who knew Jimmy Prock and Chris Cunningham could predict they’d be running for the No. 1 spot and they did not disappoint. It was 3.868-second pass that landed them at the top of the class once again and in a match-up with Terry Haddock to begin race day.

“It’s pretty impressive but we aren’t up there by a lot though. Tim Wilkerson was close but I think the first two races I had a little bit on the field and they’re starting to catch up to us so that’s what happens when you start running really well. You make the others press hard,” said Hight. “The trick is for us not to let up and keep pressing hard ourselves, and try to stay on top but qualifying’s over and we got a race to win. It’s a big race, the 50th anniversary Gatornationals. That would be one cool trophy that we’d want to put on our mantel.”

Brittany Force and her Advance Auto Parts team seem as if they have overcome the learning curve that was prescribed for them at the beginning of the 2019 NHRA season. Force was faced with making more than just a change to the color of her hot rod to match with new sponsor Advance Auto Parts during the off season. New crew chiefs David Grubnic and Mac Savage came on board at the opening of 2019 and were tasked with making the conversion from Alan Johnson Racing parts to John Force Racing parts.

“We all saw what Grubnic did last season and he’s incredible. I’m proud to be teamed up with him. He’s incredible to work with. I’ve never worked with a crew chief like him. He’s driven one of these things so it’s a whole different world being able to talk to a crew chief who has been behind the wheel. It makes us connect on a different level,” said Force. “Being able to talk to him is key. Again, because he’s been in one of these things, he knows what the pressure is like. He knows what it’s like when you’re up there and staring down the track. He’s been there and done it all so being able to have conversations with him and to get advice from him, I’m really lucky.”

The transition seemed rocky but there were glimpses of what could be, a 3.700-second pass at preseason testing, a 3.696 pass in qualifying at the Winternationals and a 3.768 pass in the first round of eliminations at the Arizona Nationals. Now at the third race of the 2019 campaign, Force made four consecutively improving passes that started with a 3.904-second pass and 3.800-second pass Friday, to a 3.718 run at 328.86 on Saturday afternoon and ended with a beautiful 3.680 pass at 326.32 mph as the last pair down the track on Saturday evening. With the effort, Force has claimed her first No. 1 qualifier of the season, 11th of her career and first at Gainesville Raceway.

“We’ve been struggling the last two races and the plan coming here was to start out playing it safe. Once we picked up that run and got information, we could build on that and that’s what we did. We’ve improved every single run and ran a .90, .80 and .71, and then this last run,” said Force. “I’m very proud of the entire Advance Auto Parts team and my crew chiefs David Grubnic and Mac Savage. They told me they’d give me a race car and that it was going to do that on the last run, and Grubnic pulled me aside and told me that it was going to be fast and to hold on.

“We’re sitting No. 1 and this is the best position possible. We’ve had four solid runs down the race track and learned from every single one of them so we really have the best shot out there. Again, I have to give it up to my entire team,” continued Force. “This place is a special one for me. I had my first win here back in 2016 and I’ve been coming here since I was a kid, so I love this race track and I’d love to do it again.”

Force will begin her battle for the Wally against veteran Chris Karamasines.

John Force and the PEAK Coolant and Motor Oil team put on a strong performance through the final two qualifying rounds. Force opened the day with a 3.897-second pass at 331.94 mph that put him momentarily in the No. 1 position. He entered the final session in the No. 2 position but would move down two spots to No. 4 after spinning the tires and crossing the center-line resulting in no time for the final qualifying run of the weekend.

Heading into Sunday’s race, the winningest driver in NHRA history is no stranger to the winner’s circle at Gainesville Raceway. He’s had eight victories at the historic track, the most by any driver in the nitro classes, and will be chasing his 150th Funny Car victory when he lines up tomorrow against Jim Campbell.

“We had a good weekend of qualifying. Brittany and Advance are the No. 1 qualifier in Top Fuel and so is Robert with Auto Club in Funny Car. The Prock kid did a good job and is No. 10 with the Montana Brand / Rocky Mountain Twist dragster. I had some pretty good runs too and am the No. 4 qualifier with PEAK. It was a weekend of qualifying we were looking for and going into tomorrow we’re looking to get some round wins,” said Force. “It’s the 50th anniversary of the Gatornationals and would be a big one for any of us. And you know, I’m chasing 150 so that would be a big one for me too.”

Austin Prock continued to make progress during the final two qualifying sessions of the Gatornationals. A solid 3.758-second run at 330.15 mph in his Montana Brand / Rocky Mountain Twist dragster put the rookie of the year candidate in eighth heading into the fourth qualifying session, two spots up from Friday night.

The son of championship tuner Jimmy Prock, who crew chiefs Robert Hight’s Chevy, didn’t improve in the final qualifying session but stayed consistent running 3.769-seconds at 327.11 mph. With three quality passes under his belt at Gainesville Raceway, Austin is feeling confident heading into eliminations in the 10th position where he’ll line up with Clay Millican in round one.

“We had another good weekend of qualifying. In Q3 we ran another big mile per hour for this Montana Brand / Rocky Mountain Twist dragster with that 330,” said Prock. “In the last run we slowed down a bit. It wasn’t what we were looking for but we had another good run down the race track to grab data from. We don’t have very many runs under our belt in this thing so we’re learning every time. We can go A to B and tomorrow we should be able to get some round wins.”

Eliminations at the Amalie Motor Oil 50th NHRA Gatornationals will begin Sunday morning at 11 a.m. Fans will be able to catch the action on FOX Sports 1 (FS1) at 7:30 p.m. ET.