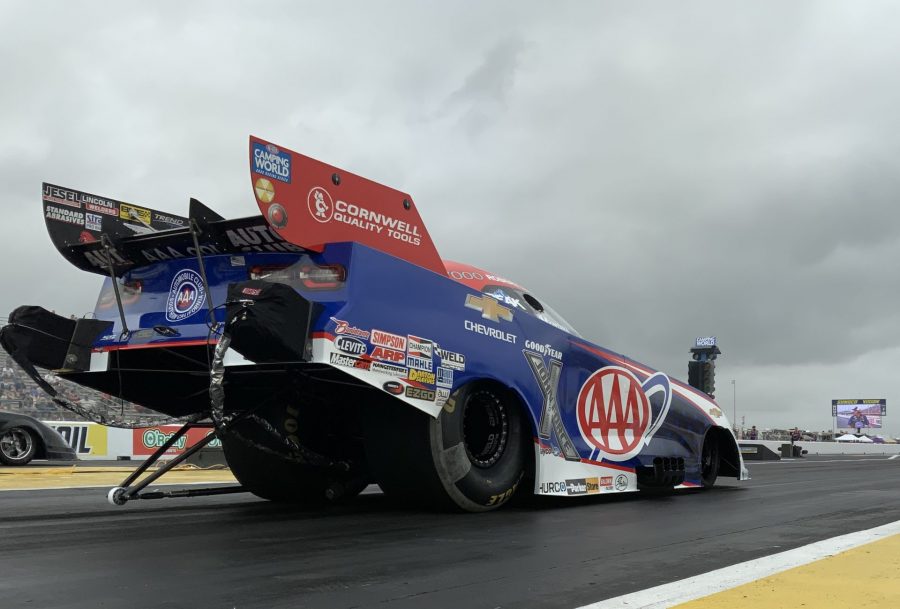 BAYTOWN, Texas (May 22, 2021) – Robert Hight and the AAA Texas Chevrolet Camaro SS team took advantage of a shortened qualifying session to secure the No. 5 spot at the Mopar Express Lane NHRA SpringNationals at Houston Raceway Park on Saturday. Due to weather, qualifying was reduced preventing the John Force Racing hotrods from making a second run. Brittany Force and her Monster Energy team secured the No. 6 spot while John Force and the PEAK / BlueDEF PLATINUM Chevy landed in the No. 9 spot.

The AAA Texas Chevy made a solid pass of 3.954 seconds at 324.05 mph that momentarily was quickest of the session. Hight was bumped to the No. 2 spot heading into what was supposed to be the second qualifying session. Midway through the Funny Car field, rain heavily hit the track and NHRA officials called it a day but not before Hight and the AAA Texas team were shifted down to the No. 6 spot. They’ll face Bobby Bode in the first round of eliminations.

“We’ve figured this AAA Texas Chevy out a bit,” said Hight who ended a streak of tire smoke-ridden runs. “We really could have used that second run but I’m glad we got one in. We’ll be good and I’m feeling good about going into race day tomorrow.”

Following a No. 1 qualifying position and a runner-up finish at last weekend’s NHRA Four-Wide Nationals in Charlotte, Brittany Force and the Monster Energy team were aggressive with their one run on Saturday. Unfortunately, they were asking for too much and the Monster Energy dragster had tire smoke and shut off early to run 4.039-seconds at 215.96 mph for the sixth qualifying spot. They’ll see Doug Kalitta lined up next to them in the first round on Sunday.

“We ended up No. 6 to pair up with Doug Kalitta tomorrow. It’s going to be tough; it’s going to be tricky, not a lot of cars got down there, we didn’t, we smoked the tires and the car shut me off, so we have our work cut out for us tomorrow,” Force said. “With this Monster Energy / Flav-R-Pac team I think we’ll be good. We went some rounds last weekend and looking to do it again tomorrow.”

Most recent event winner John Force and the PEAK / BlueDEF PLATINUM Chevy Camaro team find themselves in the No. 9 spot after smoking the tires on their 4.000-second pass at 275.84 mph. Force will match-up with J.R. Todd to open eliminations.

“Rain was a threat all weekend. Glad we got that one session in and tomorrow looks good,” Force said. “We’re all in the show, got some work to do tomorrow. The PEAK team we’ve been on a roll and we’re looking to keep it going for BlueDEF PLATINUM, Chevy, Cornwell Tools, ParkerStore and all our sponsors.”

Eliminations at the Mopar Express Lane NHRA SpringNationals begin Sunday at noon CT. Catch the action with television coverage from FOX Sports 1 on Saturday at 10 p.m. ET and Sunday at noon and again at 6 p.m. ET.