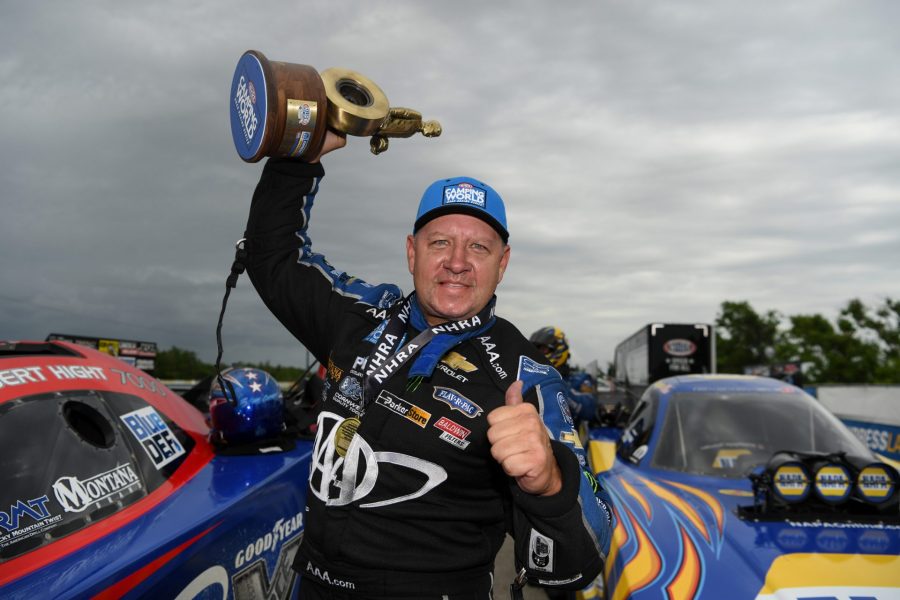 BAYTOWN, Texas (May 24, 2021) – In true three-time championship team fashion, Robert Hight and the AAA Texas team had the ultimate bounce back when they raced to their first victory of the season at the Mopar Express Lane NHRA SpringNationals at Houston Raceway Park on Monday. Brittany Force and the Monster Energy team and John Force with the PEAK / BlueDEF PLATINUM Chevy team had early exits in the first round.

After two races of fighting gremlins and early race day exits, Robert Hight and the AAA Texas team entered race day having taken advantage of the lone qualifying try to qualify No. 5. They were set to match up with Bobby Bode in the first round but due to inclement weather, the race was delayed to Monday and Bode opted to exit the competition. Now with a bye run, Hight handled the AAA Texas machine to a 3.933-second pass at 328.94 mph for lane choice over Cruz Pedregon in the second round.

In the finals, Hight and the AAA Texas Camaro matched up with veteran racer Ron Capps. Hight kept it consistent hitting the finish line at 3.916-seconds and 327.19 mph as Capps smoked the tires to a 4.684-second pass at 179.25 mph. The victory marks Hight’s 52nd career win, fourth at Huston Raceway Park and ties him with Top Fuel driver Joe Amato for 12th on the all-time win list.

“This was truly a team effort. John’s team, the PEAK team, they really helped us in Charlotte when we tested on Monday. The Auto Club team went to the final in Gainesville, we were running good, go to Las Vegas running good, and it just shows you how finnicky these cars are. We go to the next two races, and we can’t even get down the track. We were trying some things that worked at Gainesville and Las Vegas, but they did not work at Atlanta and Charlotte. So, we kind of had to regroup with the help of the PEAK team because they were the class of the field and they won Charlotte,” Hight said. “We came here and it really paid off. I honestly was nervous. We made the first qualifying run and didn’t get the second in because it rained. We’re going into race day a little on the green side with a new combination, but with a team effort and everybody working together it paid off. It was a little slow first round, but (crew chiefs) Jimmy Prock and Chris Cunningham they kept picking it up a little every run. We finally got to where we needed to be the last two rounds. We had a really great race car.

“I love racing Ron,” continued Hight who now sits tied for fourth in points. “There’s never, ever any games. It’s almost like a race to stage. We both lit the lights at the same time, which I normally hate. I like it when one goes in before the other. Because when you both go in, it kind of throws you off a little. I didn’t see him the whole way. I had a good light, he did, too. But to hear those guys on the radio that we won, and I saw the win light down there, it brings me back to my first win here in 2005, which was my first race. I was in the left lane and got my first win. I remember how excited I was to hear the crew chief tell me that we won. It’s a great day. A lot of hard work goes into these and this time of year is where you’re learning but you want to get back to the winner’s circle. That win light comes on and there’s not a feeling like it. It’s amazing. Can’t wait for the next one now.”

After qualifying No. 6 with only 1 pass down Houston Raceway Park and then having to wait until Monday morning to race, Brittany Force and the Monster Energy Top Fuel dragster team ran into tire smoke. Force and her opponent Doug Kalitta were the lone pair of Top Fuel dragsters left to run the first round before rain hit the track on Sunday. Force’s 4.738-second pass at 171.69 mph wasn’t enough for Kalitta’s 3.765 run at 281.01 mph.

“It was a little bit of a tough weekend for this Monster Energy team. We only got the one qualifying session and race day was in the car, out of the car, just back and forth. And that takes your mind out of the game,” said Force who is fourth in points. “It’s hard to keep your focus mentally for the driver, the crew chief, everybody onboard. Unfortunately, we got beat in the first round. We’ll head to Epping and we’d love to get our first win of the season there.”

John Force and the PEAK / BlueDEF PLATINUM Chevy Camaro SS team will maintain their No. 3 championship points position despite a first-round exit at Houston Raceway Park. Force’s Chevy started to haze the tires, but he managed to stay with it to run 3.971-seconds at 323.35 mph. They were bettered by J.R. Todd’s 3.916 at 327.43.

“Couldn’t get the win in the PEAK Chevrolet. Charlotte was a great weekend and not so good here for us,” Force said. “But Robert Hight made up the difference by putting Brittany (Force) and I both in the winner’s circle with him and all our sponsors, that’s what it’s all about.”