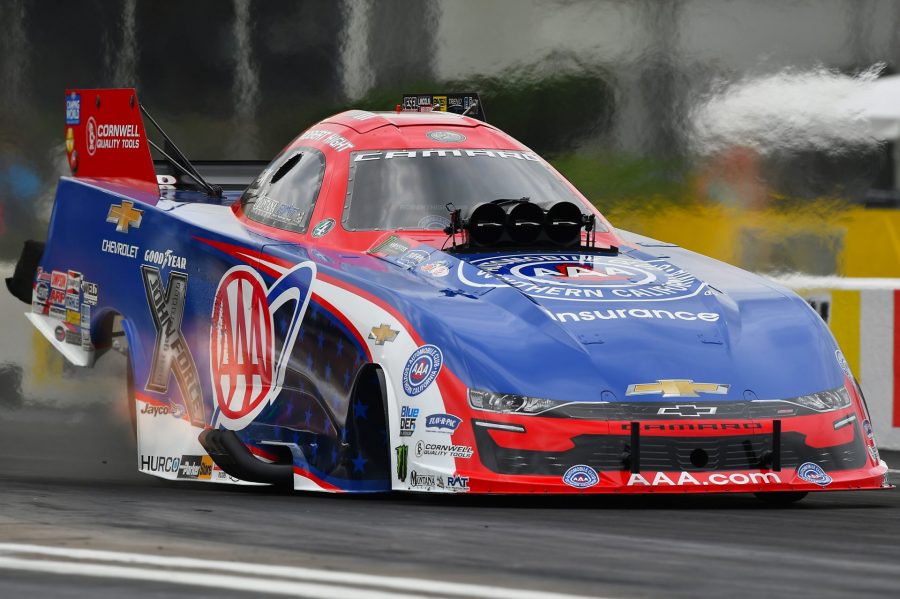 EPPING, N.H. (June 09, 2021) – Robert Hight and the AAA New England Chevrolet Camaro team are coming into the TascaParts.com NHRA New England Nationals tied for fifth in points after jumping four spots when they ended a string of bad luck with their first victory of the season at the NHRA SpringNationals in Houston. They’ll look for another jump in points as they head to New England Dragway in Epping, N.H. June 11-13.

Hight and the AAA New England team started the 2021 NHRA Camping World Series season with a runner-up finish at the Gatornationals and in Las Vegas, the first four-wide event of the season, they were quickest each of the qualifying rounds and bettered themselves with low ET of the event during the first round of eliminations. It was in Atlanta at the NHRA Southern Nationals that the team ran into trouble to only qualify 12th and have a first-round exit. The gremlins continued at the four-wide event at zMAX Dragway, Hight and the AAA team qualified 15th and had another early exit.

After two disappointing race finishes, the AAA New England team were back in championship form when they raced to their first victory of the season at Houston Raceway Park. The 52nd win of Hight’s career tied him with Top Fuel driver Joe Amato for 12th on the all-time win list.

“That win was hard fought, the AAA team earned it, but it was a real team effort with John (Force)’s PEAK team helping us test in Charlotte. We were trying some things that worked at Gainesville and Las Vegas, but they did not work at Atlanta and Charlotte. So, we kind of had to regroup with the help of the PEAK team because they were the top class of the field and they won Charlotte,” Hight said. “We were going into race day in Houston a little on the green side with only one qualifying run on a new combination, but with a team effort and everybody working together it paid off. It was a little slow first round, but (crew chiefs) Jimmy Prock and Chris Cunningham they kept picking it up a little every run. We finally got to where we needed to be and had a really great race car.”

Hight and the AAA New England team will be chasing their first win as they head to New Hampshire and New England Dragway for the NHRA New England Nationals. Hight holds both ends of the track record at 3.822-seconds and 336.74 mph both set in 2017. The Chevy Camaro team have never qualified outside of the top 10 and have two No.1 qualifiers that came in 2014 and 2017.

“A lot of hard work goes into these cars and these wins. Right now, this time of year is where you’re learning. We’ve learned a lot so far. We’re going to take that knowledge with us to New England Dragway and try to capitalize,” Hight said. “This AAA team wants to get back to the winners circle. We want to see those win lights come on. There’s not a feeling like it. It’s amazing. We can’t wait for the next one now.”

Qualifying at the TascaParts.com NHRA News England Nationals begins Friday evening at 6:15 p.m. ET and continues Saturday with sessions at 1:15 and 5 p.m. Eliminations are slated to begin at 11 a.m. Television coverage of qualifying will air Sunday at noon on FOX Sports 1 (FS1). Eliminations will air on FOX Broadcasting Network on Sunday at 1:30 p.m.