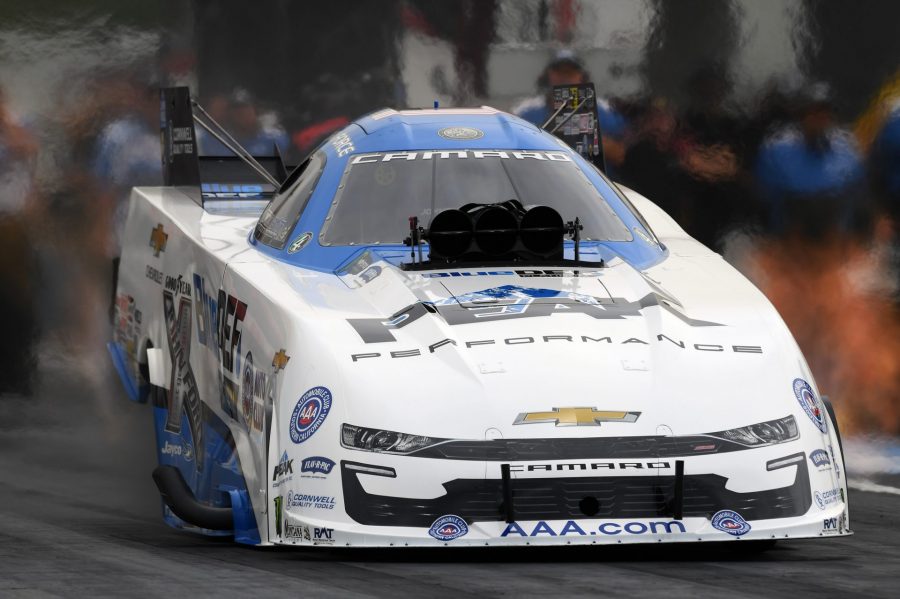 EPPING, N.H. (June 09, 2021) – A strong and consistent start to the season has John Force and the PEAK / BlueDEF Chevrolet Camaro SS team sitting comfortable in the top three of the NHRA Camping World Championship points standings as they head to New England Dragway for the TascaParts.com NHRA New England Nationals June 11-13.

In the first four events of the 2021 season, Force and his Daniel Hood and Tim Fabrisi led PEAK / BlueDEF team had steadily worked their way to victory starting with a quarterfinal finish at the season opening Gatornationals. At the first four-wide event of 2021 at The Strip at Las Vegas Motor Speedway, Force would qualify No. 2 and at the NHRA Southern Nationals at Atlanta Dragway, Force and his PEAK / BlueDEF team would make their 257th final round appearance. Force earned his 161st No. 1 qualifying position before continuing his dominance into race day at the NHRA Four Wide-Nationals at zMAX Dragway and coming out with his 152nd national event victory.

Heading to New England Dragway, Force will be looking to get back to his consistent and steady form after a first-round exit at a rain plagued NHRA SpringNationals in Houston.

“We had momentum coming off a win in Charlotte but couldn’t get the win in the PEAK Chevrolet in Houston. Charlotte was a great weekend, all the hard work was paying off, but it was not so good for us in Houston. Luckily John Force Racing still left with a win thanks to Robert Hight and AAA,” Force said. “Just some bad luck, one bad weekend, but it doesn’t define how hard this team has worked, how hard I’m working to keep up with these guys and take this great PEAK / BlueDEF car some rounds.”

Force has raced his way to two final rounds at New England Dragway, the first was the inaugural race in 2013 where he earned the No. 1 qualifying spot but lost in the finals to daughter Courtney Force. It was the first time they had ever faced each other in a final. John would go onto win in 2015.

“Love going to New England, love the area, the fans always come out strong. We’ve had some success there,” Force said. “It’s been a good season so far. Already got a win and once that happens you’re even more motivated. My PEAK team, these guys, they’re hungry. We’ll go out there, qualify well, go some rounds on race day and hopefully come out with another win for PEAK, Chevy, Cornwell Tools, Jayco, ParkerStore and all our partners.”

Qualifying at the TascaParts.com NHRA News England Nationals begins Friday evening at 6:15 p.m. ET and continues Saturday with sessions at 1:15 and 5 p.m. Eliminations are slated to begin at 11 a.m. Television coverage of qualifying will air Sunday at noon on FOX Sports 1 (FS1). Eliminations will air on FOX Broadcasting Network on Sunday at 1:30 p.m.