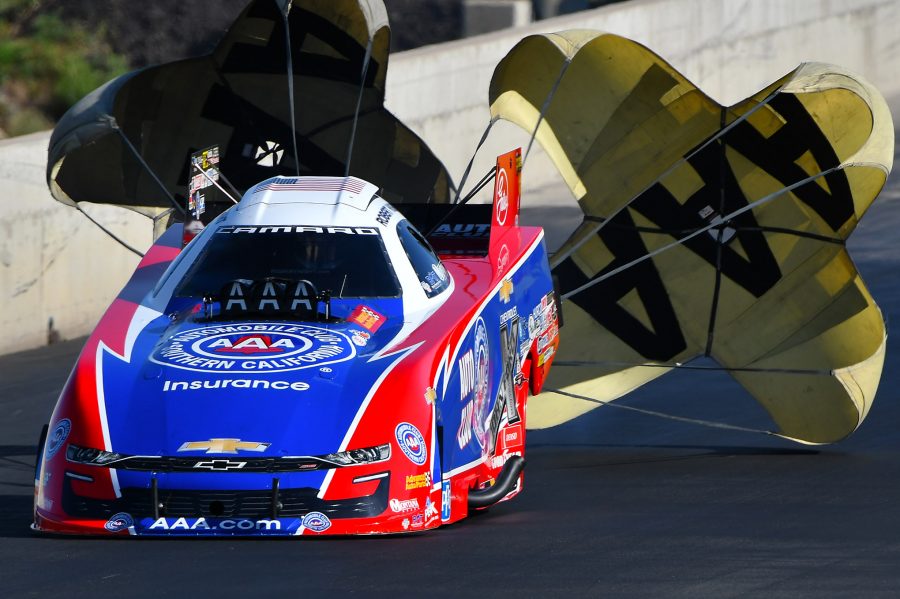 With a 149-points lead on the Funny Car class that’s now extended through the first 14
events on the Mello Yello tour, Hight and the Auto Club team have locked in their spot in the Countdown to the Championship thanks to their recent semifinal finish at last weekend’s Mile-High Nationals. The two-time Funny Car world champion has collected four wins, two runner-up finishes, three semifinal appearances and seven No. 1 qualifiers this season to dominate the field. Hight has also padded the NHRA history books twice this year with two of his green hat starts. At the historic Gatornationals he became the first driver since Kenny Bernstein in 1987 to be the No. 1 qualifier at three back-to-back events, and at the Southern Nationals was recognized as the first since 1987 to clinch the top spot in five of the first seven events.

At the recent event at Bandimere Speedway outside of Denver, Colo., Hight posted the low E.T. and top speed of the weekend when raced his Jimmy Prock and Chris Cunningham tuned Chevy Camaro to 3.976-seconds at 326.16 mph. The pass landed the driving veteran into the No. 1 qualifying spot for the seventh time of the season and 67th in his NHRA career. On race day, Hight powered his way to the semifinals but fell short of making his fifth final-round to race runner-up Bob Tasca III.

“These Auto Club guys are continuing to work hard and Jimmy Prock and Chris Cunningham know what they’re doing. We brought out a new car a couple races ago and it’s only a matter of time before we are right back to winning races,” Hight said. “Hopefully it’s right in time for the Countdown, just a couple races left. We’ll be ready.”

At last year’s Sonoma Nationals, Hight handled his Auto Club hot rod to the winner’s circle for the second time at Sonoma Raceway. The veteran driver’s first win at the facility came in 2008 and he’s also qualified No. 1 twice in 2006 and 2017, the same year he won the Championship. Hight also set the track records for elapsed time and top speed in 2017 with a 3.807-second pass and a blistering speed of 339.87 mph, that also earned him the national event record.

“I love coming to Sonoma. This is a special place for me. It’s a home race, I’m from Alturas, Ca. We’ve won here before and we won it last year, but I set the speed record here too,” Hight said. “Now, coming in from Denver, after the season we’re having, I’m feeling good about this weekend.”