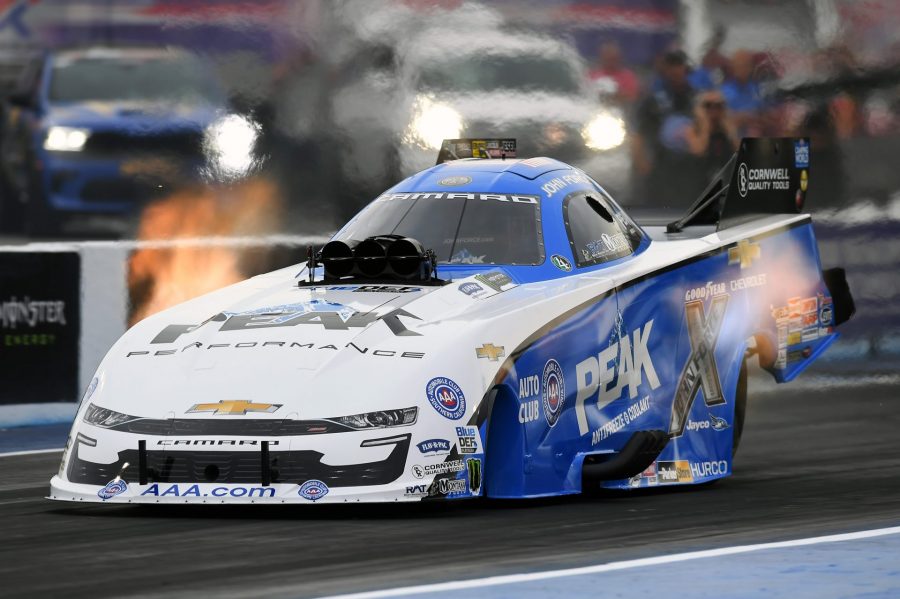 MADISON, Ill. (Sept. 26, 2021) – John Force and the PEAK Antifreeze and Coolant Chevrolet Camaro SS Funny Car led John Force Racing with a semifinal finish Sunday at the NHRA Midwest Nationals at World Wide Technology Raceway. Brittany Force and the Monster Energy team raced their way to the second round and Robert Hight and the AAA Missouri Camaro had a first round exit.

After struggling in qualifying to enter race day from the No. 10 spot, John Force and the PEAK team came up with some big wins with Championship implications. They had some luck in the first round when three-time champion Robert Hight idled to the finish line. Force would run 3.970-seconds at 315.30 mph for the win. In the second round, veteran Ron Capps, who was the points leader coming into the day, was unusually late on the starting line with a reaction time of .121-seconds to go with his 3.854-second pass at 326.56 mph that was bettered by Force’s .039 reaction time and 3.970 run at 328.70.

The win would line Force up with long-time rival Bob Tasca III in the semifinals. Force would have the starting line advantage but smoke the tires at about 60 feet. His Camaro would make a hard move towards the centerline causing Force to back off the throttle while Tasca’s car loses power at 800 feet. Tasca would get the win with a 4.306-second run at 216.69 mph to Force’s 6.826 at 93.68.

“Well, we went some rounds, kept ourselves up there in the points,” said Force who remains third. “My guys, this PEAK Chevy team, they’ve worked hard, four in a row, it ain’t easy. Big picture, we’re okay. Four races left and we’re still in the hunt for this championship.”

Brittany Force and the Monster Energy team continued their consistency from Saturday’s qualifying in the first round of eliminations. They laid down the third quickest run in Top Fuel history at 3.641-seconds and a track record speed of 337.66 mph to defeat TJ Zizzo and his 4.921 at 144.29 after running into tire smoke.

The victory set Force up with a rematch of the NHRA Carolina Nationals final round. The Monster Energy dragster would put a cylinder out down track slowing Force to a 3.767-second run at 321.27 mph with a startling line reaction time of .091 that was bettered on a hole shot by Josh Hart’s 3.793 pass at 325.69 and his .061 reaction time.

“Tough day for this Monster Energy / Flav-R-Pac team, getting beat in the second round,” Force said. “We had a hole out, but I also wasn’t there on the starting line. There’s still four races left in this Countdown and that’s plenty of time for us to regroup and move forward.”

Robert Hight and the AAA Missouri Chevrolet Camaro will stay tied with Tim Wilkerson at seventh in the championship points standings after Hight miss-stepped at the starting line. The AAA Chevy idled to the finish line recording a 24.203-second pass at 58.41 mph.

“Rough day for this AAA team, we had a good car, made some mistakes,” Hight said. “I think if we keep our heads down, keep doing what we know how to do, including myself in that, we could still pull this off. There’s still time.”

The NHRA Camping World Drag Racing Series Countdown to the Championship Continues Oct. 8-10th with NHRA FallNationals at the Texas Motorplex in Ennis, Texas, just outside of Dallas.