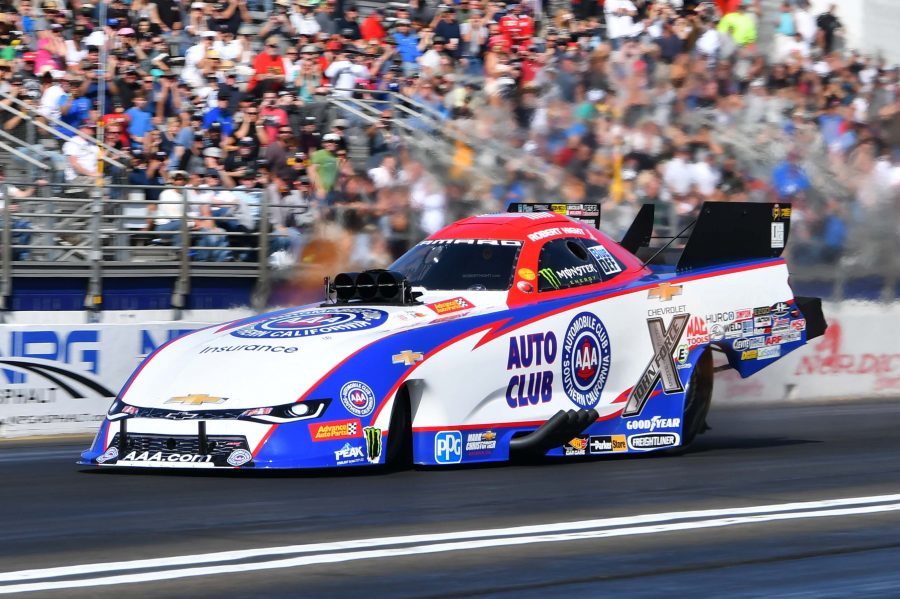 POMONA, CA — Robert Hight led the John Force Racing team at the season-opening 58th annual Lucas Oil Winternationals at Auto Club Raceway at Pomona. Robert carried John Force Racing to the finals at the team’s home track while his three teammates suffered losses in the first round of eliminations.

Hight, the No. 2 qualifier, and his Auto Club of Southern California Chevrolet Camaro Funny Car matched-up against Matt Hagan, the No. 1 qualifier, in the final round of competition at the storied event. Hight powered to a 3.866-second pass at 336.99 mph but was out performed by last year’s event winner with a 3.823 pass at 335.90. Hight’s speed was top speed of the event for the Funny Cars.

“I’m bummed that we didn’t get the win. Close race. We know there’s more left in it. From testing and how we ran, we’re still learning some of these new clutch discs. Good news is two of the four rounds today we were low ET and very consistent,” Hight said. “If you look back a year ago how we started the season to this year it’s night and day. This is going to be a good year. I’m super excited about the way it started. It’s like we picked up where we left off at Pomona (November 2017). Once I won the championship, I learned how to relax. I did that today and I drove really well. I like where this is going.”

Brittany Force escaped serious injury after a racing incident in the first round of Sunday’s eliminations at Auto Club Raceway at Pomona. Force’s Monster Energy dragster went out of control during the pass, made contact with the guard walls and came to rest past the finish line. She was responsive, speaking with medical personnel, and was transported to a local hospital for evaluation.

Force suffered no major internal injuries but does have some bruising of the lungs. A CT Scan was negative and the MRI showed subtle findings likely from previous injuries. She was admitted overnight for observation simply as a precaution.

Much like her father’s explosion on Friday evening, Force’s Simpson safety gear, including her Steilo Helmet, R3 head and neck restraint, fire suit, neck collar and belts, kept her conscious and securely strapped into the driver’s seat.

“You look at how these cars evolved over 40-50 years. We made a lot of changes after the loss of Eric (Medlen, former JFR driver who lost his life in a 2007 testing accident). A lot came out of that. Building better chassis, safer. Want to thank Simpson safety for building helmets, equipment and everything to keep our drivers safe. The car giving way when it hit the wall head on allowed it to take the impact and fold up (as it was designed to do),” John Force said. “I want to thank Schumacher Racing for creating the canopy (over the driver’s seat). When the car was upside down, you know that protects the drier’s head. Want to personally thank Don Schumacher for his investment (in the canopy program). Very important. Thanks, Don. Safety Safari was right on top of it, as always, that’s why they’re the best in the business. Finally, John Medlen, was one of the first to come to me, and want to know if she was okay. I didn’t have an answer at the time. But he’s lived it. He knows what all of us go through: owners, friends, parents and sponsors. End of the day, we keep addressing it to get it better.”

Brittany Force, the No. 2 qualifier, was racing Terry Haddock in the first round when her Monster Energy dragster smoked the tires. Force attempted to pedal her 11,000 hp race car before it took a hard left and made contact with both guard walls.

“The PEAK Chevrolet has been struggling, but my other cars are all fast.  I’m just gonna fix it,” Force said. “Right now we’ve got a lot of work to do.  We’ve sent a team all the way to Indy to get another car for me and another for Brittany.  Phoenix, here we come.”

The Advance Auto Parts Chevrolet Camaro SS Funny Car driven by Courtney Force had a pedal-fest against first round opponent Jonnie Lindberg after watching her sister being transported to the hospital. Lindberg’s car crossed the finish line first with a 4.433 at 262.54 bettering Force’s 4.52 5 at 241.71.

“It’s never easy (to watch a teammate, especially my sister, go through something like that). These cars are unpredictable. I had to get back out there for myself, mentally, and really for my sponsors Advance Auto Parts, for the Chevrolet team, for Peak, for Monster Energy, and for Auto Club of Southern California. We go out there and our job is to win. These cars, anything can happen in them. They are a whole different animal to drive. You try to pedal it and these things want to turn sideways. They don’t pedal like they used to. I gave it my all. I wanted to get that win. My crew chief told me just go out there and drive it with heart and there’s going to be another race next weekend.”