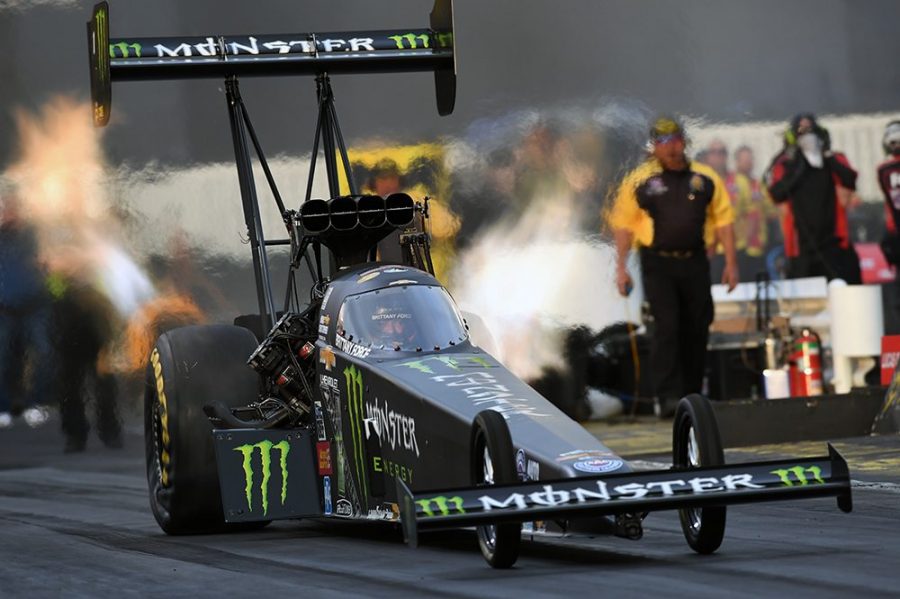 Force, who struggled to get her newly branded No. 1 dragster down the track on Friday, ran a 3.675-second pass at 322.04 mph during the third qualifying session of the weekend to make the move from the 13th spot up to the second.

“Yesterday we just didn’t stick to our normal mindset and that made us look aggressive when we actually were the opposite. Feeling good now,” said Brian Husen, crew chief for the Monster Energy team. “We put it back like it should be and it ran like we should so now we are just going to work on that and try to win a race tomorrow.”

This is Force’s first time qualifying in the second position at the NHRA Mello Yello Drag Racing Series season-opening event.

“I’ve got a great team around me; a great support system. The season starts here in Pomona tomorrow. So, we want that first win of the season,” Force said. “No better place to do it than where we accomplished so much last year, where we became the champions and won the final race of the season. We’d like to start the season off right. We were all right qualifying, we only got down there once, but we’ll take it. It’s a new day tomorrow, we’re hoping to go straight down there and turn on some win lights.”

Force will be lining up against Terry Haddock to open up eliminations. She is 3-0 against Haddock who she beat in the first round of eliminations at the 2017 Winternationals and the 2017 Auto Club Finals.

Two-time reigning world champion Robert Hight will also begin eliminations in the No. 2 position after running a 3.850 at 334.24 in his Auto Club of Southern California Chevrolet Camaro SS Funny Car during the final round of qualifying. Hight has three No. 2 qualifiers at the season-opening event and he’ll be chasing his fourth win at the Winternationals.

“If we had run early numbers like we did (in Q3), it would have been a lot better,” said Hight who in the fall at the Finals was not qualified until the fourth session. “But it’s a good position to be in and it’s a heck of a lot better position than we were three months ago when we were here at Pomona and we ended up in the 15th spot.  So good job to this Auto Club team.”

Hight will race Jeff Diehl, who he has defeated eight of the nine times they’ve faced each other, in the first round of eliminations.

Courtney Force took her Advance Auto Parts Chevrolet Camaro SS Funny Car to the No. 4 spot with her 3.877 pass at 332.84 to open up the day. Force jumped from the eighth spot. She has only one other No. 4 qualifying position at Auto Club Raceway at Pomona, it came in 2012 where she went on to a runner-up finish.

“I feel good. We’re in the top half of the ladder and on opposite sides from my teammates. Running that .87 makes us feel a little more confident,” Force said. “I have confidence in these crew chiefs and this team that we we’re gonna get it fixed up tomorrow. It’s going to be a good first round against Jonnie Lindberg but we’re ready to go. This is the first race of the 2018 season and we’re looking forward to it.  I think we’ve got a really good hot rod with this Advance Auto Parts team.  We’re going to push it hard tomorrow and we’re ready for race day.”

After an eventful Friday afternoon where John Force and his PEAK Coolant and Motor Oil Chevrolet Camaro SS Funny Car experienced an engine explosion that resulted in a precautionary visit to the hospital and a brand-new race car to be brought out, John Force was one of the few Funny Car drivers to get down the track in the third round of qualifying.

“If you look at the history of John Force Racing bottom line, me and Austin Coil used to be on fire every weekend and we would bounce right out and win,” Force explained. “One of my guys said, ‘You blew the body off in Denver and then we won the race.’ Sometimes it is a good omen. (Don) Snake (Prudhomme) and (Tom) Mongoose (McEwen) are my heroes. This is how we did it in the old days. We didn’t have all this protection like Simpson, which has been so good to me, thanks for protecting. I have to thank PEAK and Chevrolet, they will buy me ten of those hot rods, don’t worry about that. We are alive and in the show.”

Force ran a 3.937 pass at 314.75 and wound up in the tenth qualifying position which will have him racing against J.R. Todd in the first round.

“I am content, my car went down the race track, its fast, and my motor is right. I couldn’t quite get there, but I am in the show and I got some great TV for Peak, Auto Club and Chevrolet. I will take it any way I can get it. But I am happy because Courtney (Force) is fast, Robert (Hight) is fast, and Brittany (Force) was second in Top Fuel,” Force said. “We all want to be number one but we can’t. I have a young crew chief in Jon Schaffer and Jason McCulloch. We have a great group of guys and we are going to take this team and we are going to fix it, polish it, make it better and we are going to win races this year. We are going after the championship.”

Eliminations at the Winternationals begin Sunday at 11 a.m. Catch the action live on FOX Sports 1 (FS1) at 2 p.m. ET.