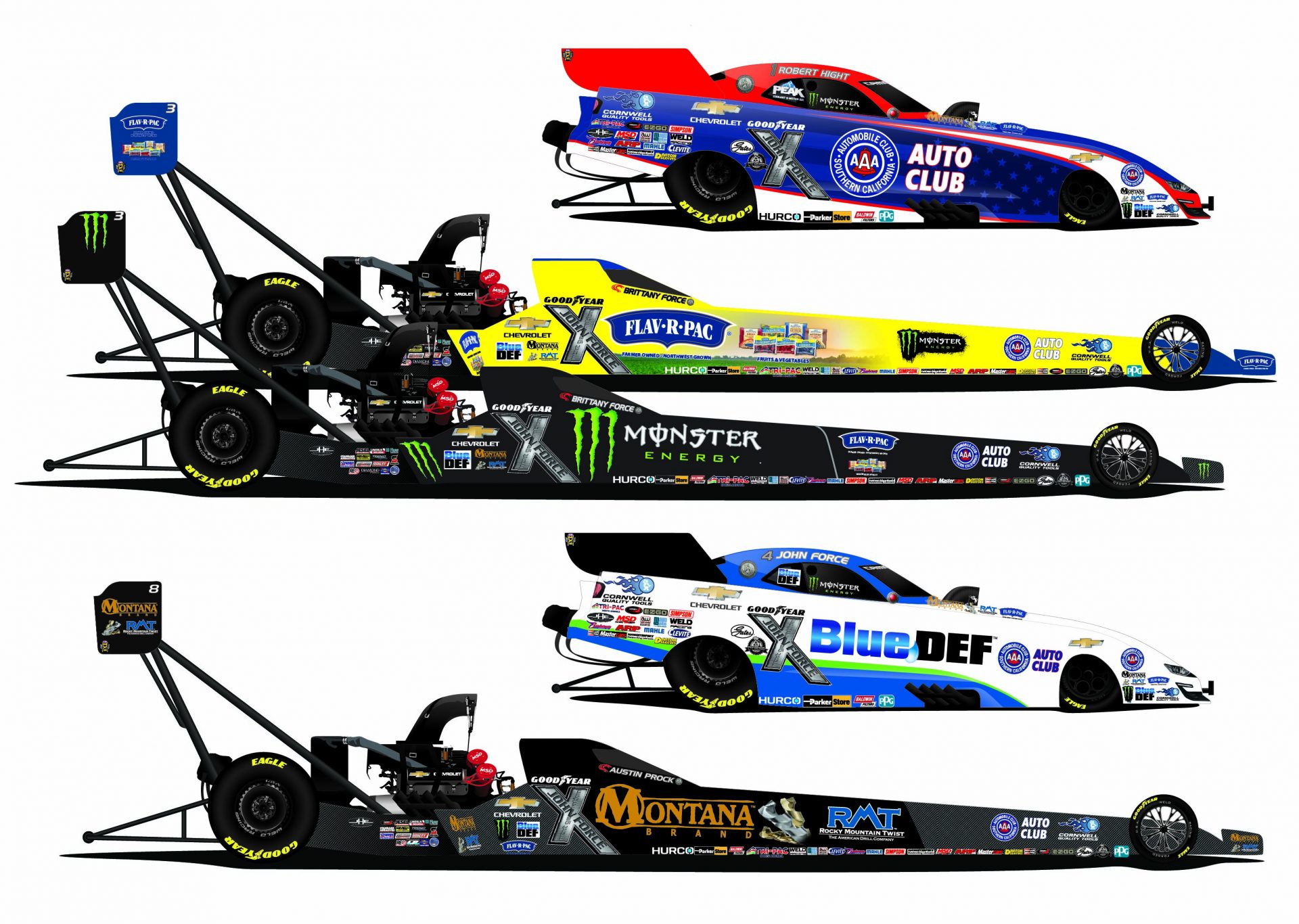 President of John Force Racing and reigning three-time Funny Car world champion Robert Hight will continue to drive the Auto Club of Southern California Chevrolet Camaro SS with his tandem of crew chiefs Jimmy Prock and Chris Cunningham. The trio picked up their third world title in 2019 after earning eight No. 1 qualifiers and winning six races, a career high for Hight. Hight, who has raced for Auto Club of Southern California / AAA for his entire career, won his 50th (and 51st) career victory as well as his 500th round win in what was a historic 2019. The title year comes after winning four races in seven final rounds on their way to finishing second in 2018.

On 16-time world champion John Force’s PEAK / BlueDEF Chevrolet Camaro SS Funny Car, Danny Hood, son-in-law to John Force, will take as crew chief with assistant crew chiefs Ronnie Thompson, who helped tune Austin Prock’s dragster in 2019, and Tim Fabrisi, who was Force’s car chief in 2019. Force will be racing the BlueDEF Chevy Camaro SS for the first 11 races and the PEAK Chevy Camaro SS for the remainder of the season. Force finished fourth in the 2019 NHRA Funny Car points standing. In the hunt for his 17th championship until the final race of the season, Force recorded a historic 150th career victory and just weeks later his 151st at the sport’s biggest single event, the U.S. Nationals at Indianapolis, Ind., for a record-tying fifth time. In 2020, he’ll be trying to improve on the perfection of a career in which he has won more races (151), appeared in more finals (255), been the No. 1 qualifier more often (160 times) and won more racing rounds (1351) than anyone else in history.

Crew chief David Grubnic and assistant crew chief Mac Savage will continue to tune 2017 Top Fuel world champion Brittany Force’s Monster Energy / Flav-R-Pac dragster. Like her father, Force’s dragster will feature two primary sponsors throughout the 2020 season with Monster Energy owning 12 races and Flav-R-Pac owning 10. Force wrapped up 2019 third in the points standings after chasing down a second championship until the final race of the season. In the process, Force captured wins at the SpringNationals in Houston (her second consecutive at the event) and the Countdown to the Championship race in Las Vegas while securing a career best eight No. 1 qualifiers and also set both ends of the Top Fuel national records, 3.623-seconds at the Reading event and 338.17 mph at the Las Vegas event.

Auto Club Road to the Future Award winner Austin Prock will enter his second NHRA season in the driver’s seat of his Montana Brand / Rocky Mountain Twist dragster with crew chief Mike Green, a 2019 mid-season hire, and assistant crew-chief Joe Barlam, the newest member of the John Force Racing tuning roster. Prock earned his first career victory with Green at the Northwest Nationals in 2019, joining the list of only 10 previous rookies to win in their first season. Prock also became only the 13th rookie to qualify for the Countdown to the Championship and finished the season eighth in points.

“We ended the 2019 season in a good spot, anytime your team gets a championship, as a team owner, it’s always good. Prock got his first win, Brittany and I were in the fight and then Robert with Auto Club was just incredible,” said John Force Racing CEO and owner John Force. “We are going to start 2020 with momentum. The changes we’ve made, they’ll only improve on what we have. It’s not going to be easy, but the teams we have will be willing to put in the work to make great things happen. We’re going after race wins and championships, that’s what we’re always going after. We have the people, the partners and the parts to make it happen.”

John Force Racing will get the chance to hit the loud pedal for the first time since November at pre-season testing at The Strip at Las Vegas Motor Speedway, Jan. 30th-Feb. 1st. The 2020 NHRA Mello Yello Drag Racing season kicks-off with the 60th anniversary Lucas Oil NHRA Winternationals Feb. 7-9th at Auto Club Raceway at Pomona in Pomona, Calif.