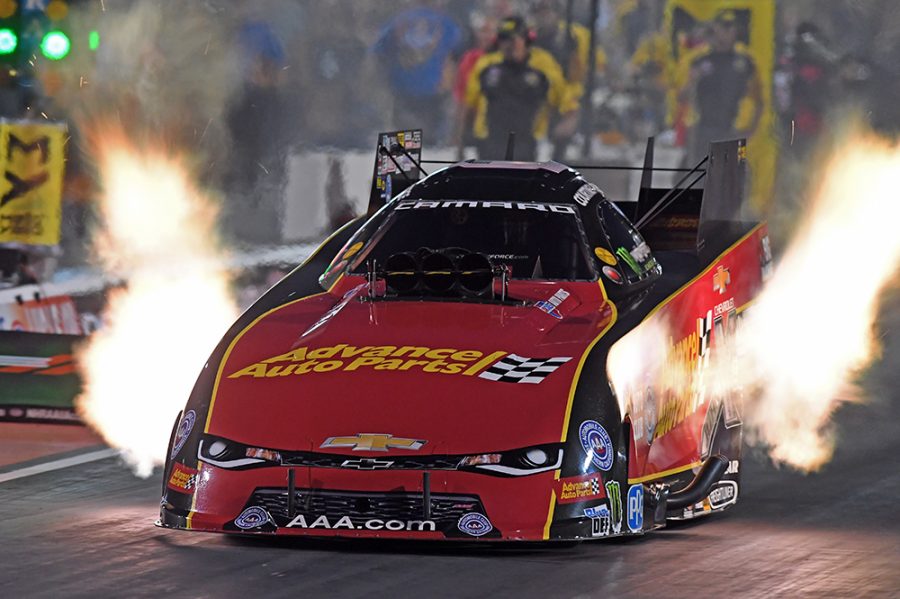 MORRISON, Colo. (July 20, 2018) — The Chevrolet Camaro Funny Cars of John Force Racing hold the top three spots after two qualifying sessions on Friday at the Dodge Mile-High Nationals. Courtney Force leads the trio with her Advance Auto Parts Chevrolet Camaro SS in the top spot. Robert Hight and the Auto Club of Southern California team are No. 2 and John Force is No. 3 with his PEAK Coolant and Motor Oil team. In Top Fuel, Brittany Force is currently qualified seventh with her Carquest Brakes Monster Energy dragster.

Courtney Force, who ran 3.966-seconds at 322.73 mph during the second qualifying session, is chasing her third consecutive No. 1 qualifier at Bandimere Speedway outside of Denver, Colo. Force was quickest both sessions improving on her 3.995-second pass at 281.60 mph from the first session. She was the only Funny Car to run in the three-second range during Q1.

“To come out here in Denver and kick off the Western Swing with two solid runs is a good feeling,” said Force in the pressroom following qualifying. “To be honest we didn’t get a full pull in Q1. It started spinning the tires down there and I got out of it. It still managed to run a 3.99 which I think was very impressive. I was looking forward to go into Q2 because I knew we could improve on that time. We got that 3.96 and had a little explosion at the top end. It happened right in the lights and we were still able to get the ET we wanted. It feels good to pick up some more bonus points and have the No. 1 spot.”

The consistency earns Force, who owns both ends of the track record, six valuable bonus points, adding to her points lead that was 155 coming into the Mile-High Nationals. Seeing all three John Force Racing Chevrolets running well gives Force a lot of confidence in the entire four car team as they kick-off the famed Western Swing, a string of three consecutive races in Denver, Sonoma, Calif. and Seattle.

“I loved hearing that JFR was 1-2-3 right now for our Chevrolets. That is a great start for the Western Swing. I did a number of interviews today talking about how important the Western Swing is and this is race one of that series. Things are a lot different when you come to a track like this with the thin air. You have to make the adjustments and my team led by Dan Hood and Brian Corradi did a great job today.”

Robert Hight, the defending Mile-High Nationals champion, made major improvements from the first qualifying session where he and his Auto Club of Southern California team shut off early to run 4.482-seconds at 197.25 mph. Hight’s 3.986-second pass at 321.58 mph jumped him up from ninth to No. 2.

“We made a really good run in the second qualifying session. (Crew chief) Jimmy (Prock) has always had a really good handle on a tune up for the mountain air. We will get two more shot tomorrow and I know a lot of cars will be trying to step up. We will have to keep focused and make good calls. This was a good start to defending our title here in Bandimere and I am looking forward to getting back here tomorrow.”

In his “American Made” themed PEAK Coolant and Motor Oil Chevrolet Camaro SS Funny Car, John Force laid down a 4.007-second pass at 321.58 mph for the position. Force, like daughter Courtney, maintained his qualifying position from the first session but improved on his 4.065-second pass at 315.42 mph.

“We made a good run in the first session and wanted to step up with the cooler conditions,” said Force. “Jon Schaffer and Ronnie Thompson made some good calls and we were able to hold onto that No. 3 spot.”

Force is looking to extend his streak of qualifying inside the top three at Bandimere to five consecutive years. Force has two consecutive No. 1s in 2014 and 2015 and two consecutive No. 2s in 2016 and 2017, three out of the four years he raced his way to the finals earning the victory in 2016.

“We have done well on the mountain over the years,” added Force. “We have won a lot of races and I ran the first 300 mph here even before the dragsters. It is only the first day of qualifying but everyone will get another session tomorrow night with the same conditions. It will even be later for the Funny Cars. I feel good that we keep our heads together and we work together. That is our key. Chevrolet expects this kind of performance from us. PEAK expects this from me because I am the 16-time champion. I picked up a couple bonus points and that is all good.”

Running new colors this weekend, Brittany Force currently has her Carquest Brakes Monster Energy dragster qualified in the No. 7 position with a 3.964-second pass at 254.42 mph from the second session. Force improved from the No. 10 spot she held after smoking the tires early during her first pass of the day, crossing the line to a 4.839-second pass at 154. 92 mph.

“When you are racing on the mountain your racecar sounds different. There is more of a challenge for this Carquest Brakes Monster Energy team,” Force said. “For my crew chiefs Brian Husen and Alan Johnson this is the only race track on the circuit where we are racing at this high altitude. They have to adjust quite a bit. We have to make a lot of changes for this race and then reset when we go to Sonoma next weekend. It is a lot of work but I have a lot of confidence in this team.”

With two more qualifying passes on Saturday predicted to have similar conditions as Friday, the challenge of qualifying continues into race day.

“We run both days at night and that makes race day a real challenge because the conditions are so different,” Force explained. “Everyone is in the same boat. It is the same challenge for everyone. I think whoever wins this race it shows that they have a pretty strong team. We will figure it out and I really want to win a race here.”

Two more qualifying sessions for the Dodge Mile-High NHRA Nationals are slated for Saturday at 6 and 8 p.m. before eliminations begin Sunday at 11 a.m. with live finals coverage on FOX Broadcasting Network.