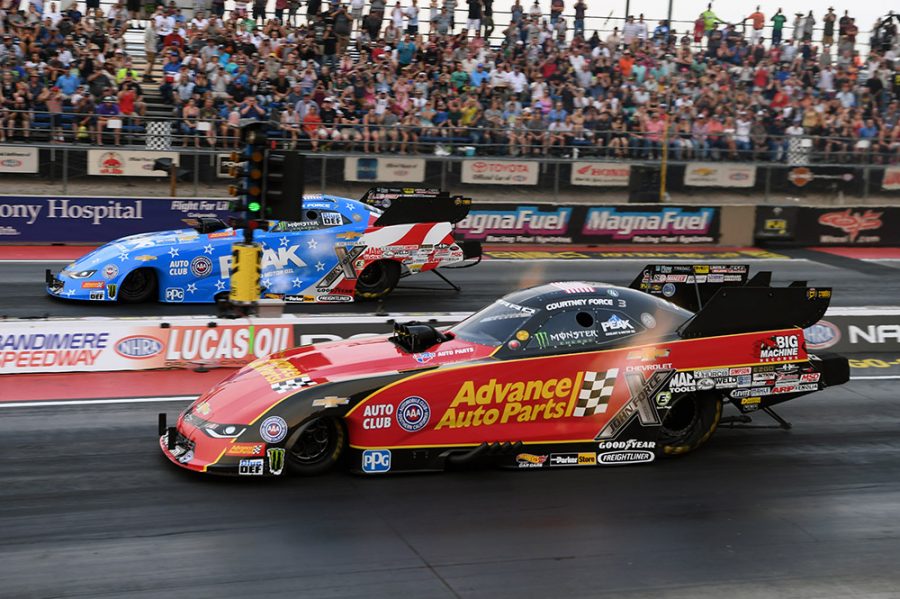 MORRISON, Colo. (July 21, 2018) — For the third consecutive year, Courtney Force powered her Advance Auto Parts Chevrolet Camaro SS Funny Car to the No. 1 position at the Dodge Mile-High NHRA Nationals held at Bandimere Speedway just outside of Denver. Her Funny Car teammates followed close behind with Robert Hight and the Auto Club Camaro taking the No. 3 spot and John Force locking up the No. 5 position with his PEAK Coolant and Motor Oil Camaro. In Top Fuel, Brittany Force improved to the No. 2 position in her Carquest Brakes Monster Energy dragster.

Off the efforts of her 3.949-second pass at 309.91 mph from the final qualifying session, Courtney Force secured her ninth No. 1 qualifier of the season, 26th of her career, third consecutive at Bandimere Speedway and the 300th Funny Car No. 1 for John Force Racing.

“That run felt awesome and we obviously had nothing to lose,” said Force who is now third in No. 1 starts at John Force Racing behind only Hight and John Force. “It was a solid pass and we picked up a fair amount of bonus points throughout qualifying. My car actually shut off early that last run and that is why my speed was down. I think this Advance Auto Parts Chevy Camaro had a lot more in it. The conditions will be completely different going into race day but we feel like we have a pretty good hot rod and all of our Chevrolets are running strong.”

Courtney Force was quickest three out of the four qualifying sessions. In Q1 she ran 3.995 seconds which was bettered by her 3.966-second run under the lights. In Q3, her Advance Auto Parts machine had a hole out early but her Q4 run made up for it with the 3.949 second pass. She picked up nine valuable bonus points heading into race day.

“To be honest we struggled a lot at the last race (in Epping, N.H.). For me it just feels good that we have a pretty good race car and a handle on things. We wanted to get back to being consistent and we did that with three of the four runs picking up bonus points. That was huge. I feel confident going into race day but obviously the conditions will be completely different and we will have to adjust.”

Force will be racing Terry Haddock in the first round of eliminations as she begins the hunt for her first Mile-High championship. She has reached the finals two previous times — her rookie year in 2012 where she defeated veteran Tim Wilkerson, teammate Robert Hight and 2016 world champion Ron Capps before falling to Jack Beckman, and in 2016 where she defeated Jim Campbell, Tommy Johnson Jr. and Hight before losing to her father John Force, who is the only Funny Car driver to sweep the Western Swing. Courtney Force, who has four wins already this season and a 155 points lead coming into the weekend, likes the sound of a sweep of the famed three-race stretch.

“It would be huge to sweep the Western Swing. We are just looking to hold onto this points lead. I would love to do it but we are just keeping our focus on making consistent runs. I saw my dad do it when I was a kid and if I could do it that would be amazing. That is a dream streak. You have to make things happen here in Denver if you want a shot at it.”

Two-time and defending world champion Robert Hight opened the second day of qualifying with a solid 3.990-second pass at 310.77 mph and in the final session, Hight raced to a 3.988-second run at 320.81 mph, tying the tenth fastest Funny Car pass ever made at Bandimere Speedway. Hight will begin race day from the No. 3 position based on his Q2 pass of 3.986-seconds at 321.58 mph. Although Hight won the event last year from the No. 3 position having two days of night qualifying makes tomorrow’s race day all the more challenging.

“We just aren’t running as quick as (crew chief) Jimmy (Prock) would like us to be based on the track prep and what we have been through,” Hight said. “Everything we have done is out the window. We are going to race tomorrow in the middle of the day. It will be a whole new ballgame. We have had a lot of luck here. We have won here four times and I am looking to get that fifth win. We want to start off the Western Swing right.”

Hight, will face Jeff Diehl in the first elimination round, an opponent he is 10-1 against.

Sixteen-time Funny Car world champion and seven-time Mile-High Nationals winner John Force had the most consistent two days of qualifying for John Force Racing, improving each round to secure the No. 5 spot with his Q4 run of 3.993-seconds at 319.90 mph. Force ran 4.000 seconds at 321.96 mph to be second quickest of the session during the third session. It was an improvement from his Friday night pass of 4.007 seconds at 322.27 mph that had him sitting third at the end of the day. Force will race Matt Hagan to start eliminations on Sunday.

“We ended up fifth but we hurt it a little on that run. I am ready to race tomorrow,” Force said. “I have Hagan in the first round and we will have this hot rod ready to run. Jon Schaffer and Ronnie Thompson are working with all the crew chiefs. We are starting to get a race car for PEAK and Chevrolet and all our sponsors. I am getting the fire back and I am feeling good.”

In Top Fuel, reigning world champion Brittany Force jumped into the No. 2 spot after making her first full pass of the weekend. Force wasn’t able to make her third qualifying run because of a malfunction with her emergency shut off but her 3.808-second pass at 321.50 mph moved her from the ninth position and will have her facing Jim Maroney round one. Maroney is the fifth different driver Force has faced this year and her 40th different Top Fuel opponent.

“That was a killer run for us,” Force said. “We had to bounce back from Q3 when we pulled up and we could fire this race car. We figured out what the problem was as soon as we got back to the pits. It was the emergency shut off. It got pushed at some point whether it was me getting into the car or getting belted in at some point. That last pass we went straight down there and put an awesome number on the board. It put us No. 2 which is a huge jump. It will be anyone’s game tomorrow. We have been running night sessions and going into race day we will be in the heat. It will be a little different and it should be interesting. This Carquest Brakes Monster Energy team will be looking for the win.”