JOHN FORCE PUTS PEAK TEAM IN THE NO. 3 SPOT FRIDAY AT THE NHRA HEARTLAND NATIONALS 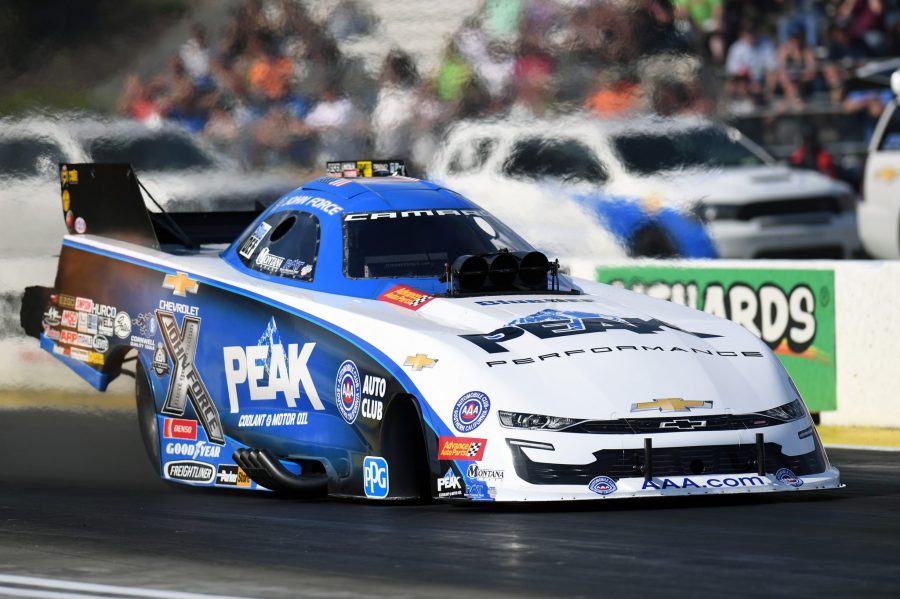 On the hunt for his 150th win, John Force started Friday’s qualifying with a 4.000-second pass at 317.49 mph in his PEAK Coolant and Motor Oil Chevy Camaro to end the session in the No. 1 spot. Like most of the Funny Car class, Force improved his performance in the night session, and put a 3.938-second pass at 323.27 mph up on the board good enough for the provisional No. 3 qualifying position.

“We’re all qualified so that’s good. I’m third in there and there’s a whole bunch more in this car. We’re starting to find that consistency that we’ve been looking for,” Force said. “My crew chiefs, Brian Corradi and Danny Hood, they’re doing good. My team is doing good and I’ll keep learning and get used to the changes we’ve made to this PEAK Funny Car.”

Prock and the Montana Brand / Rocky Mountain Twist team opened the Heartland Nationals with a 4.206-second pass at 217.46 mph after losing traction and having to shut off early down track with cylinders out. Prock and the Mike Green and Ronnie Thompson tuned dragster came out in the second qualifying session and laid down an impressive 3.783-second pass at 315.42 mph that had him in the No. 1 spot until the father-son duo of Billy Torrence and world champion Steve Torrence topped the category.

“We had a rough start to the day but my guys, they rebounded. We had a little bit of trouble during our service, a few things went wrong and then we had a miscommunication on our first run which slowed us down and we ended up putting some cylinders out, but they kept their heads down and got the race car right,” Prock said. “Mike Green and Ronnie Thompson, they worked their magic on it and made a really nice pass. It dropped a couple cylinders down track which slowed our speed down and E.T. a little bit so we could have run a bit better but it was a hell of a job by my guys. You know, we don’t have very many runs together and to come out here and be sitting in the third qualifying position after the first night of qualifying here, I’m really impressed. I hope we can keep working at it and keep improving, and give those Torrence boys a run for their money.”

Brittany Force and her Advance Auto Parts dragster had two solid passes during day one of qualifying in Topeka. Their afternoon started with a 3.922-second pass at 313 mph to put them in the seventh spot entering the night session. Force improved to 3.783-seconds at 315.42 mph to wind up in the No. 9 spot.

“We’re still trying to work some things out on this Advance Auto Parts car,” said Force, the 2017 Top Fuel world champion. “We moved down to No. 9 but we have a full day tomorrow and we’re hoping for two good runs to move us up the ladder before going into race day.”

Robert Hight and the Automobile Club of Southern California Chevy Camaro SS Funny Car team lost traction and shut off early in the first session of qualifying to run a 7.014-second pass at 93.03 mph. In his second pass of the day Hight made a 4.288-second pass at 216.55 mph after smoking the tires. The run put him in the No. 13 spot going into the final day of qualifying.

“Today was a little bit of a rough day for this Auto Club team. We didn’t run like we wanted to and we obviously wanted to get into the top of the field going into tomorrow, so we’ll really have to get after it,” Hight said. “It was hot out there and we had the same conditions last weekend but I’m confident my guys, and Jimmy Prock and Chris Cunningham will get this thing figured out. We’re looking to go rounds Sunday, that’s all that matters.”

Qualifying at the Menards NHRA Heartland Nationals presented by Minties continues Saturday with sessions at 12:30 and 3:45 p.m. Eliminations are slated to begin Sunday at 11 a.m. at Heartland Park Topeka.