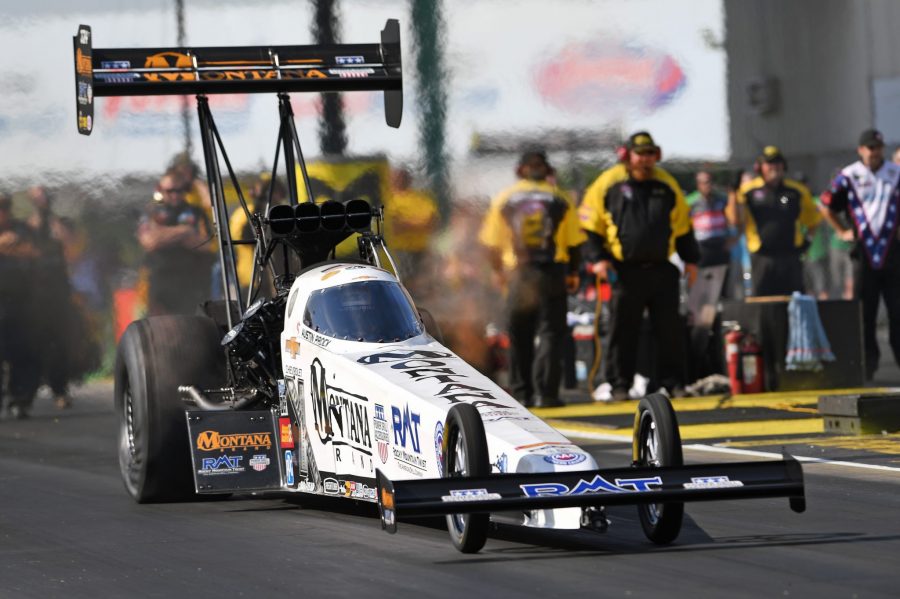 TOPEKA, Kan. (June 8, 2019) — Rookie of the Year candidate, Austin Prock and the Montana Brand / Rocky Mountain Twist Top Fuel dragster team locked in the No. 3 qualifier spot Saturday at the Menards NHRA Heartland Nationals presented by Minties at Heartland Motorsports Park. Team owner John Force is also the No. 3 qualifier in Funny Car with his PEAK Coolant and Motor Oil team. Both Robert Hight and his Auto Club of Southern California Chevy Camaro, and Brittany Force and the Advance Auto Parts dragster team are sitting No. 9.

First year driver, Austin Prock and the Montana Brand / Rocky Mountain Twist team secured their best qualifying effort of the 2019 NHRA Mello Yello Drag Racing Series season off the efforts of a solid 3.783-second pass at 315.42 mph on Friday night. The pass held up through the final two qualifying sessions on Saturday where Prock, and a majority of the category, struggled.

For his first pass of the day, Prock smoked the tires to run a 6.328-second pass at 105.50 mph. Similarly, in the last qualifying round, the third-generation driver started to lose traction and had to shut off early making a 5.500-second pass at 126.89 mph. With the No. 3 spot, Prock will go up against Cameron Ferre in the first round of eliminations.

“All in all, we got our best qualifying effort out of the season by three positions. Ended up being third and we’ve got Cameron Ferre tomorrow,” said Prock who’s previous best race day start had been sixth. “Hopefully we can get this Montana Brand / Rocky Mountain Twist dragster going down the race track tomorrow and go some rounds. We had a tough day today but we’re going to leave all of this behind us and go get them tomorrow.”

John Force and the PEAK Coolant and Motor Oil Chevy Camaro Funny Car team will start race day at Heartland Motorsports Park in the No. 3 qualifying spot after a 3.938-second pass at 323.27 mph from Friday night. The racing legend kept things consistent to start day two of qualifying with a 3.984-second pass at 319.45 mph, picking up three bonus points for being the quickest in the pack. In the final round of qualifying, Force powered his hot rod to 4.022-seconds at 314.02 mph and although it was his slowest pass of the weekend, he earned two additional bonus points as the second quickest in the session. The sixteen-time world champion will pair up against Dale Creasy Jr. in round one.

“We made some good passes today and we’re No. 3 going into tomorrow. My PEAK team is working hard, all of our teams are working hard. My race car is starting to show it’s consistency and it’s running good,” Force said. “Robert Hight and Auto Club moved up, the Prock kid qualified No. 3 too and Brittany and Advance are in. We’re all ready to go rounds tomorrow but I want to get PEAK in that winner’s circle for win 150.”

Two-time Funny Car world champion, Robert Hight smoked the tires in his Auto Club Chevy Camaro in the third qualifying session to run a 7.430-second pass at 85.07 mph. Heading into the final session sitting in the No. 13 spot, Hight laid down his best pass of the weekend with a 4.015-second pass at 318.32 mph to move up into the No. 9 qualifying position. The run would also earn him three bonus points after being the quickest of the Funny Car class. He’ll go head-to-head with Shawn Langdon in the first round of eliminations.

“Once everything went right, we made a good run. That last pass was the best run of the session so that gives you confidence but we had nothing but problems in all of the first three runs,” Hight said. “These guys though, they just keep working and digging, and you know, rise to the top. We’ll have new conditions tomorrow which play right into our hands and I can’t wait.”

Brittany Force and the Advance Auto Parts Top Fuel team opened the second day of qualifying with a 4.316-second pass at 191.35 mph after hazing the tires and shutting off early. Force improved in the final session running her dragster to 3.925-seconds at 304.05 mph and would grab one bonus point for being the third quickest of the group. Force will start race day from the No. 9 spot with her 3.877-second pass from the Friday night session and face racing veteran, Clay Millican.

“In Q4 we ran a 3.92, we’re happy with that run. It was a hot race track and we got this Advance Auto Parts dragster down there. We’re looking forward to race day tomorrow,” Force said. “We face Clay Millican and we’re hoping to turn things around from last weekend in Chicago. We want to go rounds and get his Advance Auto Parts team in the winner’s circle.”