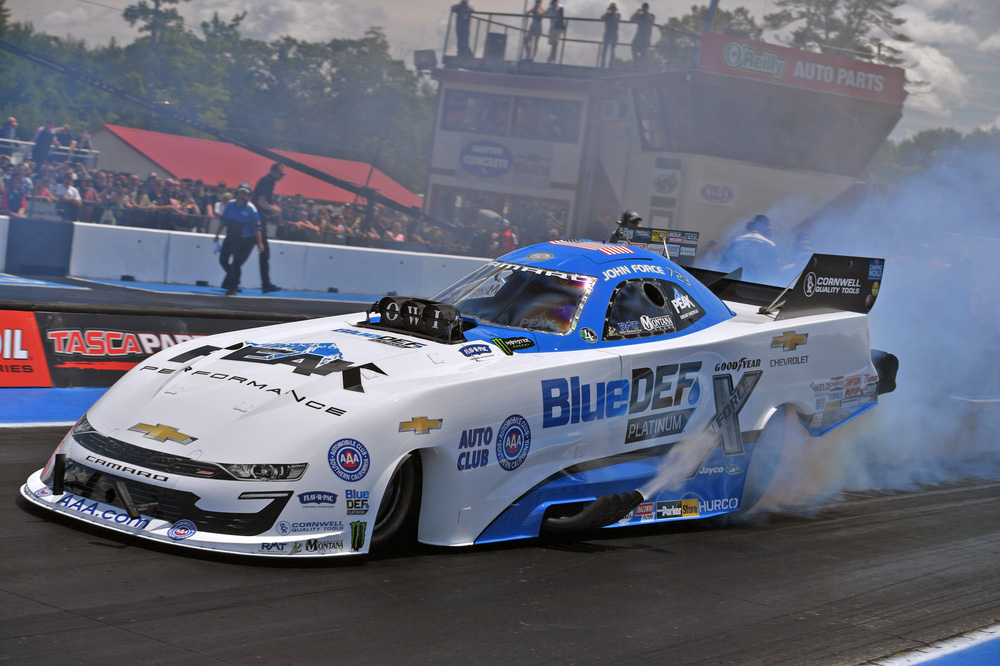 EPPING, N.H. (June 12, 2021) – There was improvement all around for the John Force Racing teams on Saturday at New England Dragway. Each ended their qualifying efforts at the TascaParts.com NHRA New England Nationals on a high note. John Force and the PEAK / BlueDEF PLATINUM Chevrolet Camaro SS team made two solid passes to land in the No. 3 spot heading into race day. Brittany Force and the Flav-R-Pac Top Fuel team ended qualifying in the No. 7 spot and Robert Hight and the AAA New England Funny Car are starting from No. 10.

John Force and the PEAK / BlueDEF PLATINUM Chevy Camaro SS team had their quickest run of the weekend in the second qualifying session when they laid down a 3.929-second pass at 326.95 mph to temporarily move into the No. 2 spot. The BlueDEF team had another solid run at 3.979-seconds and 315.78. mph in the third session but were bumped one spot to No. 3. They’ll run against Cory Lee in the first round of eliminations.

“Pretty good day for this PEAK team. Danny Hood, Tim Fabrisi and the whole team, they worked hard, got this car going,” Force said. “We’re looking good for tomorrow, all of us are, Robert Hight with AAA is getting going and Brittany with Flav-R-Pac and Monster Energy, they’re looking pretty good too. So, we’ll get out there, go some rounds and get things done for our sponsors and these fans.”

The Flav-R-Pac dragster of Brittany Force started Saturday with some trouble staying in the groove. The 2017 Top Fuel world champion had to shut off early for a 9.948-second pass. The Flav-R-Pac team would be moved down to the No. 10 spot heading into their final qualifying effort. Force improved in the final pass laying down a solid 3.798-second pass at 319.82 mph despite having a cylinder out to move them into No. 7.

“It was Q3 and our Flav-R-Pac team made a solid pass at 3.79 putting us No.7 in the field. We have our work cut out for us tomorrow running Antron Brown in round one of eliminations but I’m confident this team will continue to get after tomorrow,” Force said. “We’re looking for a win here at New England Dragway.”

After barely getting off the line on Friday night, Robert Hight and the AAA New England Camaro made it to the 600-foot mark before having to shut off early for a 4.464-second pass. The improvement jumped them into the No. 10 spot heading into the final qualifying session. Hight and the AAA team improved their performance on Saturday evening running a 3.992-second pass at 325.78 mph but would remain No. 10 to start race day.

“We figured some things out in that last run and we’re looking good going into race day,” said Hight who will race against Alexis DeJoria. “It was a long day but productive. This AAA team still has some work to do tomorrow, but coming off that win in Houston, we know we have what it takes to get the job done.”

Eliminations at the TascaParts.com NHRA New England Nationals are set to begin on Sunday at 11 a.m. ET. To catch all the qualifying action from this weekend, tune into FOX Sport 1 (FS1) at noon ET. Eliminations’ television coverage will start at 1:30 p.m. on FOX Broadcasting Network (FOX).