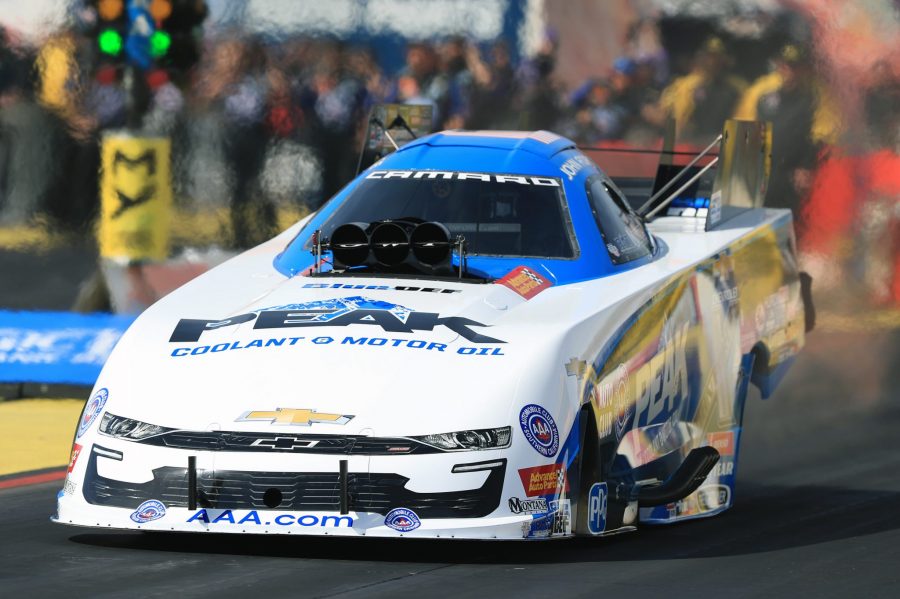 GAINESVILLE, Fla. (March 13, 2019) — Sixteen-time Funny Car world champion, John Force, is headed to the premier 50th Amalie Motor Oil NHRA Gatornationals, the first east coast race of the NHRA Mello Yello Drag Racing season, hoping to make it his most memorable Gatornationals yet. Force and his PEAK Coolant and Motor Oil team will be ready to put on a show in front of the legends he’s looked up to in the sport.

The NHRA has big plans for the 50th anniversary of the Gatornationals throughout the weekend including special meet-and-greets and autograph sessions with more than 20 NHRA legends. The highlight of the weekend however will be on the much anticipated “Unfinished Business” race, when eight legends go head-to-head in competition.

The iconic event has been memorable for the winningest driver in NHRA history. Force has 63 round wins, 13 final round appearances and eight career victories at the Gatornationals with his most recent in 2017, making him the only driver in the nitro class to do so at Gainesville Raceway. He’s defeated 40 different opponents including eight series champions, one of which is teammate Robert Hight, and has held the No. 1 qualifier position seven times.

At the 2018 Gatornationals, Force blew the body off his Funny Car during Friday’s qualifying session before reaching the finish line. It would mark his third consecutive crash of the season but wouldn’t be something the veteran racer would hang his head about. As he heads into this year’s iconic 50th anniversary event, he’ll be chasing his 150th win and is hoping to pick up the victory in front of the racing legends that set the stage for the sport.

“Gainesville has been very good to me over the years. I’ve won eight races there, I’ve crashed on their premises, been on fire, been in the burn enter but the crowds, the locals and all those fans that come out of the north to come to the warm weather is just unbelievable. It’s exciting to go back again especially knowing that the legends will be there: Joe Amato, Kenny Bernstein, Don Garlits, Darrell Gwynn, Ed McCulloch, Shirley Muldowney, Don Prudhomme, and so many more. Those are my heroes,” Force said. “To be able to go back and be able to race in front of them, it’s going to be exciting and I really want to do well. I’m going after 150 in my career wins and I hope I can do it in front of those who really matter to me, the fans, the sponsors, and those legends. Can’t wait to be at International Drag Racing Hall of Fame Induction that Garlits puts on, that really starts off the weekend.”

With a semifinal finish at the season opening Winternationals in Pomona, Calif. and a second-round exit at the Arizona Nationals, both thanks to teammate Robert Hight, Force has had a solid start to the 2019 season and is looking to keep the momentum going. Under the watchful eye of crew chiefs Brian Corradi and Dan Hood, Force and his PEAK Coolant and Motor Oil Chevy Camaro team have made changes focused on getting the car faster down the track, something they’re looking to continue at Gainesville Raceway.

“My car is coming around, it’s fast, it’s showing the numbers. It was a good car for my daughter Courtney last year, she won four races, 11 No. 1 qualifiers. Her team really loved her but I’m finally getting to know them all and it’s going well,” Force said. “I’m really looking forward to going to the Gatornationals with PEAK Coolant and Motor Oil and rockin’ and rollin’.”