JOHN FORCE ‘BACK IN THE HUNT’ AS RACING GETS UNDERWAY IN 65TH ANNUAL CHEVROLET PERFORMANCE U.S. NATIONALS 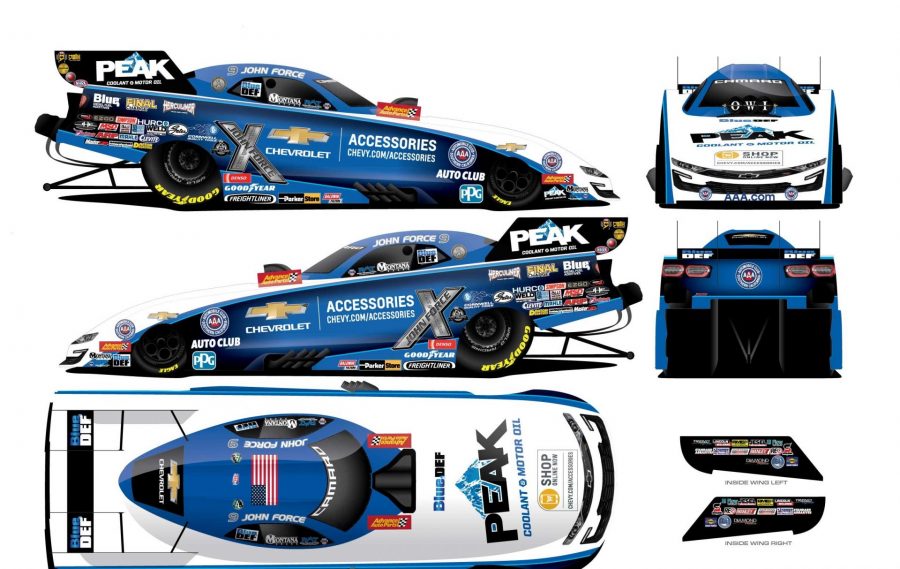 BROWNSBURG, Ind. (Aug. 28, 2019) — In a season in which he already has celebrated his 70th birthday and his 150th NHRA tour victory, the 16-time series champion isn’t discounting his chances of driving a special edition Chevrolet Performance version of the PEAK Coolant and Motor Oil Chevy Camaro SS into the Funny Car winner’s circle at the 65th annual Chevrolet Performance U.S. Nationals.

Force returns this year to Lucas Oil Raceway at Indianapolis with a bit of a swagger, the result of three final round appearances and his current third place standing behind teammate Robert Hight, driver of the Auto Club Chevy Camaro, and Tommy Johnson Jr., the man he beat to win his last Indy title.

“It would be exciting to (get another) win,” he said, “(and) to get the Chevy specialty theme in the winners’ circle at the Chevy race, but I’d love to win it with any of my teams – Robert with Auto Club, my daughter Brittany with Advance Auto Parts or Austin Prock with Montana Brand / Rocky Mountain Twist.

“Indy is our racing headquarters,” he continued. “It’s where our shops are and our employees can come to the race and see what they’ve created. They get to come out and take some real pride in what they do for John Force Racing. That makes it even more special.”

After a first-round malfunction two weeks ago at Brainerd, Minn., that allowed Johnson Jr. to move around him in points, Force is anxious to get back into the fight. He’ll start Friday just one round out of second place. It’s the highest position he has occupied going into Indy since 2014.

“Robert has a huge lead and I don’t think anybody can catch him,” Force said, “but there’s points-and-a-half at Indy, so I’m not conceding anything. I’ve won it a few times. (Crew chiefs) Brian Corradi and Danny Hood and (car chief) Tim Fabrisi have given me a good hot rod so we’ll see if we can win it again.”

Already assured of his 35th consecutive Top 10 finish, an NHRA record, Force now is focused on much more.

“I may not be as young as these kids and I may not be a hot shot on the ‘Tree anymore,” he said after winning at Seattle, “but if you give me a good race car, I can still win and right now I’ve got a race car as good as anyone’s.

“I’ve finally got that monkey off my back (a reference to the pressure of winning his 150th title) and I’m ready for the Countdown,” he said. “I’m in the hunt and that’s all I ever wanted to be.”

This will be the 40th Indy appearance for the racing icon who will be seeking his 50th round win in the U.S. Nationals (he comes in at 49-31 for his career). Since he last won the race he calls “the granddaddy,” four teammates (Hight, Ashley Force Hood, Mike Neff and Gary Densham) have hoisted the Funny Car trophy.