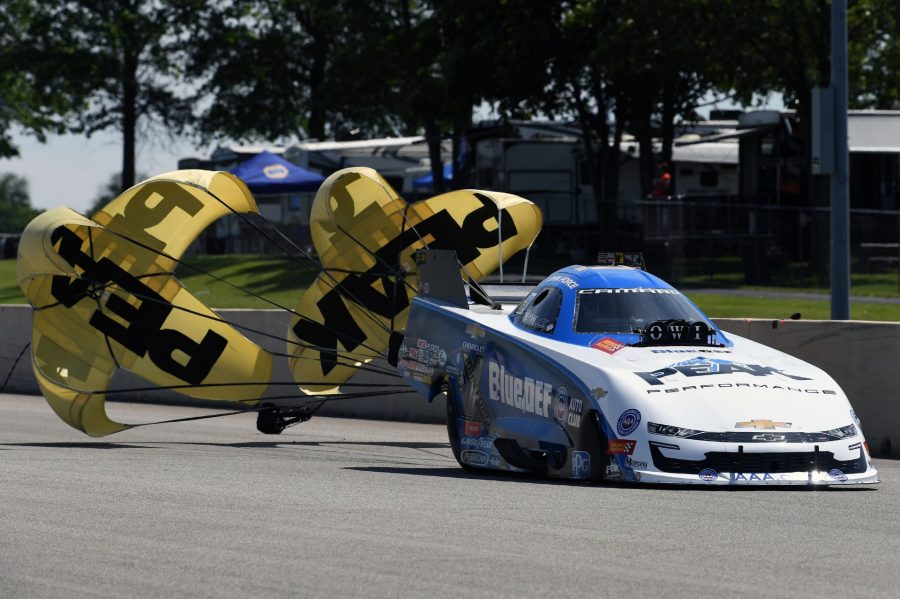 ST. LOUIS (Sept. 25, 2019) — John Force and the PEAK Coolant and Motor Oil / BlueDEF Chevrolet Camaro SS team are gearing up for this weekend’s AAA Insurance NHRA Midwest Nationals, the second of six events in NHRA’s Countdown to the Championship, ready to continue their consistent performance as they compete for a mindboggling 17th Funny Car world championship for the iconic driver.

Since the beginning of the 2019 NHRA Mello Yello season, Force and his PEAK Chevy Camaro team have never trailed outside the top six in the points standings and after their recent runner-up finish at the NHRA Nationals in Reading, Pa., are trailing only 19 points behind first as they head to the second event in the Countdown. With having already accomplished two of his most sought-after checklist items, taking home his 150th career Wally and winning the U.S. Nationals, the 16-time Funny Car world champion has a new venture and that’s contending for his 17th Funny Car title.

Two weeks ago, during qualifying at Maple Grove Raceway, Force was sitting at the bottom of the Funny Car class before jumping nine spots when he ran his Brian Corradi and Danny Hood tuned hot rod to 3.889-seconds at 334.40 mph. Throughout race day Force kept the same momentum running a .93, .94 and .92 before falling short of the winner’s circle to Jack Beckman’s holeshot win in the finals for his second runner-up finish of the season.

“We had a good race day in Reading. Went to the final but Beckman, with the .028 light, I can’t beat that on my best day. My PEAK Chevy is consistent though. Brian Corradi and Danny Hood, Tim Fabrisi and the PEAK team have given me a great race car,” said Force. “That was the first race in the Countdown and we’ll just keep doing what we’ve been doing and I’ll do my job and get ‘Old Blue’ down the track. We’ll see what we can do in St. Louis this weekend.”

Force, who will be making his 781st race day start at this year’s AAA Insurance Midwest Nationals, is entering the event with two wins in four final rounds, eight semifinal appearances and three No. 1 qualifiers that included a monumental No. 1 at the Spring Nationals where he shared the top spot with daughter Brittany Force making them the first parent-child duo to sweep the nitro categories in qualifying. Throughout his time racing at the newly named World Wide Technology Raceway, Force has been to the finals six times with three wins in 1999, 2002 and 2014. He’s also landed the top spot two times, once in 2010 and again in 2014.

“Well, we’re all headed to St. Louis and I’m ready to get there. We’re all in the Countdown. Robert and I are back-to-back in the points, Brittany is No. 2 and the Prock kid is seventh. The championship is coming fast and it would be nice to win another one,” said Force. “I’ve done pretty good at this track in the past so we’ll see what we can do to get another win and keep up in the points.”