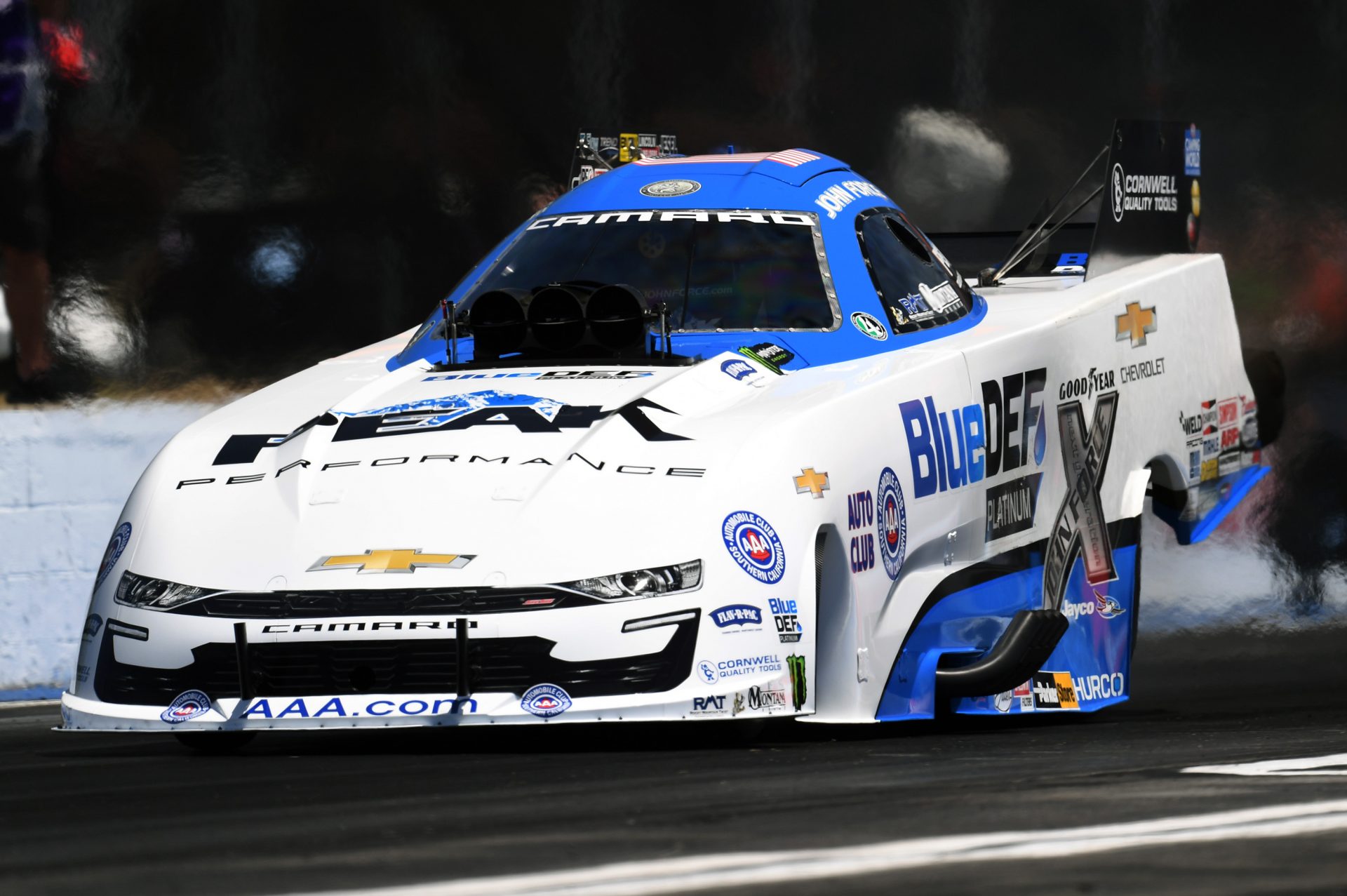 COMMERCE, Ga. (May 02, 2021) – John Force and his PEAK / BlueDEF PLATINUM Chevrolet Camaro SS Funny Car made their 257th final round appearance at the Lucas Oil NHRA Southern Nationals, the final NHRA Camping World Series event to be held at Atlanta Dragway. Brittany Force and her Monster Energy dragster made their way to the semifinals and Robert Hight and the Automobile Club of Southern California Chevy Camaro had a first round exit on Sunday.

The win would match Force against J.R. Todd in the semifinals. The PEAK / BlueDEF PLATINUM Camaro continued its dominance racing to a 3.984-second pass at 325.22 mph to defeat Todd’s 4.038 at 318.54 and send Force to the final at Atlanta Dragway for the first time since his daughter Ashley Force-Hood defeated him for her first win, and the first Funny Car win for a female, in 2008.

In his 15th final round appearance at Atlanta Dragway, Force would face Bob Tasca III, the 13th different competitor he’s faced in a final round at the venue. The day would come to an end for Force and the PEAK / BlueDEF Platinum Chevy crew with a 4.015-second pass at 321.81 mph that was nearly enough against Tasca’s 4.004 at 326.48.

“Mike Neff and Jon Schaffer have had that car running on a string since Vegas and they got the win, but my guys, this PEAK / BlueDEF team, they performed good,” said Force who moves up to third in points. “There’s a lot of work for me to get back in the game, keep improving on that Christmas Tree. But I was really proud of my guys here and we moved up, too, in the points. So, we’ll see how it goes at the next one in Charlotte.”

After qualifying No. 5, Brittany Force and the Monster Energy team laced together three solid runs for a semifinal finish.

In the semifinals, Force would line up with eventual event winner and familiar foe Antron Brown, she’s faced him 23 times in her career. It would be a clean and close race with Force handling her Monster Energy dragster to a 3.785-second pass at 323.89 mph that was narrowly bettered by Brown’s 3.786 at 320.51.

“Good weekend for this Monster Energy/Flav-R-Pac team. Final race in Atlanta. We wanted to get the job done but we went some rounds with a semifinal round finish,” said Force who moves to fifth in points. “I know we moved up in points, so we’re making progress. We’re getting there. I’ve been out of the seat for a year, so we’re already off to a good start.”

Robert Hight and the Auto Club team had one of their rare tough weekends out at Atlanta Dragway. After battling with the track and qualifying 12th, the Auto Club Chevy had more tire smoke in their first-round loss. They would cross the finish line at 5.341-seconds and 135.18 mph falling short of reigning champion Matt Hagan’s 3.991 at 307.65.

“It just wasn’t our weekend. There were a lot of variables out there, weather, track condition, but we had the same chances as everyone else,” said Hight who is now sixth in points. “This Auto Club team, we’ll be ready for the next one. Jimmy Prock and Chris Cunningham, they know what they’re doing, and we’ll get after it in Charlotte.”

The John Force Racing trio will continue on the NHRA Camping World Drag Racing Series circuit as they head to zMAX Dragway in Charlotte N.C. for the NGK NTK NHRA Four-Wide Nationals May 14-16. The very next weekend they will head to Houston Raceway Park for the Mopar Express Lane NHRA SpringNationals May 21-23.