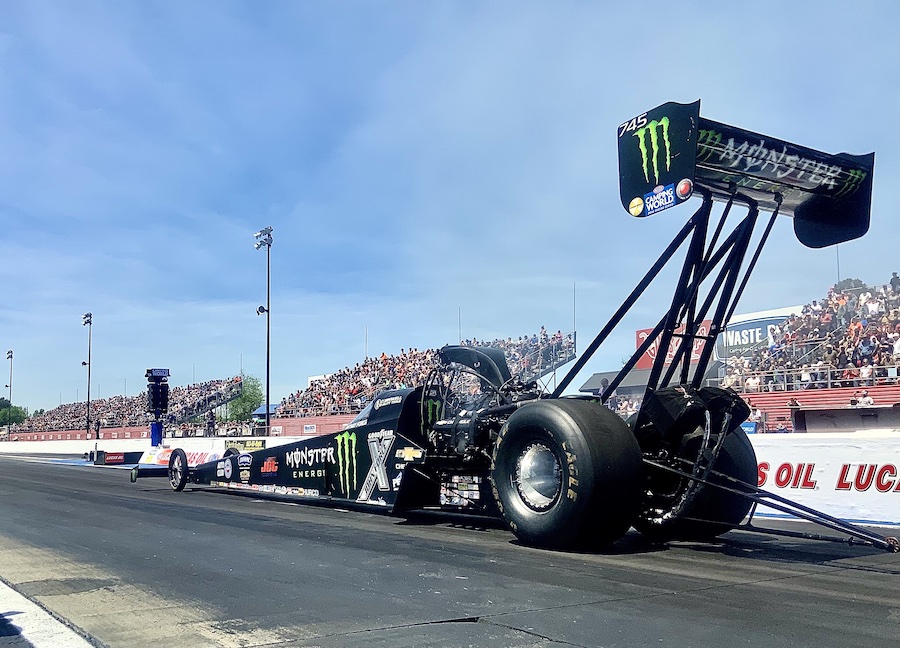 COMMERCE, Ga. (May 01, 2021) – During qualifying for the final NHRA Camping World Drag Racing Series event at Atlanta Dragway, the Lucas Oil NHRA Southern Nationals, Brittany Force and the Monster Energy team were efficient with their two runs to earn the No. 5 spot heading into race day. John Force and the PEAK / BlueDEF Chevrolet Camaro team ended the day No. 11 and Robert Hight and the Automobile Club of Southern California Chevy Camaro are No. 12.

In the first qualifying session, Brittany Force and her Monster Energy team smoked the tires to run only 4.657-seconds at 163.39 mph. They landed in the No. 5 spot after all but one dragster failed to make a full pass. In their second qualifying try, Force and her Monster team improved drastically to run a solid 3.856-second pass at 314.90 mph. While the performance was better, the rest of the Top Fuel field improved as well to keep Force in the No. 5 spot.

“Only two runs and in No. 5, that’s something we’re happy about,” said Force who will race Doug Foley in the first round of eliminations, her 52nd different opponent. “This Monster Energy team, we had a little bit of a different approach going in to today. It’s tough going into race day with just those two qualifying chances. But we are in the top five and we are happy with that. It’s the last race here in Atlanta so we need to get the job done.”

The tire smoke trend continued for 16-time world champion John Force and his PEAK / BlueDEF Chevy. The 4.995-second run at 159.53 mph would put them in the seventh spot. Force ran into trouble early in the second qualifying run. The PEAK / BlueDEF Chevy lost traction almost immediately coasting to 9.885-seconds at 74.51 mph and end the day No. 11 of their first qualifying run.

“We had the same opportunity that everyone else got. I don’t like two runs but that’s what the rules are here in Atlanta,” said Force who will face Cruz Pedregon for the 110th time in his career to start eliminations. “Everyone is talking about this being the last race, and asking how I feel about it but I’m taking all the memories with me over the last 40 years, the fans, the people, the wins, the sponsors. My kids were here with me when they were little, and they were here with me when they were grown up. Nope I don’t have any complaints. Atlanta Dragway, this track here in Commerce, gave its heart to us and we’ll never forget that.”

Robert Hight and the Auto Club Chevy were met with tire smoke during their first go at Atlanta Dragway. The three-time championship team crossed the finish line with a 5.088-second pass at 154.53 for the No. 8 position. The second round of qualifying was more of the same for Hight and the Auto Club boys. Hight drove into smoke to run 5.024-seconds at 152.73 mph. It’ll be a No. 12 start for the three-time Southern Nationals winner.

“We’re looking forward to tomorrow, looking forward to race day. Qualifying may not have gone the way we wanted or planned but it’s all information we can use for tomorrow,” said Hight who will face reigning world champion Matt Hagan. “When you have crew chiefs like Jimmy Prock and Chris Cunningham, you’re never worried going into race day. We’ll get out there, go some rounds and hopefully take this Auto Club Chevy to the winner’s circle.”

Eliminations at the final running of the Lucas Oil NHRA Southern Nationals at Atlanta Dragway begins at 11 a.m. Television coverage is on FOX Sports 1 (FS1) and begins Sunday with qualifying at 10:30 a.m. ET and eliminations coverage at 11:30 p.m. ET.