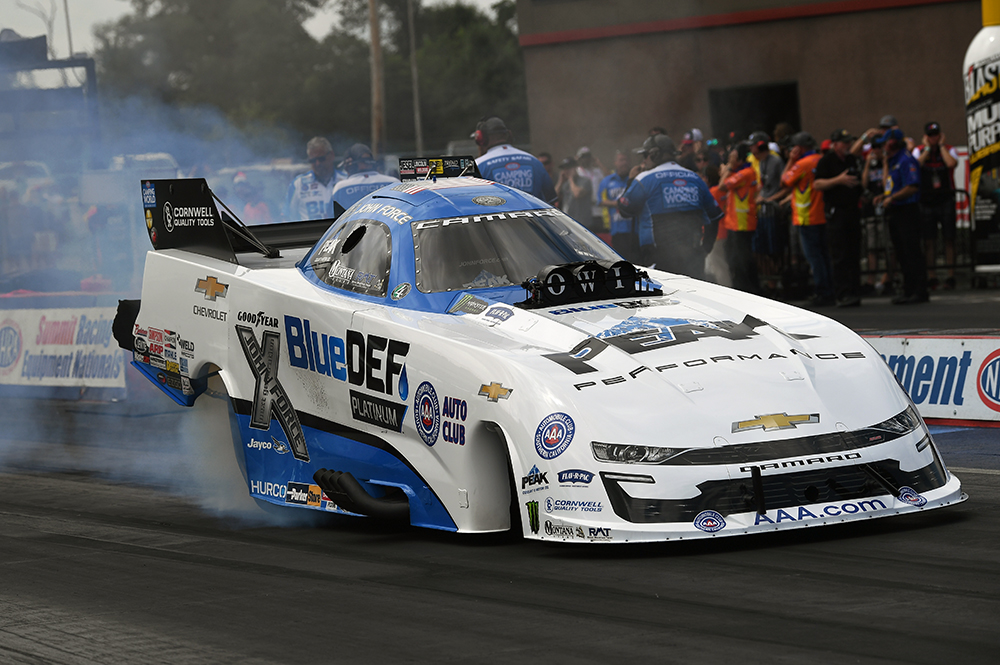 MORRISON, Colo. (July 14, 2021) – John Force and his PEAK / BlueDEF PLATINUM Chevrolet Camaro SS team have the chance to secure the Funny Car Championship points lead when they head to the Dodge//SRT Mile-High NHRA Nationals at Bandimere Speedway this weekend. Sitting in second by only 53 points, the No. 1 spot is in reach for the 16-time world champion.

Force and his Daniel Hood and Tim Fabrisi led PEAK / BlueDEF team steadily worked their way to dominating the Funny Car field. They kicked off the 2021 NHRA Camping World Series season with a quarterfinal finish at the season opening Gatornationals. At the first four-wide event of 2021 at The Strip at Las Vegas Motor Speedway, Force would qualify No. 2 and at the NHRA Southern Nationals at Atlanta Dragway, Force and his PEAK / BlueDEF team would make their 257th final round appearance. Force earned his 161st No. 1 qualifying position before continuing his dominance into race day at the NHRA Four Wide-Nationals at zMAX Dragway and coming out with his 152nd national event victory. Force then tallied his second win of the season, 153rd of his career at the NHRA New England Nationals. At the most recent event in Norwalk, Force qualified No. 4 and had a quarterfinal finish.

“It’s been a good season. This PEAK Chevy has been running really well. Daniel Hood and Fabrisi, they have a handle on it,” Force said. “I just have to get out there and do my job, and that’s not easy with all these young guys out there running against me. I’ve got to work hard to keep up with them. It’s working so far.”

Given his history at the Mile-High NHRA Nationals, a victory and the points lead are very realistic for Force. He has an NHRA record eight wins at the fan favorite Bandimere Raceway. His first wins came three consecutive years, 1994-96, then again in 2001, 2003, 2011, 2016 and most recently in 2018. His eight wins are coupled with seven No. 1 qualifiers, his most recent in 2017.

“I’ve always loved racing in Denver. I’ve done well here so Denver must like me racing here too. The fans are great and it’s a great show with Bandimere tucked into the mountain here,” Force said. “Hoping to add to those numbers, come up with a big win not just for me but for my sponsors, PEAK, BlueDEF, Old World Industries, Chevy, Gates Belts who are right here in Denver, Cornwell, ParkerStore, Baldwin, all of them. It’s going to be an exciting weekend especially with the night racing.”