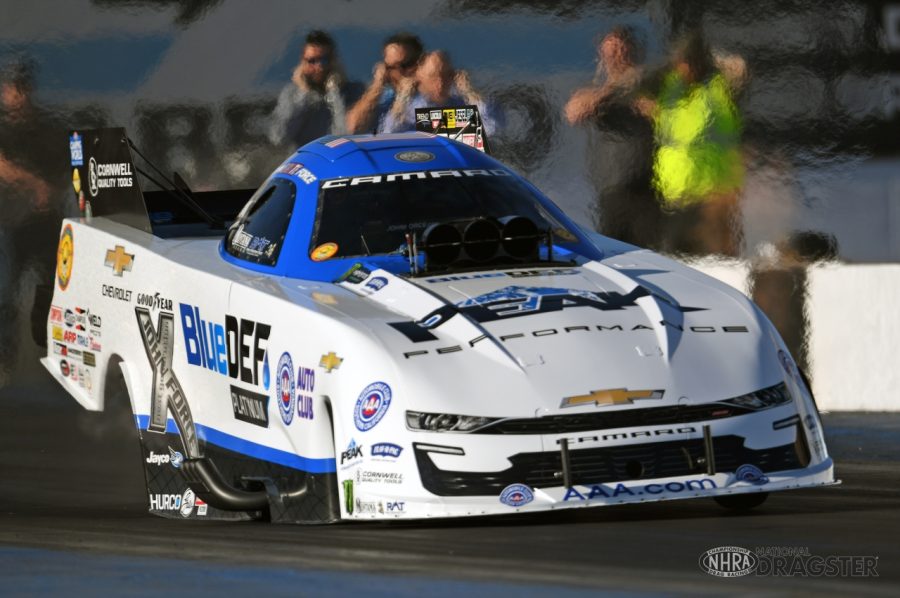 POMONA, Calif. (Feb. 17, 2022) – Starting his 47th year on the NHRA Camping World Drag Racing Series tour, John Force, the 16-time champion and 154 event-winner, has nothing left to prove, except that he still loves it. Force and his PEAK / BlueDEF PLATINUM Chevrolet Camaro SS team enter the season opening Lucas Oil NHRA Winternationals after surging to three wins and a fifth-place finish in 2021, a position they intend to improve on in 2022.

“It was great being back out at testing. Back with that PEAK BlueDEF team and Danny Hood and Tim Fabrisis. It has me excited for this season,” said Force. ‘We ran really well, consistent and that’s what we’re looking for with this Chevy hotrod. I’m feeling like everything is getting figured. Great to have Austin Prock back with Montana Brand / Rocky Mountain Twist, Brittany looks good with Monster and Flav-R-Pac, Robert with Auto Club and bringing on Powers Solar. I just can’t wait to race. It’s why I’m here. I just love it.”

“This place is home. It’s my history. I grew up here,” Force said. “I love racing at Auto Club Raceway. We get things started here and then we wrap them up here. We haven’t had a chance to do that the last couple years so this feels good, feels normal. I’m excited. I’m looking to get this PEAK BlueDEF Chevrolet in the winners circle, get the season started off right.”