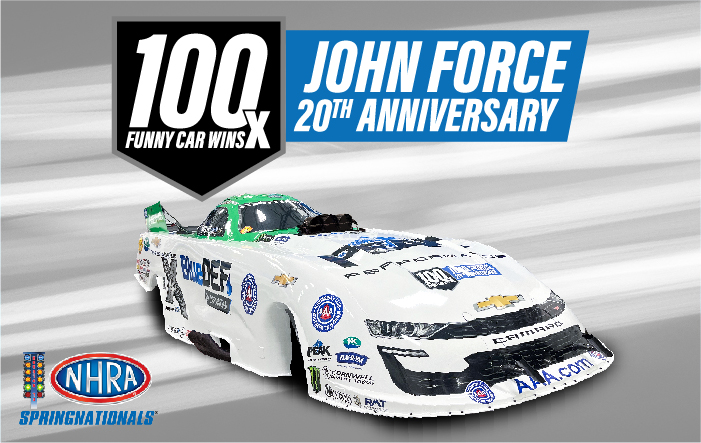 BAYTOWN, Texas (April 21, 2022) – Reaching yet another milestone in his illustrious career, John Force will feature a special paint scheme on his PEAK / BlueDEF PLATINUM Chevrolet Camaro SS to celebrate the 20th anniversary of his 100th win at this weekend’s NHRA SpringNationals at Houston Raceway Park, the final NHRA Camping World Drag Racing Series event to be run at the beloved facility.

“Houston Raceway Park has been good to me over the years. I’m looking forward to getting back there. The Angel Family put on a great show and NHRA is working hard to make this one special,” Force said. “John Force Racing, not just me, has a lot of history here, a lot of wins here, a lot of success. PEAK, they wanted to do something special for the 20th anniversary of my 100th win and I’m excited to get out and show this Chevy hot rod off. Maybe it will bring me some good luck and get us a win. We’re right there, Danny Hood, Tim Fabrisi all these young kids, they’re working hard and it’ll pay off. We just have to keep at it and I’ve got to keep doing my job.”

Force had pre-season success at testing at Wild Horse Pass Motorsports Park in Arizona but stumbled at the season opening Winternationals. The PEAK / BlueDEF team turned things around back at Wild Horse Pass Motorsports Park for the NHRA Arizona Nationals. They would qualify No. 3 and have a semifinals appearance. Quarterfinal finishes at both the Gatornationals in Gainesville and the most recent Las Vegas Four-Wide Nationals would keep Force fifth in the points standings, just seven away from fourth.

The NHRA SpringNationals at Houston Raceway Park kickoff Friday night with the first round of qualifying at 7 p.m. CT. Qualifying continues with sessions at 2 and 5:15 p.m. CT. Eliminations are scheduled for Sunday at 11 a.m. Television coverage will be on FOX Sports 1 (FS1) beginning Friday night at 7 p.m. ET. A second qualifying show will air Sunday at 10:30 a.m. before eliminations at 7:30 p.m. ET.