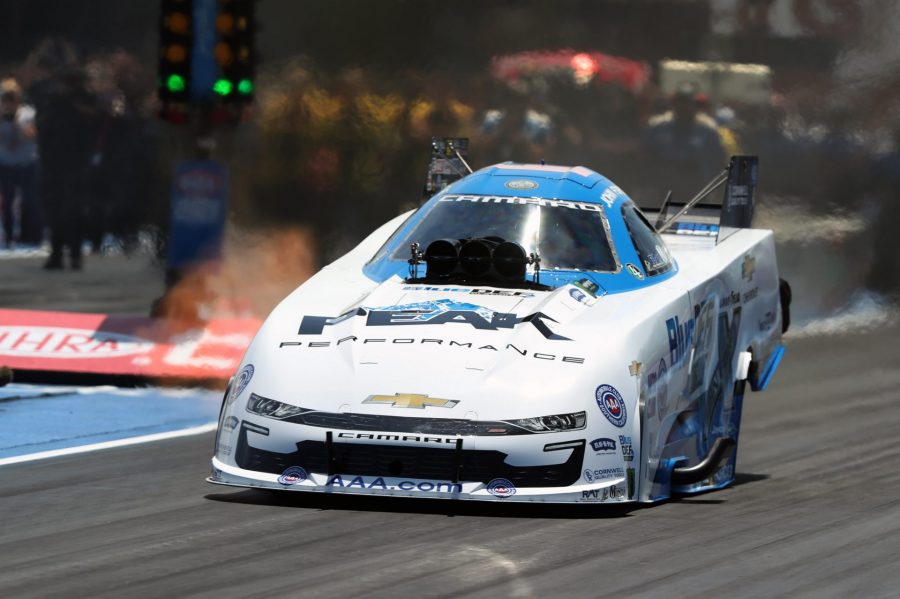 TOPEKA, Kan. (Aug. 11, 2021) – John Force and the PEAK Antifreeze Chevrolet Camaro SS Funny Car team continue their steady rise to the NHRA Camping World Drag Racing Series points lead when they head to the Menards NHRA Nationals at Heartland Motorsports Park. Just 36 points from the No. 1 spot, the 16-time champion shows no sign of letting up as the Countdown to the Championship edges closer.

Force and his Daniel Hood and Tim Fabrisi led PEAK Antifreeze team put their name in as championship contenders early in the 2021 season. At the NHRA Southern Nationals at Atlanta Dragway, the third race of the season, Force and his PEAK Chevy would make their 257th final round appearance after a pair of quarterfinal finishes to open the season. Force earned his 161st No. 1 qualifying position before continuing his dominance into race day at the NHRA Four Wide-Nationals at zMAX Dragway and coming out with his 152nd national event victory. Force then tallied his second win of the season, 153rd of his career, at the NHRA New England Nationals.

Force would have two quarterfinal finishes in Norwalk and Denver, before the PEAK team stumbled to a first round exit at the Sonoma Nationals, fortunately some of their closest competitors had a stumble too. Force is coming off of a semifinal finish at his hometown racetrack, Auto Club Raceway at Pomona, and sits in third, just one point ahead of teammate Robert Hight.

“I love this sport. I live it, I breath it, it’s what I do, it’s who I am and at my age, I can’t believe I’m still in it,” Force said. “These young guys out here, I do what I can to keep up with them. Danny and Tim and the PEAK team, they give me a great car. We’ve been great all season. I just have to get out there and not screw it up. And that’s what I’m trying to do. I’m ready for Topeka. We tested and went match racing, Night Under Fire, and it kept me on my toes.”

Force has won at Heartland Motorsports Park a total of nine times, three times at the no-longer-contested spring event. The only tracks on which he has won more often are Auto Club Raceway at Pomona and Brainerd International Raceway. The last time Force won in Topeka, it was 2008 and his first victory after recovering from injuries suffered in his 2007 crash in Dallas at Texas Motorplex. His nine wins are coupled with 11 No. 1 qualifying positions and six runner-up finishes, most recently in 2015.

“Topeka is an old school race. Been coming there for years. A lot of good memories, wins, final rounds. Great fans and a great racetrack,” Force said. “Where we are in points, we need to keep it going. The Countdown is almost here. The Heartland race could really shake things up with how close everyone is. It’s tough out there, but we’re hanging in there.”