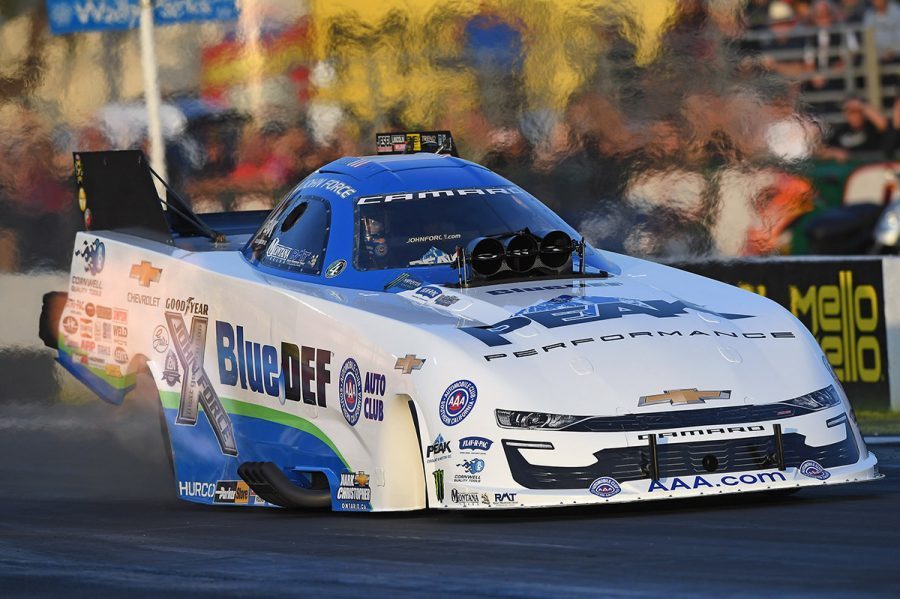 CHANDLER, Ariz. (Feb. 19, 2020) – John Force and the BlueDEF Chevrolet Camaro SS Funny Car team are gearing up for this weekend’s NHRA Arizona Nationals, the second of 24 events on the NHRA Mello Yello Drag Racing Series Season schedule, ready to keep up their season-opener performance as they compete for the driving legend’s 152nd event title.

With a strong ending to the 2019 season and showing at pre-season testing at the Strip at Las Vegas Motor Speedway, Force and the BlueDEF team brought the same energy to the season-opening Winternationals. On race day, the Hall of Fame team owner and driver blasted his way to his 256th final round appearance after sweeping Bob Bode, Tommy Johnson Jr. and Matt Hagan in the first three elimination rounds. In the final, Force faced rival Jack Beckman where he would have the starting line advantage but fall short to Beckman for his 105th runner-up finish.

“Danny Hood, Ronnie Thompson and Tim Fabrisi gave me a great hot rod in Pomona. To go to the finals, that was really good for the BlueDEF team. I’m excited to see what we can do this season,” said Force. “All of us at John Force Racing had a great weekend. Monster is back with Brittany, the Prock kid and Montana Brand / Rocky Mountain Twist finished runner-up and Frank Tiegs brought on Flav-R-Pac. Can’t forget Robert and Auto Club. They’ve been with us for a long time. It’s just really great to be out here with all our sponsors and we’re looking forward to doing it again Phoenix.”

The sixteen-time Funny Car world champion makes his way to Wild Horse Pass Motorsports Park this weekend with more race wins than any other driver in the nitro categories. Force has made 14 final round appearances with eight wins, including four consecutive victories from 1994 to 1997. He’s also qualified No. 1 eight times.

“I’m looking forward to Phoenix this weekend. We’ve had some good times there and some bad, but I always enjoy getting to Wild Horse Pass. I crashed there in 2018 and it was a learning experience, but Courtney went on to win the race so that was good,” said Force. “The last time I won here was in 2005 so it would be nice to get in the show and get another win this year. I have a great team with ‘Ole Blue’.”