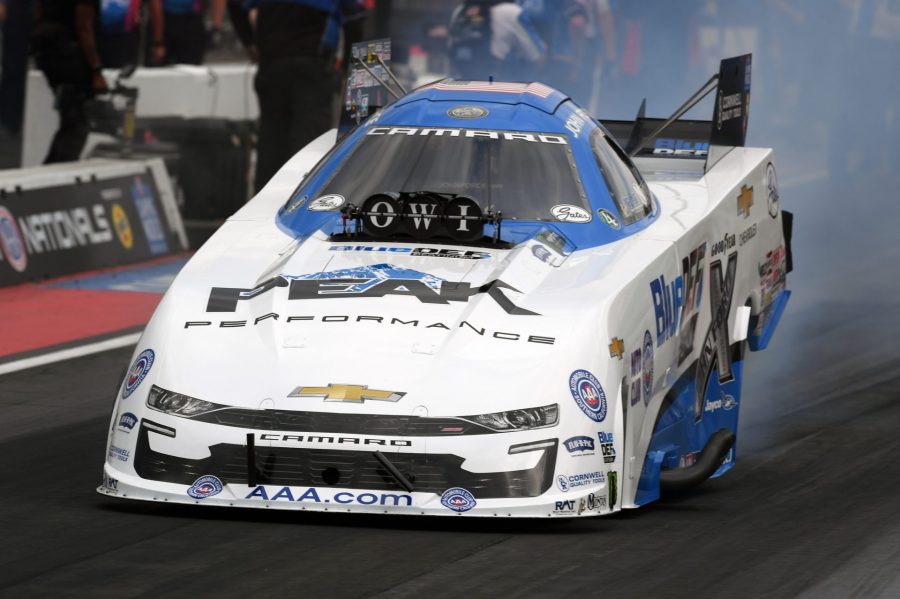 MORRISON, Colo. (July 18, 2021) – Brittany Force and the Monster Energy dragster and John Force and the PEAK / BlueDEF PLATINUM Chevrolet Camaro SS Funny Car each made quarterfinal appearances at the Dodge//SRT Mile-High NHRA Nationals Sunday at Bandimere Speedway. Robert Hight and the Automobile Club of Southern California Chevy had a first round exit at the hands of John Force.

After setting the track elapsed time record with their No. 1 qualifying pass on Saturday night, Brittany Force and the Monster Energy team earned a bye run in the first round of eliminations. The David Grubnic and Mac Savage led team continued their stellar performance with a 3.805-second pass at 327.74 mph on a hot racetrack. In the second round, Force lined up against Clay Millican who had also had a strong performance in the first round and earned lane choice over the Monster team. The 2017 world champion had the better reaction time on the starting line but it her dragster spun the tires down track slowing to 3.819-seconds at 311.99 mph that was narrowly beat by Millican’s 3.815 at 316.30.

“Leaving Mile-High Nationals in third and on a high note! This Monster Energy team picked up another No. 1 qualifier, a track record and six qualifying bonus points. We hit our marks, our numbers. The team did their job, I did my job, and the car did exactly what we wanted it to do, we just got beat,” Force said. “It was a great drag race for the fans. This weekend is not slowing us down. It’s only pushing us to the edge of wanting it more.”

John Force and the PEAK / BlueDEF Chevy team came into eliminations in the No. 5 qualifying position to face No. 10 qualifier Robert Hight and the Auto Club Camaro. Force would run 4.042-seconds at 321.96 mph while Hight would smoke the tires early and shut off for only 9.188-seconds at 85.71 mph.

“Little bit of a rocky weekend for the Auto Club team. We’re used to getting after it and we just missed it a couple times this weekend,” Hight said. “Luckily, we are right on to the next race, and we can turn things around. Sonoma has been good to this team in the past, hopefully that’s the case this year too.”

In the second round of eliminations, after an extended delay for oil on the track, Force would match-up with long-time competitor Ron Capps for the 107th time in their careers, the second most meetings between two drivers in NHRA history. The odds were in Capps’ favor as Force loses traction mid track and has to shut off for a 4.376-second run at 226.47 mph. Capps would go 4.039 at 312.42.

“The mountain is always a struggle for any team coming up here with the altitude. But this PEAK / BlueDEF team survived it. Only went a couple rounds but still good,” Force said. “Now we go down to Sonoma and we’ll see how that goes. I’m happy with this team, young team, to me at least. They’re really good, really coming around with Daniel Hood and Tim Fabrisi and Joe Barlam. I’m really enjoying being with these guys.”