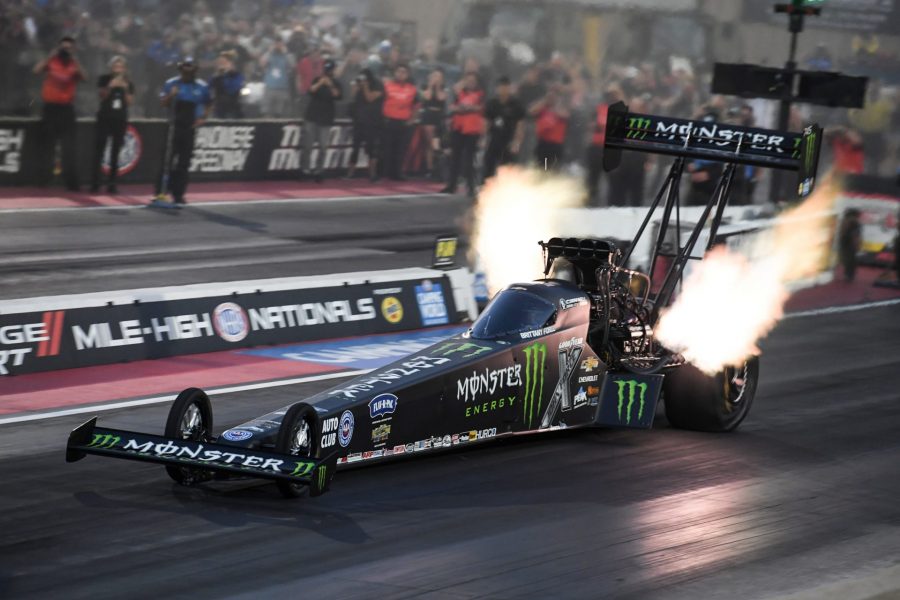 MORRISON, Colo. (July 17, 2021) – Brittany Force and the Monster Energy dragster team rocketed to the No. 1 qualifying position Saturday night of the Dodge//SRT Mile-High NHRA Nationals at Bandimere Speedway. John Force and the PEAK / BlueDEF PLATINUM Chevrolet Camaro SS team landed No. 5 and Robert Hight and the Automobile Club of Southern California Camaro are No. 10.

To start the day off, Brittany Force and her Monster Energy team earned three bonus point when they ran quickest of the second qualifying session at 3.899-seconds at 320.66 mph. The solid run moved them temporarily into the No. 2 spot. Coming into the final qualifying session under the lights, Force and her David Grubnic and Mac Savage tuned dragster ran a track record 3.717-second pass at 326.00 mph to take the No. 1 position.

This is Force’s first top qualifying spot at the Mile High Nationals and the 21st of her career. Bandimere Speedway is the 18th different track at which Force has qualified No. 1 and it is the ninth track where she holds the elapsed time record. The killer run earns Force the fourth bye run of her career in the first round of eliminations.

“That run felt pretty outstanding. When it left the starting line, it felt like a rocket. I knew it was on a good run if it could hold on and it did. Grubby said he was going to push it like he always does and he definitely did. I have to say thank you to my Monster Energy / Flav-R-Pac guys. John Force Racing, we had to take a step back in 2020 and every single one of the guys on my team returned. I think that says so much about their character and their loyalty to this team. I love every single one of those guys,” said Force who earned a total of six bonus points in qualifying. “The fans today were great, sticking it out through the rain. Seeing the stands packed like they were tonight, there’s nothing more motivating than that. Really appreciate the fans, excited to be here and just glad to be back in Denver.”

The PEAK / BlueDEF Camaro of John Force also made serious improvement in the second qualifying session running 4.014-seconds at 320.74 mph to jump six spots into the No. 4 spot. The PEAK BlueDEF Chevy ran into trouble in the third session and had to shut off early. Force would land in the No. 5 spot to take on Robert Hight in the first round.

“Well, we got in the show, and I think we’re ready for tomorrow. Not great that we’ll be running against Robert in the first round, but it happens. This PEAK team has worked hard, I’ve had to work hard. We’re going to keep it going,” Force said. “It was a busy day in our pits, entertaining in our hospitality again. Loved having all our sponsors out there, Baldwin Filters, PEAK, Flav-R-Pac, Gates, we had fun.”

“We wanted that run. Jimmy Prock and Chris Cunningham, they were going after it. Not worried about it. Tomorrow will be completely different conditions so everyone will be on even playing ground,” Hight said. “This Auto Club team does well under pressure, so we’ll see how it goes.”

This will Force and Hight’s 56th career meeting, 15th in the first round. They have split the 14 previous first-round meeting with Hight winning the two most recent. At Bandimere Speedway, they’ve opposed each other three times with Hight winning each time – first round in 2009, and final rounds in 2010 and 2014.

Eliminations at the Dodge//SRT Mile-High NHRA Nationals at Bandimere Speedway are set to begin Sunday at 11 a.m. Television coverage will be on FOX Sport 1 (FS1) with qualifying action continuing Sunday at 3 p.m. ET and eliminations airing at 4 p.m. ET.