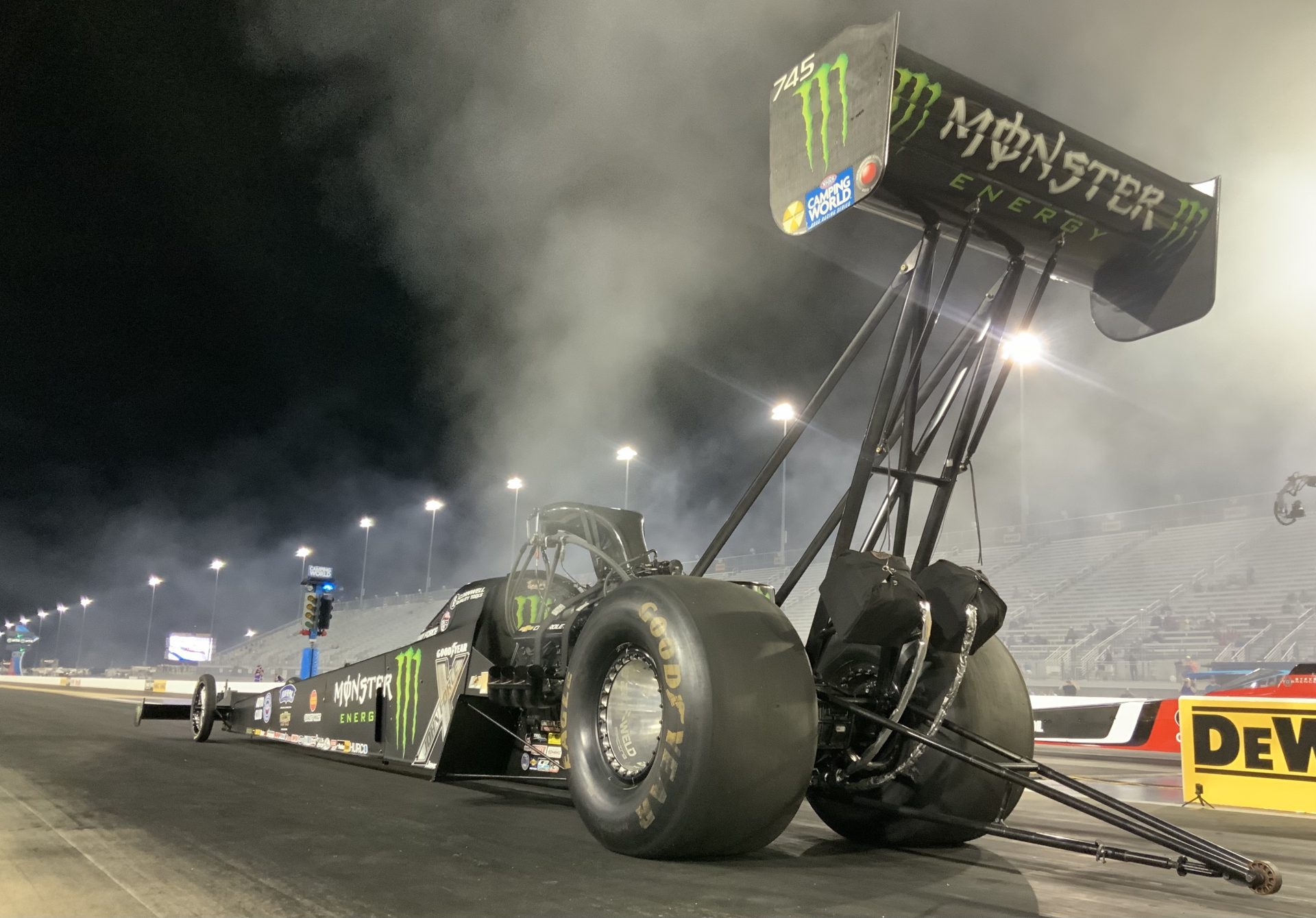 CONCORD, N.C. (Sept. 17, 2021) – Brittany Force with the Monster Energy Top Fuel dragster and John Force with the PEAK Antifreeze and Coolant Chevrolet Camaro SS Funny Car are the provisional No. 1 qualifiers Friday night at the DeWalt NHRA Carolina Nationals at zMAX Dragway. Robert Hight with the Automobile Club of Southern California Chevy rounded out a successful night of qualifying landing in the No. 2 spot.

Chasing her eighth straight No. 1 qualifying position, Brittany Force piloted her Monster Energy dragster to a stellar 3.662-second pass at 331.85 mph to easily take over the Top Fuel No. 1 position. The impressive run wasn’t without its drama, the black and green hot rod suffered an engine explosion at the end of the run.

“It always feels good to come out first run of the weekend like that. Well, I guess it’s debatable, we blew up and that costs a lot but we’re currently No. 1 and right now it’s about getting as many bonus points as we can,” Force said. “David Grubnic, he said we want to do what we did last weekend in Reading. He told me the number he was shooting for and we actually stepped up. To be able to run a 3.66 like that, that’s what we did all last weekend, so pretty impressive for this Monster Energy / Flav-R-Pac team.”

Points leader John Force handled his PEAK Chevy to a 3.860-second pass at 332.18 mph as the final pair of Funny Cars for the night, bumping the blue and red Auto Club Chevy of Robert Hight into the No. 2 position.

“It was a good way to start the weekend. We’re just trying to stay in the game, this PEAK Chevy team. Going low qualifier but we got the perk to follow everybody, see what everyone could do, see what Jimmy Prock could do,” Force said. “I give credit to the guys that run these hot rods. We’re just body and shoes. Daniel Hood, Tim Fabrisi and Joe Barlam, they give me a race car and we go right down the race track. I’m really excited about that. I’d like to at least be in the hunt and I’m in the hunt.”

Hight and the Auto Club Camaro kept up their consistency Friday night when they went 3.878-seconds at 330.07 mph. The Jimmy Prock and Chris Cunningham tuned Chevy are looking for their fifth win at the Carolina Nationals along with a resurgence in the points.

“That was a good run, we wanted more and we can see that there’s more out there. You know we picked up some extra qualifying points and we put a good number on the board,” Hight said. “We’ve got two more tomorrow and we’ll get after it. Jimmy Prock and Chris Cunningham, they’ll get us set up and then have us going rounds on race way

Qualifying at the DeWalt NHRA Carolina Nationals continues Saturday with sessions at 2:30 and 6:15 p.m. Eliminations are slated for Sunday at 10:30 a.m. Television coverage begins with a qualifying show Sunday at 10 a.m. ET on FOX Sports 1 (FS1). Eliminations will be on FOX Broadcasting Network beginning at 4 p.m. ET.