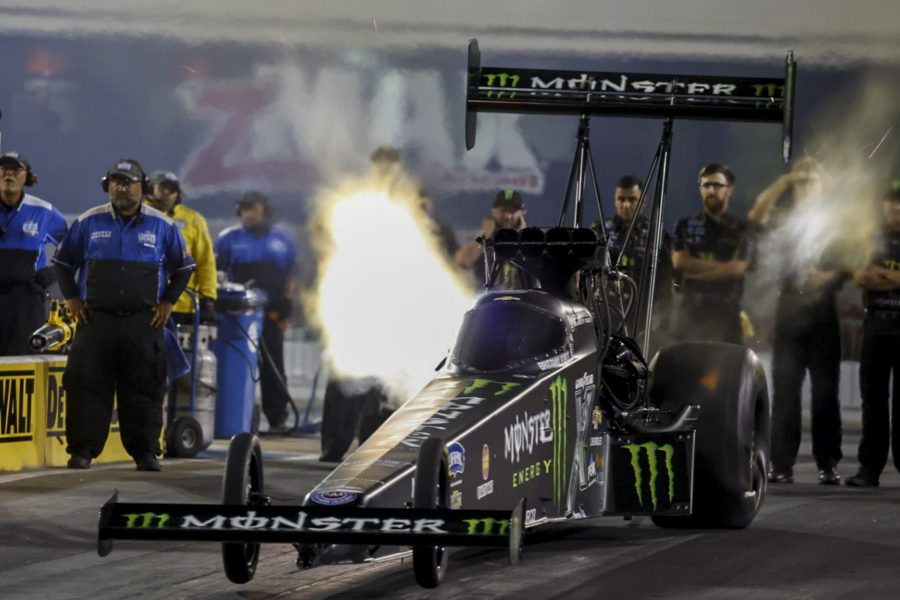 CONCORD, N.C. (Sept. 18, 2021) – For the fifth time in their careers, Brittany Force with the Monster Energy / Flav-R-Pac dragster and John Force with the PEAK Antifreeze and Coolant Chevrolet Camaro SS share No. 1 qualifier accolades Saturday night at the DeWalt NHRA Carolina Nationals. Robert Hight with the Automobile Club of Southern California Chevy secured the No. 2 spot in Funny Car at zMAX Dragway, host of the second of seven events in the NHRA Countdown to the Championship.

For the eighth consecutive time, Brittany Force and her David Grubnic and Mac Savage tuned Monster Energy / Flav-R-Pac dragster are No. 1 qualifiers. They are just one shy of Gary Beck’s Top Fuel record of nine straight starts over the 1982 and 1983 seasons. This No. 1 also breaks a tie with her dad for the John Force Racing team lead. John qualified No. 1 at seven straight events – the last six races of 1994 and the first race in 1995.

Brittany Force and the Monster Energy team secured their 10th No. 1 of the season off their Friday night 3.662-second run at 331.85 mph. The 2017 champion backed-up her performance handling the Monster Energy dragster to an impressive 3.730-second run at 330.31 mph in the second qualifying session on Saturday. In their final qualifying try, Force grabbed three more bonus points when she took her dragster to a 3.677-second pass at 328.06 mph to be quickest all three rounds.

“There’s nothing like getting three solid runs down the racetrack before going into eliminations tomorrow. This Monster Energy / Flav-R-Pac team, we feel good about it. We had solid consistent runs all throughout qualifying. I think we have a good spot tomorrow and looking to have a long day,” said Force who with her qualifying and bonus points took over the Top Fuel points lead for the first time since 2018. “We aren’t slowing our pace down, not playing it safe, we’ve talked about in team meetings, but it never works for us. We want to throw down every single run and that seems to be working for our team.”

John Force took the PEAK Antifreeze and Coolant Chevrolet Camaro SS Funny Car to a 3.869-second pass at 332.18 mph Friday night for his third No. 1 qualifying position of the season, 163rd of his career. Force ran into issues Saturday afternoon, driving into tire shake mid-track to go only 6.648-seconds at 94.87 mph. The 16-time champion bounced back in the third session with a 3.942-second run at 320.89 mph but was docked 10 points for crossing the centerline after the finish line.

“It’s going to be tough tomorrow but to make the Countdown then come into the first couple races and pick up some extra points, it feels good. Really good for my PEAK Chevy guys,” Force said. “We pulled the car back in the first run today, but it was so weak it didn’t go, it shook the tires. We didn’t think we could improve from Friday night so Danny Hood said we’re going to make it go A to B and get ready for tomorrow. It dropped a hole because it pushed me over at the end. Overall for the weekend we’re pretty excited. It’s countdown time and it’s time to show your stuff.

Robert Hight and the Auto Club team will start race day from the No. 2 position after running 3.878-seconds at 330.07 mph on Friday evening. Like Force, Hight would run into trouble mid track going only 6.264-seconds at 106.88 mph after having tire smoke. The four-time winner of the Carolina Nationals would close out qualifying with a 3.901-second run at 328.86 mph.

“Obviously we wanted more out of today, there was more out there but we’re happy in that No. 2 position,” Hight said. “This Auto Club Chevy, this team, we have what it takes to go rounds tomorrow, pick up some points and get in the winners circle. We need to capitalize on the opportunity in front of us, every round counts.”

Eliminations at the DeWalt NHRA Carolina Nationals are slated for Sunday at 10:30 a.m. Television coverage begins with a qualifying show Sunday at 10 a.m. ET on FOX Sports 1 (FS1). Eliminations will be on FOX Broadcasting Network beginning at 4 p.m. ET.