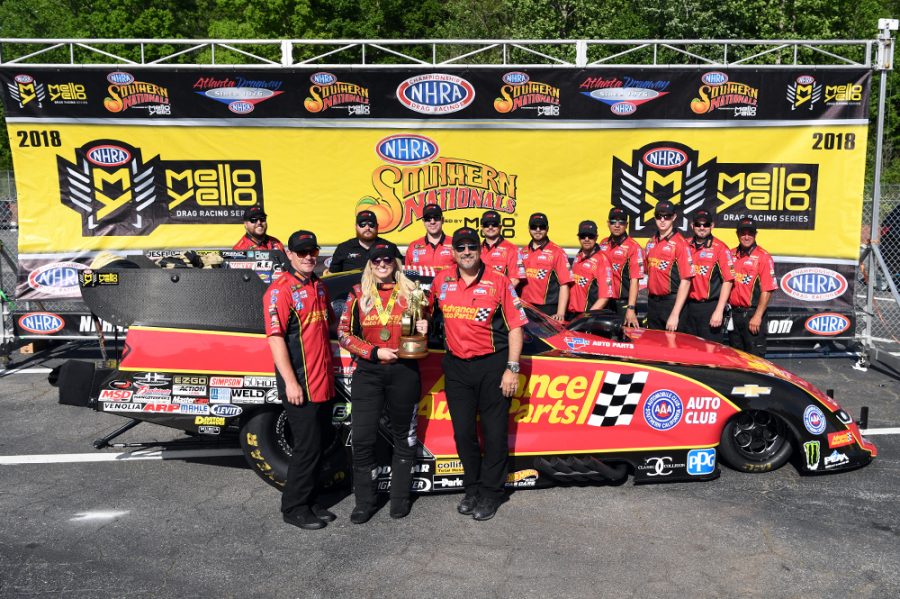 COMMERCE, Ga. (May 6, 2018) — Courtney Force powered her Advance Auto Parts Chevrolet Camaro SS Funny Car to the winner’s circle for the second time this season Sunday at the NHRA Southern Nationals at Atlanta Dragway. Sister Brittany Force raced into the quarterfinals and veteran drivers Robert Hight and John Force had first round exits after strong performances during qualifying.

“It was great to get a win here in Atlanta at the track my sister Ashley (Force Hood) got her first Funny Car win (2008 Southern Nationals). All day long I thought getting a win here would be so cool especially because Ashley is here with us. She doesn’t come to a ton of races so I am glad she can be here to celebrate with me and my team,” Courtney Force said. “I grew up watching Ashley and to see everything she has accomplished in the Funny Car category is great. She has been a mentor and I have always looked up to her. She has always been there to give me advice or anything I needed from my rookie season until now. It has been great to have her support and Brittany’s support. They are my best friends. It will be cool to be in the winner’s circle with them.”

Courtney Force opened race day with a squirrely first round run against Jeff Diehl. Force crossed the finish line with a 4.581 after pedaling her Chevy Camaro on the tricky track. Her second-round win over Tim Wilkerson was more routine, she laid down a 4.144 pass at 297.35 to advance to the semifinals.

Without lane choice, Force defeated the most recent NHRA Mello Yello Drag Racing Series event winner, Cruz Pedregon with a 4.038 pass at 313.12 to land herself in her second Southern Nationals final round. The round win was a bit of an anomaly coming in the unfavorable left lane.

“The second round run was not as easy as it was in Q3. It’s trying out here,” added crew chief Brian Corradi. “I can’t imagine what Courtney thinks when she looks out the front of that windshield and all she sees is tire smoke. She did a great job getting that win over Wilkerson. In the semis we needed everything to work. She did a great job driving and we had the right tune-up. The racetrack is what it is and we’re running the best we can on it. Danny and I are doing our best to give her a consistent race car.”

In the finals, Force outran Matt Hagan with a 4.046-second pass at 313.73 mph in her Advance Auto Parts Chevy. It was the 13th time in her career she had defeated Hagan and third time in a final round.

“We had a great race car all day long. This Advance Auto Parts Camaro team did a phenomenal job all weekend from getting the No. 1 spot to winning the race. We It was a tough match-up like all races against a DSR race car. Our Advance Auto Parts boys got it done and we ended up turning on that win light with a 4.04 to his 4.14. It feels good to be back in the winner’s circle for the second time this season.”

It is Force’s sixth victory from the No. 1 qualifying positions. Her first win of 2018 also came after securing a No. 1 position at the NHRA Arizona Nationals. With the win, Force now takes over the Mello Yello Funny Car points standings by 13 over Jack Beckman who lost to Hagan in the semifinals.

On Saturday, Brittany Force had arguably the Top Fuel dragster to beat after posting the two quickest runs of the final two qualifying sessions going into Sunday’s race day. She moved into eliminations as the No. 2 qualifier with momentum and confidence on a tricky track. In the first round Force dispatched veteran Terry McMillen with the quickest Top Fuel run of the session, 3.779 seconds at 321.73 mph in her Monster Energy dragster and drew rising star Blake Alexander in the next round.

Unfortunately for the 2017 NHRA Top Fuel world champion, Alexander was on his way to a Cinderella-like run to the finals at the Southern Nationals that included an upset win over three-time world champion Antron Brown in the first round, an upset of Force and a win over Steve Torrence in the semifinals. A nearly psychic reaction time by Alexander gave him a starting line advantage and then Force’s race car smoked the tires in the right lane to end her day.

“Overall, we had a pretty good weekend. We made some good passes down the track that’s definitely difficult and were the No. 1 qualifier. I went out first round and had an awesome lap but second round we weren’t able to repeat, we weren’t able to do that same thing and unfortunately got beat by Blake Alexander. We have a weekend off and will go to the next one.”

For No. 2 qualifier Robert Hight the first round was a tough reflection of his up and down qualifying weekend. On Friday night Hight and the Auto Club Chevrolet Camaro SS Funny Car rocketed to the top of the field with a 3.952 second run at 327.59 mph. Hight’s speed was the best of the class for the weekend and the three-time Southern Nationals winner felt confident his team had turned a performance corner.

“We had to make big changes (on Friday) and we had no idea what it was going to run,” said Hight. “I am pretty impressed with that run. It left good and we had good early numbers. I am really impressed with the speed. We probably learned something that will help us down the road.”

On Saturday the team battled tough track conditions in the first session and after getting bumped back one spot they took a shot at grabbing No. 1 back in the cooler late afternoon session. They over-powered the track and came into race day as the No. 2 qualifier with a first round match-up against Bob Tasca III.

Both Funny Cars launched hard off the starting line with Hight in the right lane and just before half-track both Nitro coupes lost traction. Hight wrestled his Auto Club Camaro back under control and charged to the finish line but, unfortunately, he hit the stripe about a tenth of a second after his opponent.

“This is a tricky track and we thought we had a tune-up to go rounds,” added Hight. “On Friday we made one really stout run and last night we tried to duplicated that run. On race day we needed something different. This is the end of a three-week, three-race stretch and I think we learned enough to get us on the right track heading into the summer. We will be ready to run some low numbers in a couple of weeks in Topeka.”

John Force pulled up beside rival Ron Capps for the 92nd time in NHRA Funny Car competition. Force, as the No. 5 qualifier, had lane choice and the confidence of progressively quicker ETs each of the four qualifying sessions. Before the first round match-up, Force held a 56-35 head-to-head win record over the 2016 champion.

When the Christmas Tree flashed Force’s PEAK Coolant and Motor Oil Chevrolet Camaro took off and, by half-track, the seven-time Southern Nationals winner was side by side with Capps who hazed his Goodyear slicks. As Force was pulling away, his Funny Car also lost traction and the 148-time winner had his hands full as the finish line approached. Both drivers crossed the finish line down on power and wagging the tail ends of their 10,000 horsepower race cars with Capps edging Force by .04 seconds or approximately 16 feet.

“We both had our hands full on that run. We got better every run in qualifying and I thought we were in a good position to go rounds today,” said Force. “(Ron) Capps is a tough racer. He is a champion. We have raced each other more times than I can remember. My hot rod was all over the place at the top end and I thought I had him. We will head back to Indy and figure some things out. We are taking it slow because it is a long season.”