COURTNEY FORCE TALLIES HER SEVENTH NO. 1 QUALIFIER OF THE SEASON AT BRISTOL DRAGWAY 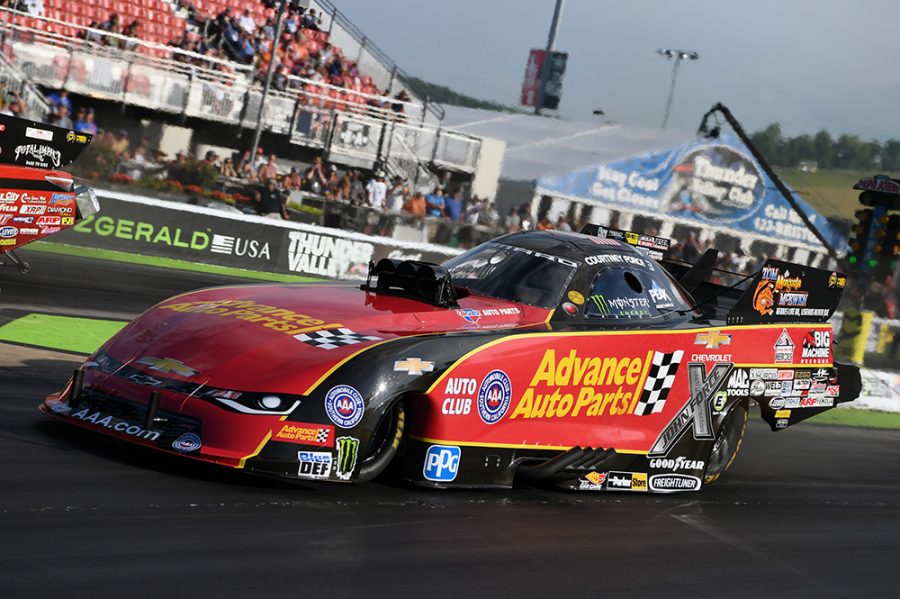 BRISTOL, Tenn. (June 16, 2018) — Courtney Force powered her way to her 24th career No. 1 qualifier Saturday at the Fitzgerald USA NHRA Thunder Valley Nationals. Robert Hight will start race day from the No. 3 position, John Force will start form No. 6 and, in Top Fuel, Brittany Force is heading into eliminations in the No. 5 position at Bristol Dragway.

To say Courtney Force is dominating the Funny Car category is becoming an understatement. The driver of the Advance Auto Parts Chevrolet Camaro SS has now tallied seven No. 1 qualifiers just 11 races into the NHRA Mello Yello Drag Racing Series schedule. With a 3.993-second pass at 325.92 mph from Friday night, Force continued her streak of qualifying inside the top four and picked up her second consecutive No. 1 qualifier.

“It’s been a great start to the season for the Advance Auto Parts Chevy Camaro team. I’m really proud of my guys. They have been really fighting hard and they have a good thing going. I’m really excited with the direction our season is going. We’re just trying to keep our heads straight, staying focused round by round. We’ve had a few wins and we’re in a really good spot obviously being in the points lead right now but continuing to just focus on getting the bonus points. Everything resets right after Indy, so we’re just trying to stay focused and learn a lot about this car. We have a long season to go and just really excited on how everyone on my team has jelled right now.”

Force has four wins already this season and she’s won all of them from the No. 1 qualifying position, a drastic change from her 2017 season when she collected seven No. 1s but no race wins. While Force is confident in her team heading into eliminations where she’ll face Jonnie Lindberg, she’s also aware that her 3.993 run from Friday night was the only clean pass the Advance Auto Parts team had.

“This weekend, to be completely honest, we had only one good run – that 3.99 – and it was in prime conditions, so it would be awesome to take all the credit and say we’ve had bonus points on every run. But we didn’t have a consistent car like I think we have had in the last few races. We’re going to have to learn quick tonight and learn something from our runs yesterday and today and build off of that. It’s a tricky racetrack and I think we’ve struggled a little bit. Hopefully tomorrow is a better day and we can get it down there. I’ve got the faith in my team. Those guys are smart, they know how to get it done and looking forward to racing out here on Father’s Day at Thunder Valley.”

Two-time and reigning Mello Yello Funny Car Champion Robert Hight will start from the No. 3 position on Sunday driving the world’s quickest and fastest Funny Car. Hight, who has driven the Auto Club of Southern California Chevrolet Camaro SS through the 1,000-foot course in as few as 3.793 seconds at almost 340 mph, believes that the secret to Sunday success is simply for crew chiefs Jimmy Prock and Chris Cunningham to find a way to get his hybrid hot rod to complete the course on all eight cylinders.

“We didn’t do a good job today of keeping it on eight cylinders,” he said after stopping the timers in 4.598 seconds on his final qualifying run. “We’ve got to get this thing on eight cylinders. The last run was showing some hope. It was quick to the 330, then it put a cylinder out, hit the bumps and moved way over and I lifted. The trick’s going to be to stay in the right lane tomorrow. Keep lane choice every round, keep it on eight cylinders and be ready to pedal it. You’re going to see a lot of pedalfests out there. The driver’s going to earn his money tomorrow.”

The 2011 Bristol winner will start his latest bid in a first round match against Jeff Diehl, whom he beat in the opening round of the Thunder Valley Nationals in both 2016 and 2017.

Like Hight, teammate John Force, the 16-time champion and driver of the PEAK Coolant and Motor Oil Chevrolet Camaro SS, believes that keeping the engine running on all eight cylinders is key. Force, will open his quest for a fifth Bristol title against 2016 world champ Ron Capps against whom he has raced at least once in each of the last 22 seasons.

“Capps? He’s a good man,” Force said. “He’s a champ. He’s a winner. But I’m ready. Tomorrow’s all about who can get from A to B and make it stick. Our PEAK Camaro is coming around. The last qualifying run it dropped a couple holes, but it made it to halftrack. That’ll give my guys some data.”

Brittany Force’s 3.875-second pass at 320.20 mph from Friday night lands her and the Advance Auto Parts Monster Energy dragster in the No. 5 qualifying position facing Doug Kalitta. The last time Force qualified fifth was Dallas 2017 and she went on to win the race. Also on the reigning world champion’s side heading into Sunday race day, her final qualifying pass was one of the few clean runs of the two sessions. Saturday qualifying was tricky for the nitro categories, but Force and her team were able to put together a 4.042-second pass at 296.89 mph during the heat of the day, which should have them optimistic headed into a predicted even warmer Sunday.

“It’s definitely been a tricky weekend, not just for us, but for all the teams. It’s a tough track, especially in the heat,” Force said. “We’ve had more luck in the right lane so that will factor into tomorrow. But it’s kind of one of those weekends where it could be anybody’s game so we’re going to go out and do the best that we can and hopefully turn on some win lights. It got down there in the heat of the day (on the last qualifying run). We’re probably going to use a lot of the data from that run going into tomorrow.”