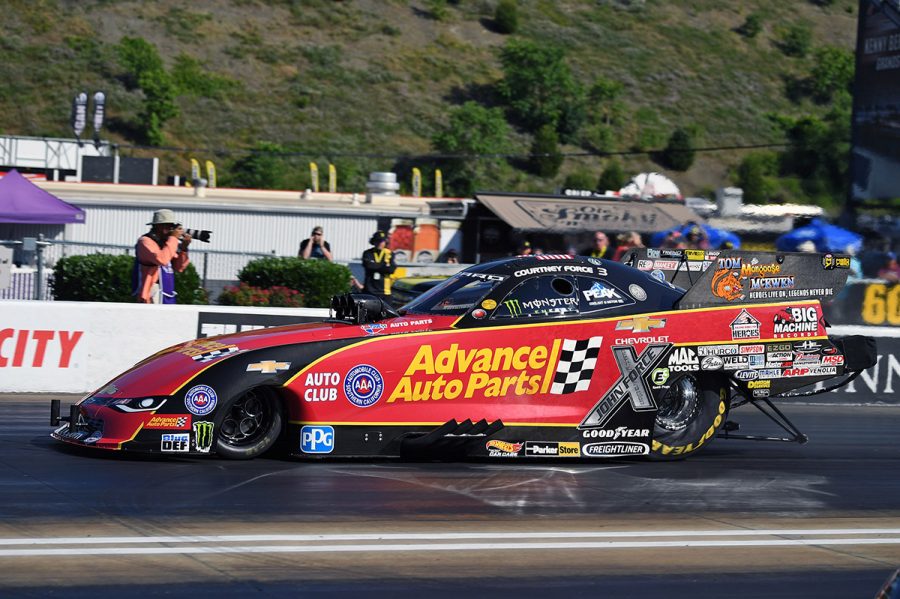 BRISTOL, Tenn. (June 15, 2018) — After day one of qualifying at the Fitzgerald USA NHRA Thunder Valley Nationals, Courtney Force shows no signs of letting up on her domination of the Funny Car class. Force, along with her Advance Auto Parts Chevrolet Camaro SS Funny Car team, raced to the top of the field Friday night at Bristol Dragway. Robert Hight currently holds the No. 3 spot with John Force at No. 6. Brittany Force, in Top Fuel, ended the day No. 5.

Courtney Force has yet to qualify, even preliminarily, outside of the top four in 2018 and, at the 11th race of the NHRA Mello Yello Drag Racing season, it doesn’t look like the Funny Car points leader has any intention of ending that streak. Force, who ran a 4.277-second pass during the first qualifying session, good enough for fourth, came out under the lights with a cool track and blasted to a 3.933-second pass at 325.92 mph to take over the top spot. It was the only Funny Car three-second pass of the day and earned her three bonus points.

“It was bumpy and we didn’t get down there like we wanted to in round one. We kind of looked at it to see what we could do to get it down there. That was Corradi and Hood getting their heads together and figuring it out. Really goes to show those guys are just doing a phenomenal job,” Force said. “It felt great to get the No. 1 spot and pick up some bonus points. Every point counts. It was a great run. It’s just a job well done by Brian Corradi and Dan Hood and every one of my Advance Auto Parts guys. It was hauling the mail down there. It was a little bumpy, so I had my hands full, and I think I want to go back and critique my run because I think I had it a little bit to the outside down there. But it stuck and that’s all that really matters. It’s a great start to the weekend. I’m lucky to be piloting this car for Corradi and Hood. I’m just trying not to screw up and just keep my focus and keep it straight down there.”

With the predicted weather for the weekend, Force knows the final qualifying sessions on Saturday will be critical for Sunday’s eliminations.

“Tomorrow is way more important than today because it’s going to be the same kind of conditions as Sunday,” explained Force. “We struggled in the heat today so we need to get it figured out tomorrow so we’re good going into race day. I think it’s a challenge for all of the drivers. You’ve got to keep that car as smooth as possible.”

After having to shut off early because of a dropped cylinder and crossing the line at only 4.340 seconds in the first qualifying session, reigning world champion Robert Hight went side-by-side with John Force and laid down a 4.077-second pass at 316.97 mph to land in the No. 3 spot.

“It was exactly what we needed to do. (Crew chief) Jimmy (Prock) said going up there we would try to run 4.05 or 4.07, which really isn’t our forte,” Hight explained. “We’d much rather be running better but this is one of those racetracks where lane choice is a big deal and if we didn’t hit it tonight and get it down the track, then we wouldn’t have lane choice. We ended up third. Tomorrow it’s going to be hotter so if we try to make two runs around 4.10, or somewhere in that range, and I think we’d be in a good position for race day.”

Coming off a runner-up finish in Richmond, Va., where he qualified seventh, John Force is currently sixth in the Funny Car lineup. Off the trailer Force shut off early to run 4.340 seconds. With header flames lit under the lights and lined-up side-by-side with Robert Hight, Force improved to a 4.115-second run at 313.51 mph.

“I thought we’d run a little bit better. I thought this PEAK Coolant and Motor Oil hot rod might run an .07 or .08 but it didn’t leave. We got some new clutch discs and we’ve been playing for consistency,” Force said. “Tomorrow’s going to be hotter but I think we can step up a little. Didn’t run what we wanted because it’s been slow early, but it got over the hump that’s down track and that’s the biggest factor here. With the track prep, if you get airborne on the hump, then it won’t hook up. That’s what everyone’s going through, spinning the tires. Courtney, like I had for years, they have magic, her and that Advance Auto Parts team with (Dan) Hood and (Brian) Corradi.”

In the first session, Brittany Force, like many of the other Top Fuel pilots, hazed the tires half track to run a 4.561 that put her in sixth. Force currently holds the No. 5 position with a 3.875-second pass at 320.20 mph after the Friday night session.

“It was a good run. It might have spun the tires a little bit down track because it moved toward the center line, but it was still a solid run. We’re fifth and that’s a good start.,” Force said. “Tomorrow is going to be a little hotter and we’ll just work on getting our Advance Auto Parts Monster Energy dragster down a hot track so that we’re ready for first round on Sunday.”

The third and fourth qualifying sessions at the Fitzgerald USA NHRA Thunder Valley Nationals will take place Saturday at 1:30 and 4 p.m. and eliminations will begin Sunday at noon at Bristol Dragway.