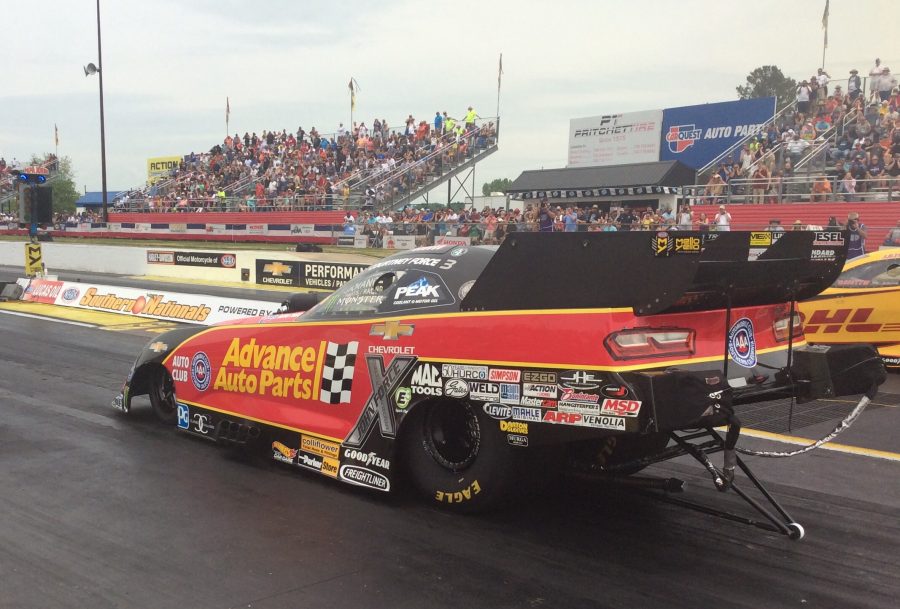 COMMERCE, Ga. (May 5, 2017) — Courtney Force, the winningest female Funny Car driver in NHRA history raced her Advance Auto Parts Chevrolet Camaro SS to the top of the qualifying ladder Saturday afternoon at the NHRA Southern Nationals at Atlanta Dragway. Her stellar pass bumped John Force Racing teammate Robert Hight and his Auto Club of Southern California Chevy Camaro SS to the No. 2 position. John Force locked up the No. 5 spot and in Top Fuel Brittany Force will start race day from No. 2.

Courtney Force laid down a 3.932-second pass at 324.51 mph in the final qualifying session for her second consecutive No. 1 qualifier at Atlanta Dragway, her fourth of the season and 20th of her career.

“To be honest I wasn’t sure if we would be able to improve after Friday,” said Force who was fourth with a 3.987 at 312.64 after Friday night. “We had great track conditions for Q2 and then coming into today we had cloud cover and laid down some great numbers. I am really proud of my Advance Auto Parts team.”

In the third qualifying session Force had a 4.009 pass after her Advance Auto Parts team made last minute adjustments that had the crew thrashing in the pits before pulling straight up to the line to make the run.

“I love being with this team. They were rushing to get up there for Q3. We had a couple problems before that run and still got it down the track with a decent pass,” Force explained. “We tried to power it down and we dropped a cylinder and that slowed us down. It felt good to get it fixed on the last run and have us running on all eight cylinders.”

Force will race Jeff Diehl in the first round of eliminations for the third consecutive year at the Southern Nationals. She is 2-0 at this event against the driver from Salinas, California.
Her sister, Brittany Force, held onto the No. 2 position, steadily improving as qualifying went on. Her final pass of qualifying was a 3.760 at 324.28, only .002 off of the No. 1 pace. The Top Fuel world champion put together four solid passes starting with her 4.066 pass in Q1 followed by a trio of 3.7s — 3.799, 3.764 and 3.760.

Force was quickest in each of Saturday’s sessions, picking up valuable bonus points. Her efforts will pit her against Terry McMillen in the first round on Sunday.

“It was impressive to have the two quickest runs today to get ready for race day with this Monster Energy Top Fuel team,” Force said. “We were really happy with those runs and that was the kind of performance we were looking for today. Those two runs set us up pretty well for tomorrow and we will have Terry McMillen first round. We are No. 2 qualifier and I feel pretty good about that. We want to have a long day tomorrow and get this Monster Energy race car back into the winner’s circle.”

Hight, who held the top spot at the end of Friday, will begin eliminations from the No. 2 spot after his 3.952 pass at 327.59 from Friday night. The two-time and reigning world champion has qualified No. 2 at Atlanta Dragway twice before, 2006 and 2007, both times he made final round appearances and won in 2007. He has had a total of six finals with three wins at the historic track.

“This Auto Club Chevrolet Camaro has a lot of power. We saw that last night,” Hight explained. “We made a big jump on the performance and we were trying to figure a few things out today. We were trying to get that No. 1 spot back from Courtney in that last session and we just overpowered the left lane. We will get this Funny Car under control for the first round tomorrow. I have had a lot of success at Atlanta Dragway and I am confident going into tomorrow. Jimmy (Prock), Chris (Cunningham) and I will get together and get a game plan together for the conditions tomorrow.”

In the first round, Hight will face rival Bob Tasca III, an opponent he is 17-6 against.
Team namesake John Force rounds out the JFR Funny Cars in the No. 5 position with his 3.979 at 324.67 that came in the fourth qualifying session for his PEAK Coolant and Motor Oil team. After a difficult start to the season, Force welcomes the top half qualifying position.

“Considering what we have been through, my crew chiefs Jon Schaffer and Jason McCulloch, working with the brain trust, gave me a good car this weekend. It isn’t the fastest yet but this track was tricky for a lot of the teams,” Force said. “We got quicker and that showed we are moving in the right direction. We picked up some of those bonus points and right now we are fighting to get back into the Top Ten. It is a long season and we are making progress.”

As for this weekend, Force knows his team has what it takes to get to the winner’s circle but it’s all about progress and taking the right steps. That has shown through qualifying as Force, like daughter Brittany, improved with each round from a 4.159 to 4.042 to 3.988 and ultimately his No. 5 qualifying run of 3.979.

Force’s entire team is happy to see him making competitive passes and keeping things together down the race track.

“I sure hope that all of our JFR cars are coming around,” added Courtney Force. “I was feeling pretty good watching my dad and his PEAK Camaro make some good runs this weekend. He was running right behind me.”

“I am excited to see John running better,” Hight continued. “When we have three strong Chevrolet Funny Cars we are a tough team. I think we could get three race cars to the semifinals if things work out.”

The hunt for another Wally for each of the John Force Racing drivers begins Sunday at the NHRA Southern Nationals with eliminations at 11 a.m. at Atlanta Dragway.