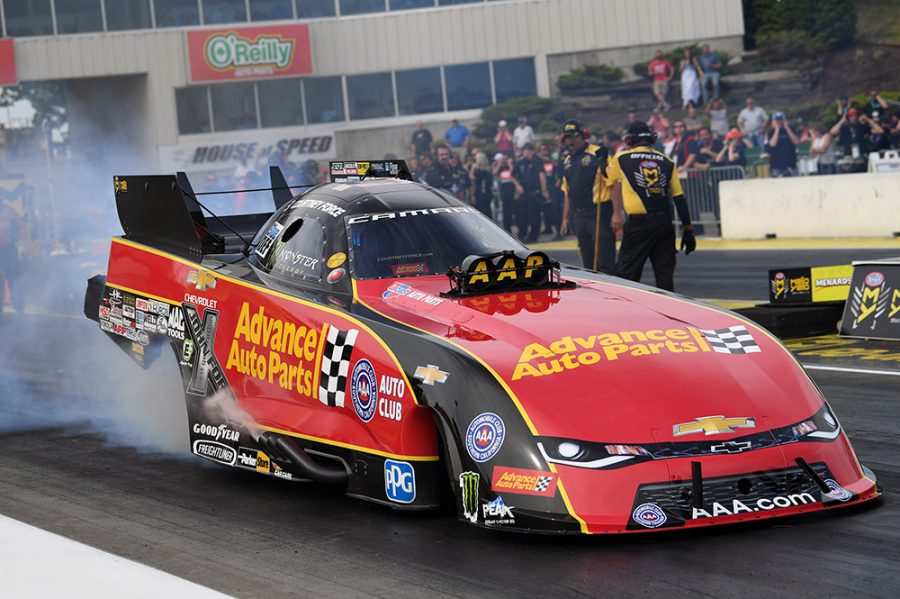 TOPEKA, Kan. (May 18, 2018) — Courtney Force continues her Funny Car dominance with a provisional No. 1 qualifier Friday at the Menards NHRA Heartland Nationals at Heartland Motorsports Park. Her father, John Force is in the No. 9 position and teammate Robert Hight rounded out the John Force Racing Funny Cars in the No. 14 position. Brittany Force is currently No. 8 in Top Fuel.

Courtney Force powered her Advance Auto Parts Chevrolet Camaro SS Funny Car to a 3.911-second pass at 321.73 mph during Friday’s final Funny Car pass. During the first session, Force was also quickest on a hot and tricky race track running a 4.020 at 307.51.

“We had a decent run in Q1. It tried to spin (the tires) down track which is why our speed went down to 307 mph,” Force said. “I said in the top end interview I knew that we had a little bit more. When you have Corradi and Hood tuning your race car it feels pretty good. We went back up there and laid down a 3.91 and kept our top spot.”

Having the quickest runs of each session earned Force, who led the points standings heading into the weekend, six valuable bonus points. Force is chasing her fifth No. 1 qualifier of the season, third consecutive, and second at Heartland Motorsports Park. With two wins already under her belt in the 2018 season, it’s safe to say Force has the Funny Car to beat.

“It is amazing to have a car this good. When we went into the three in a row we said we wanted to come out on top and hopefully start moving up in the points. We have the points lead and we know it isn’t by much but it is important. We picked up three bonus points in Q1 and three more that round. It is a big deal to be running consistently like this. A job well done by every single guy on this Advance Auto Parts team. This is a good start in Kansas. We have a lot of good memories here and hopefully we can make a lot more.”

Force has qualified top five at four out of six appearances at Heartland Motorsports Park including doubling up with sister Brittany Force in 2014, a feat the pair have repeated twice more including the 2018 Charlotte four-wide race. Courtney Force went on to win the 2014 Heartland Nationals, it was the 100th NHRA national event victory by a woman.

“This has been a good track for us,” added Force. “When I come up here I think about the time I was up here with my sister Brittany as No. 1 qualifiers. We are hoping to seal the deal here and wind up in the winner’s circle together. We tried to do that a few years ago. This is a good start for us but we will have a long day tomorrow.”

Currently qualified ninth, John Force ran a 4.053 at 314.31 during the second session to improve from his 12th position. Force and his PEAK Coolant and Motor Oil team were running conservative as they continue to make progress after a tumultuous start to the 2018 season.

“We are not where we want to be. We had to slow it down to make sure we got it down the race track. It ain’t like we we’ve been perfect here,” Force explained. “We have been learning the last few races. Mainly, with the weather coming tomorrow, we wanted to be careful because you don’t want to get on the outside and then can’t get in the show. It was a good run and (Jon) Schaffer and (Jason) McCulloch did a good job. We’ll try and get out of the bottom half tomorrow.”

Reigning world champion Robert Hight is currently 14th in his Auto Club of Southern California Chevrolet Camaro SS Funny Car. Hight struggled to get down track and had a 4.126 pass at 241.20 as his best run of the day. With two more qualifying sessions tomorrow, Hight knows his team will be ready to make a go at the No. 1 spot. He has a history of qualifying well at Heartland Motorsports park, he has qualified inside the top-10 12 out of 13 times and qualified No. 1 four times.

“We aren’t where we want to be for sure. We didn’t get a solid pass down track on either of our runs today. We will get after it tomorrow. Jimmy will look at the data tonight and see what we can change. We have won here before and we will get it figured out. I have a lot of confidence in this Auto Club team.”

In Top Fuel, Brittany Force holds the No. 8 position after shutting off early to a 3.852 pass at 277.03 in the second qualifying session. She opened the day with a 5.061 and landed herself in 12th after smoking the tires in the first session. Despite the early shutoff, her second run was what her Monster Energy team was looking for.

“I feel good,” Force said. “The crew chiefs were very happy with that last run, I know we didn’t get it all the way down there — I lifted a little early because it moved around. It put a 3.85 on the board and we can definitely work with that. We’ll get two more runs tomorrow and hopefully it might cool down a little bit and we can step it up. I feel good about this weekend and race day on Sunday.”

Qualifying at the Menards NHRA Heartland Nationals continues Saturday with sessions at 2 p.m. and 5 p.m. Eliminations are scheduled for Sunday at 11 a.m.