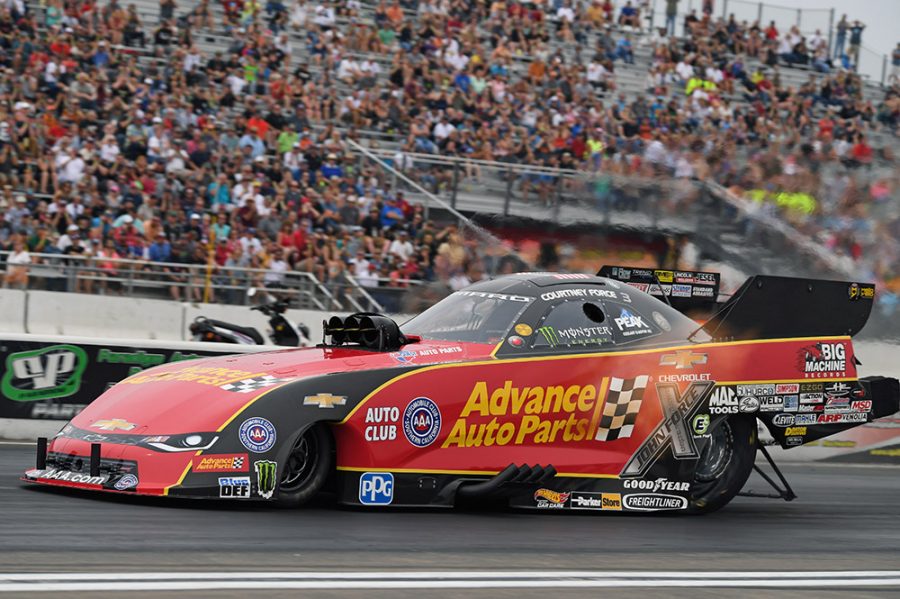 Courtney Force and the Advance Auto Parts team led John Force Racing with a semifinal finish at the Lucas Oil NHRA Nationals on Sunday. Brittany Force and Robert Hight each had quarterfinal exits and John Force had an early Sunday.

Courtney Force, who was the No. 10 qualifier after a less than desirable two days of qualifying, powered her Advance Auto Parts Chevrolet Camaro SS Funny Car past Jim Campbell and Jonnie Lindberg before being defeated in the third round by eventual race winner Jack Beckman. Against Campbell, Force made the quickest pass of the round at 3.973-seconds and 326.00 mph earning her lane choice against Lindberg.

The Advance Auto Parts team continued to look stout as they laid down a 3.945-second pass 326.48 mph against Lindberg, a time that would hold up to be second quickest of the event. In the semifinals, Force just didn’t have enough to get around Beckman. The Advance Auto Parts team ran 4.040 seconds at 320.51 mph while Beckman ran a 3.968 at 324.83.

“It was an awesome day by my Advance Auto Parts team considering coming into the weekend here we struggled a little bit through qualifying. We couldn’t get the car running as quick as we would have liked but we found that Chevy power when we came into elimination day on Sunday. We were definitely able to step it up and consistently run in the threes,” Force said. “I’m really proud of my team, proud of (crew chiefs) Brian Corradi and Dan Hood for making this car fly down that racetrack when we needed it most. Being able to go a few rounds and pick up more of those points is a big deal for us, especially when we’re heading into the U.S. Nationals. We have struggled here in Brainerd so it feels good that we were able to some rounds. I think we have a good handle on this car. We’re looking forward to getting to Indy to test and see if we can continue to make fast runs and find that consistency before the Countdown.”

No. 1 qualifier Robert Hight, who was quickest three of the four qualifying passes, defeated Cruz Pedregon in the first round to cross the finish line at 4.206-seconds after smoking the tires. In the second round, Hight and the Auto Club of Southern California Chevrolet Camaro SS team weren’t as lucky and had to shutoff early and watch J.R. Todd drive around them.

“Race day didn’t go the way we wanted. We spun (the tires) first round and were able to get a win, but then second round it burned a piston and we haven’t done that in forever. Because of that, pan pressure shuts it off. It’s a mandatory safety feature NHRA has. We were quite a bit ahead and were going to win the race and it quit. (Crew chief) Jimmy (Prock) will not ignore something like that even though we haven’t been doing it often, he won’t let it happen again,” Hight said. “We’re going to go test Wednesday and Thursday and get ready for Indy. A little more testing and I think we’ll be right where we need to be in the Countdown.”

Back in the black and green of the Monster Energy dragster, Brittany Force entered race day in the No. 6 position after finding her stride during Saturday qualifying. The Monster Energy team continued to improve through eliminations running a 3.910 second pass to defeat Richie Crampton in the first round. Despite picking up the loss to Antron Brown in round two on a holeshot, Force raced to a 3.746-second pass that ended up being second quickest of the event.

“It was a little bit of a tough weekend for us. We really struggled finding consistency, but on race day we had a good race car. We ran .74 (3.746 seconds). Awesome run for our team. It’s just that I wasn’t on the Tree and we got beat on a holeshot,” explained Force. “Overall, looking at the weekend, we’re leaving on a good note. I feel like we have our race car back and we’re still eighth in points, so that’s what is really important right now.”

John Force will remain eighth in the Mello Yello Points standings despite a rough outing at Brainerd International Raceway. Force qualified 13th off the efforts of his 4.029-second pass and it would his best run of the weekend. In round one, Force and PEAK Coolant and Motor Oil Chevrolet Camaro SS team lined up against Tim Wilkerson and lost traction for only a 6.208 pass.

“We struggled this weekend. We have had a lot of success here in Brainerd. I’ve won here and been No.1 qualifier before. This weekend we just didn’t get a handle on the race track. A lot of teams struggled but I am not worried. We are going to test in Indy this week and then we have the U.S. Nationals. That’s the biggest race of the year and this PEAK team will be ready. The Countdown is right around the corner and we will be in the hunt for sure.”