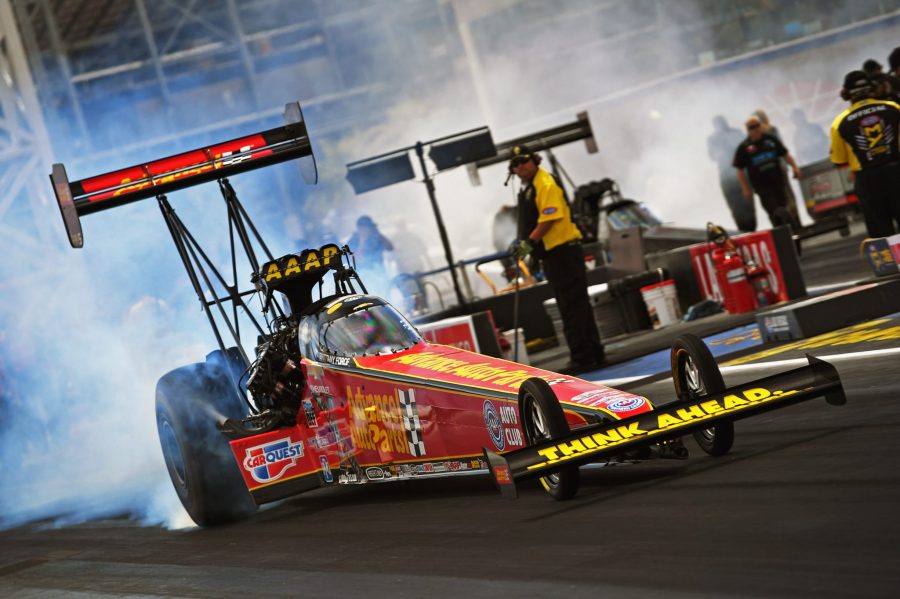 LAS VEGAS (April 6, 2019) — Brittany Force and the Advance Auto Parts team held onto the No. 3 qualifying position Saturday at the DENSO Spark Plugs NHRA Four-Wide Nationals. Her teammates, Robert Hight who is No. 9, John Force who is No. 6 and Austin Prock now No. 12 all made steady performance improvements through two days at The Strip at Las Vegas Motor Speedway.

Brittany Force and the Advance Auto Parts team are qualified No. 3 off the efforts of their first qualifying pass of 3.733-seconds at 322.88 mph from Friday afternoon. Starting off Saturday qualifying, the Advance Auto Parts team ran into trouble on the burnout and weren’t able to reverse back to the starting line and had to coast to the finish. The run would have only been half-track after the team found and fixed a problem from Friday. For her final qualifying try, Force shut off early but crossed the line for a 3.742-second pass 297.29 mph.

“We’re the No. 3 qualifier but we had a few ups and downs. Its better that things happen during qualifying and not on race day. We lost that third round because of a reverser cable. That was unfortunate but we all learned from it and we’re all moving on going into race day,” said Force. “I’m excited to be out here at the DENSO Four-Wide. This Advance Auto Parts team, we’re looking for our first win together so hoping to get the job done tomorrow.”

Force will face Cameron Ferre, Richie Crampton and Scott Palmer in the first round. She’ll be racing for her second win in the four-wide format but first at The Strip.

After making two solid passes on Friday night, John Force and the PEAK Coolant Motor Oil / BlueDEF team continued their steady progress into Saturday. In the third qualifying session, Force powered his Chevy Camaro to a 3.931 at 325.92 mph that moved him up one spot to No. 6 before running 3.925-seconds at 323.74 to solidify the position.

“All of our cars are in. This is the four-wide and I won the inaugural in Charlotte and I’d like to try and win again but I got some tough competition. Even in my own camp with Robert Hight,” said Force. “I’m going down the race track. We have pretty good numbers and I’m learning how to drive all over again. It’s a different style hot rod. Staging and everything is a little different but I think I have a shot to run with these guys so we’ll see.”

In his first-round quad, Force will be lined up with Cruz Pedregon, Phil Burkhart Jr. and Jack Beckman chasing national event win 150 and his second in the four-wide.

Robert Hight and the Auto Club of Southern California Chevy Camaro SS team will begin race day from the No. 9 position after adding two consistent runs on Saturday. Hight came out in the third session to run a 3.949-second pass at 325.30 mph to shift into the No. 8 spot. The performance of the Auto Club Camaro improved in the final session running 3.931-seconds at 324.67 mph but landed Hight in the No. 9 position.

“We didn’t qualify where we wanted to. Ninth is a long way from where we’ve been qualifying but we improved today so that’s good. Jimmy Prock and Chris Cunningham also know what we’re going to have to do to be more competitive tomorrow,” said Hight. “The way the four-wide format works, all you have to do is be second quick or second to the finish line and you move on. I like our chances. I’ve won four-wide a couple times and I want to win it in Vegas and get my third win of the year.”

Hight will start race day competing against Shawn Langdon, Jeff Diehl and Tim Wilkerson. The points leader is chasing career win 48 and third in the four-wide.

With the exception to his third session, a 4.404-second pass that started Saturday off for him, Austin Prock and his Montana Brand / Rocky Mountain Twist dragster consistently ran in the 80s. Prock was able to improve his performance in the final session and powered his dragster to a 3.829-second pass at 315.42 mph. It was his quickest pass of the weekend but wasn’t enough to move up from the No. 12 spot.

“We made some more progress today. Finally got the car picked up early and ran good to the 60 foot block in the 330,” said Prock. “Q3 today we smoked the tires down track but it was on a good pass, a competitive one. Q4 was another good run but dropped a cylinder so it was going to be one of the best runs of the session and we’re going to get that last piece of the puzzle fixed tomorrow, put it all together and go some rounds.”

Eliminations at the DENSO Spark Plugs NHRA Four-Wide Nationals are scheduled to begin at noon at The Strip at Las Vegas Motor Speedway. To catch the action on television tune into FOX Sports 1 (FS1) at 5:30 p.m. ET.