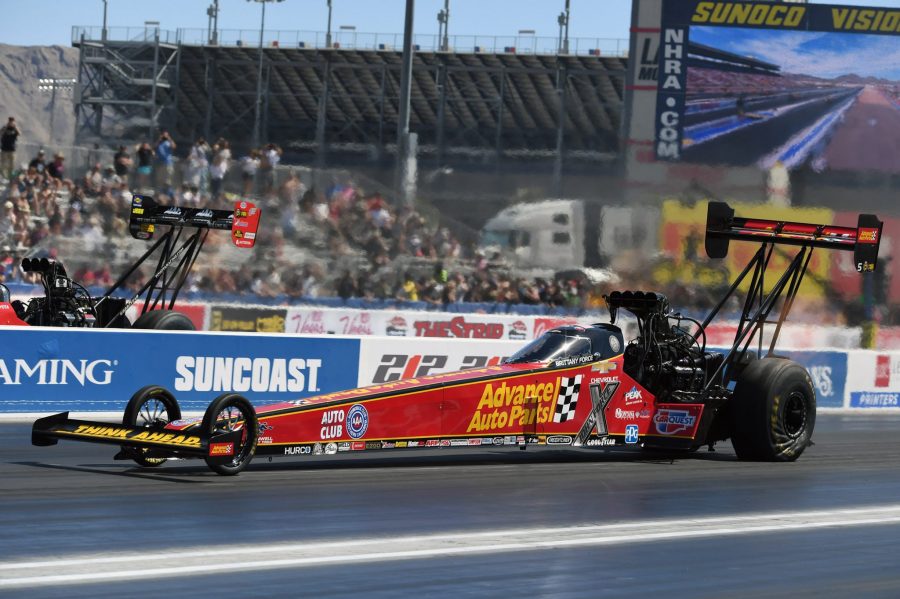 LAS VEGAS (April 7, 2018) — Brittany Force jumps to No. 8 in the NHRA Mello Yello points standings after a runner-up finish with her Advance Auto Parts team at the DENSO Spark Plugs NHRA Four-Wide Nationals at The Strip at Las Vegas Motor Speedway on Sunday.

In the opening quad, Brittany Force laid down a 3.731-second pass at 320.74 mph to come in first over Cameron Ferre and Scott Palmer, who’s days were both brought to an end, and Richie Crampton, who advanced with Force. In the second round-quad, Force was matched up against Steve Torrence, Doug Kalitta and Crampton when she had a 3.769-second run at 318.99 mph to lead the pack once again and help send Torrence and Crampton to their trailers.

It was a stout line-up in the final quad with No. 1 qualifier Mike Salinas, and veteran racers Kalitta and Clay Millican. Force would run 3.810-seconds at 321.42 mph to finish as runner-up for the first time at The Strip at Las Vegas Motor Speedway only bettered by Mike Salinas’ 3.801-second pass at 330.39 mph.

“I’m very happy for this Advance Auto Parts team. Coming into this season we’ve had big changes with a new team, new crew chiefs David Grubnic and Mac Savage and a new group of guys. It takes a while until you figure out your routine and you find your stride,” said Brittany Force who moved from 11th to eighth in points. “We really hit it hard this weekend and it really showed here in Vegas at the DENSO Four-Wide. Vegas is a tough one. The four-wide is tough and not just for me as a driver but crew chiefs tuning these things as well. We were running consistently in the 70s, awesome all weekend and we came out and ended up runner-up. I’m very happy. Big moves for all of us as a team all around and I’m very happy with how we ended this weekend. We’re obviously looking for a win but we’ll have to chase it down next weekend in Houston.”

John Force and the PEAK Coolant Motor Oil / BlueDEF Chevy Camaro Funny Car SS team had a consistent weekend but fell short in what was a competitive second-round quad. To start eliminations Force was second off the starting line and came in first in the quad with a 3.916-second pass at 329.67 mph, sending Pedregon and Phil Burkhart home. In the second-round quad Force again was second off the line but came up short to run a 4.025-second pass at 321.81 mph. He was bettered by Tommy Johnson Jr.’s 3.994 at 315.93 and missed the finals by only .003-seconds behind Jack Beckman and his 4.010 at 318.32.

“Bruton Smith has really put together a great track here, all his places are top notch. Having both four-wides, that’s impressive, in Charlotte it was great and he’s done it again here. But I want to say, John Force Racing had a pretty good weekend. Robert and Auto Club leave here in the points lead so I’m excited about him, my old hot rod is sixth in the points and Brittany and the Advance Auto Parts car moved up into the points, almost got the win there in the final. We’re still working on that Montana Brand / Rocky Mountain Twist car so we have a lot of work to do with the young kid Prock but he has a big future,” Force said. “I’m excited most about Brittany because her and I both look at trees and help each other on how to get better reactions and she really had a field day today doing her job. I’m excited about that so I got to get myself back on track. I wasn’t where I needed to be but I know how to get there, I’ve been there before. Good weekend and I’ll see you all in Houston.”

Robert Hight and the Auto Club of Southern California Chevrolet Camaro SS Funny Car team had a rare first round exit after running into trouble against No. 1 qualifier Tim Wilkerson, Jeff Diehl and Shawn Langdon. Hight coasted to a 4. 524-second pass at 186.30 mph to come in fourth in the quad.

“Obviously not the result we wanted. Kind of a tough weekend for us at the DENSO Four-Wide Nationals. We got things figured out from qualifying but then just overpowered the track. I tried to pedal it but the safety system shut me off. We’ve done well so far this season and had a cushion with the points so this Auto Club Chevy is still in the lead heading into the next race. We’ll do some testing tomorrow and then be ready to go in Houston.”

The weekend came to a close for Austin Prock and the Montana Brand / Rocky Mountain Twist team after running into trouble in their first quad. Prock had an impressive reaction time at .025-seconds but his dragster smoked the tires forcing him to shut off early and coast to the finish line at 20.242-seconds and 40.84 mph.

“I finally got my head in the right spot at the starting line, had a good light. We had the thing hopped up and then it just got away from us this morning. We missed the tune up just a little bit and blew them off at the hit so we’re going to stay tomorrow and test, make some runs and get this race car sorted out and head to Houston and hope for a better weekend,” explained Prock. “I have all the faith in these guys out here and my crew chiefs Jon Schaffer and Ronnie Thompson. I’ll be on my game and I know they will be too. We’re going to put it all together next weekend.