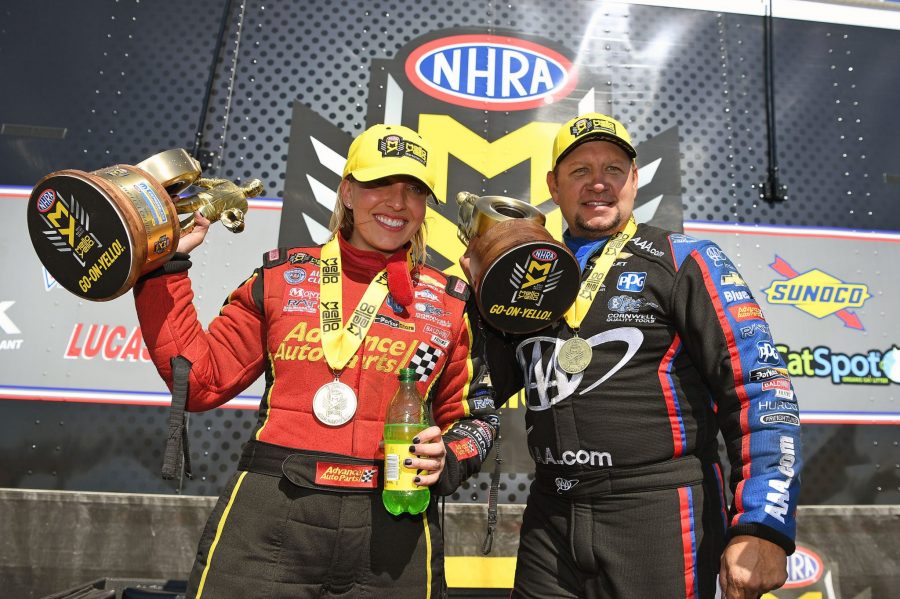 BAYTOWN, Texas (April 14, 2019) — For the third time in John Force Racing history the team has swept the nitro categories at an NHRA national event. Brittany Force with Advance Auto Parts and Robert Hight with AAA Texas picked up victories at the Mopar Express Lane NHRA SpringNationals at Houston Raceway Park on Sunday.

“This is the third time Brittany and I have had double ups. Really fourth if you count the championship in 2017. Getting the championship, we seem to do really well together in these circumstances so it was really cool to be down there when she made the corner and throw a bunch of Mello Yello on her car as she came around. It was pretty cool,” said Hight. “That team is new. We just put that team together and to see what they’ve accomplished in the short amount of time was cool. Usually it takes a team, a driver and everybody awhile to gel and especially with our John Force Racing parts that we make. David Grubnic and all of his guys, they’ve adapted well and have had two finals in a row and got a win. They’re on their way.”

After a history making Saturday where Brittany Force secured the No. 1 qualifying position with her father, Force battled her way through Cameron Ferre, Doug Kalitta, and Clay Millican before taking down three-time world champion Antron Brown for her ninth career victory, first of the season and second consecutive at Houston Raceway Park.

“All of John Force racing was on a mission this morning. It was a good qualifying weekend. My dad and I were number one. It was the first time a father and daughter have ever qualified a number one together at an event. It was pretty awesome for all of us and the fans,” said Force. “That’s something very special my dad and I will share. We were looking for a win together but to do it with Robert Hight by my side in that AAA Texas car, that’s pretty awesome and we’re happy.”

Force was consistent all day starting it off with a 3.766-second pass at 321.19 mph against Ferre who had a red light start. In the second round of eliminations Force lined up with veteran racer Kalitta. The pair had a clean side-by-side pass but Kalitta’s 3.744-second pass at 320.36 mph was nothing compared to the stout 3.678-seconds at 323.74 mph that Force and the Advance Auto Parts team had waiting for him. Onto the semifinals Force would race long-time drag racer and national record holder, Millican. Millican would run into trouble early going up in smoke at the hit of the throttle. Force would run a 3.738-second pass at 314.31 mph. Her reaction time was 0.002-seconds, too close for comfort for the 2017 Top Fuel world champion.

“A lot was going on in my head. In that semifinal run, I screwed up. My team gave me a race car and I got lucky. I got so lucky. I think it was a .002 light. You’re not supposed to have that in a Top Fuel car,” said Force. “Luck was on our side then and after that run I went and talked to my dad, to Robert and David Grubnic sat down and talked to me. He said, ‘Get it out of your head and let it go or you’ll come up there and do the same thing.’ We sat down, we talked, I got it out of my head and we pulled it off so it’s a lot of people involved, it’s the support system I have around me and all of the JFR drivers. I talked to them all and got my head back in the game.”

In the final, Force matched with Brown who had defeated the most recent winner Mike Salinas, his teammate Leah Pritchett and reigning world champion Steve Torrence before going toe-to-toe with Force. It was a clean pass for Force who was the clear winner at the finish line piloting the Advance Auto Parts dragster to a 3.749-second pass at 302.14 mph to Brown’s 3.995 at 233.48 after hazing the tires at half-track.

The victory is Force’s first since the SpringNationals in 2018 and her first with new team headed by David Grubnic and Mac Savage.

“Coming into this season with all of the changes, a whole new team with David Grubnic, Mac Savage and a whole new group of guys, that’s a lot to wrap your head around. To go out to Phoenix and try to find a routine and figure out what works and make some runs down the track. Really its about finding a routine,” said Force. “I knew it was going to take us awhile but we started turning a corner in Gainesville and that’s where I screwed up. We had a good race car. Then we went to Vegas and were runner-up so I knew things were turning around. It just takes time to find that and move forward with the team. To be able to come out here as the number one qualifier with that 3.66, that’s just an outstanding run with David Grubnic, Mac Savage and all the guys. To win this thing, I’m very excited. It’s our first win together as a team.” Friday night, Robert Hight was sitting outside the 16-car field, Saturday he had propelled the AAA Texas Chevy Camaro SS into the No. 5 qualifying position. Sunday he was holding his third Wally of the 2019 season, third at Houston Raceway Park and 48th of his career.

“I wasn’t nervous about qualifying. You believe in your team and you know they’re going to get it done but what I was nervous about was the weather. The forecast didn’t look so good for Saturday and anything can happen. It could rain out and we’d just not be in so luckily mother nature held on for us. We got two runs in yesterday and we even got two points each run so even though our backs were against the wall, my team went out and came out swinging and made real good runs for the conditions and got the little bonus points,” said Hight. “I’m proud of them. I never disbelieved in them. That’s why we already have three wins this season because they’re so good. Down at the top end of the race track they asked me how I kept my team in check and really, it’s the other way around, they keep me in check. We’ve been through a lot of ups and downs.”

It was clear that with Friday qualifying behind them, Hight and the AAA Texas team were back in their characteristically consistent championship form. A pair of 3.9-second runs already under their belt entering the first round of eliminations, Hight powered the AAA Texas Camaro to a 3.895-second pass at 322.27 mph to defeat Jonnie Lindberg and his 3.961 pass at 310.63. The second round matched Hight up with reigning world champion J.R. Todd. With a .052 reaction time to Todd’s .073, Hight never trailed crossing the finish line at 3.914-seconds at 314.75 mph bettering Todd’s 3.940 at 318.17.

For the fourth time this season Hight would face teammate and John Force Racing owner John Force during eliminations. It was the third time the pair had matched-up in the semifinals and for the third time the result was the same, Hight would send the boss to the trailer. It was a tight race with Hight gaining a .064 advantage over Force’s .070 reaction time. Hight would defeat the 16-time world champion with a 3.924-second pass at 309.91 mph. Force would run a 3.932 at 312.78.

“I know John wants me to go up there and have the same intensity when I race him as I do with anybody else but it’s tough. This sport is very humbling but it can also change in a hurry. John can go out and beat me the next four times I face him. That PEAK team is really coming around and running good. They were the number one qualifier,” said Hight. “I hate beating the boss but who knows, maybe he’ll park me and I won’t go to Charlotte but I doubt it. I’ll be honest, it is a bummer to beat the boss. John Force has won 149 wins and 16 championships because he’s an intense competitor. He wants it as bad as anyone else and you just know that, every day he goes to the race track he’s looking for 150. I wouldn’t be standing here today if it wasn’t for John Force.”

The finals would put Hight against rival Matt Hagan for a classic John Force Racing versus Don Schumacher Racing drag race. Hight again never trailed bettering Hagan on reaction time and putting up the winning time of 3.941-seconds at 310.84 mph to Hagan’s 3.966 at 311.70.

“I had a tough road. Jonnie Lindberg, he’s a tough competitor. Second round against J.R. Todd, he’s the current champion and John Force, he’s looking for his 150th win. Nobody will ever, ever match that or even come close. Then I had Matt Hagan in the final,” said Hight. “It was a tough day and it was kind of funny because Tiger Woods goes out and wins the Master’s today and they look at him as an old man. He’s 43 year’s old. Well, I guess in this sport I’m older than most of the guys I race other than the boss and it shows that the older guys can still get it done.”

Sixteen-time Funny Car world champion John Force and the PEAK Coolant and Motor Oil BlueDef Chevy Camaro SS Funny Car team move up to fourth in the points standings after securing the No. 1 qualifier and having a semi-final appearance Sunday at the SpringNationals. The racing legend started eliminations with a round one victory over Terry Haddock when he posted his quickest run of the season, a 3.858-second pass at 326.71 mph to Haddock’s 4.162 at 267.53. In the second round Force powered his hot rod to a 3.977-second pass at 311.34 mph defeating Bob Tasca III and his 4.060 at 258.47. He took the momentum into the semifinals where he went head-to-head with eventual race winner Hight for the fourth time this season. The pair had a great pass but Force fell short when he ran a 3.932-second pass at 312.78 mph to Hight’s 3.924 at 309.91.

“It was a good weekend. I’m still chasing win 150 and I would have liked to have done it here in Houston with Brittany and where I got my 100th but I came up short,” said Force. “My team is giving me a great race car. We’ve all had to step up. I’m still going after it. That 150 is coming. I’m proud of Brittany and Robert with Advance Auto Parts and AAA Texas. When they win, I win too. So, it was a great weekend. Ready to get to the next one and get after it again.”

Austin Prock and the Montana Brand / Rocky Mountain Twist Top Fuel dragster team started race day with a round one victory over fellow rookie, Jordan Vandergriff. Prock had the starting line advantage with a 0.048 reaction time and ran a 3.717-second pass at 325.85 mph to Vandergriff’s 0.071 light at 3.747 at 324.51. In the second round of eliminations Prock again had the starting line advantage but smoked the tires and had to shut off early to run a 4.739-second pass at 162.18 mph. He was bettered by reigning world champ Steve Torrance’s 3.732 at 322.73.

“It was a great get-well weekend for this Montana Brand / Rocky Mountain Twist hot rod. We threw down some great numbers and had low E.T. in the first round and I was knocking the tree down today,” said Prock. “It was a hell of a turnaround from Las Vegas. We will continue to better our performance and get ourselves a Wally here soon.”

The next stop for the John Force Racing foursome on the NHRA Mello Yello Drag Racing Series schedule will be the NGK Spark Plugs NHRA Four-Wide Nationals at zMAX Dragway in Charlotte, N.C., April 26-28th.