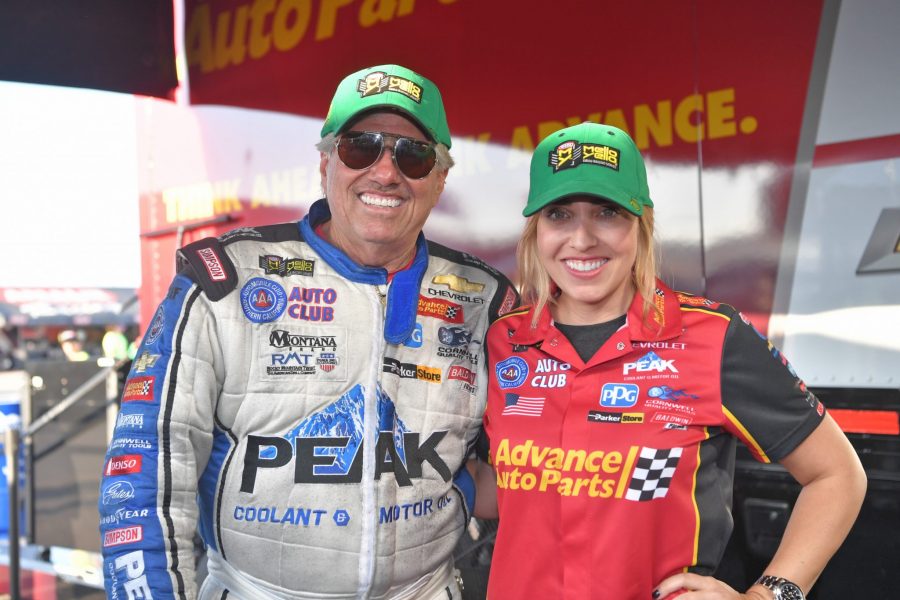 BAYTOWN, Texas (April 13, 2019) — On a Saturday threatened with bad weather, John Force and Brittany Force became the first professional father-daughter No. 1 qualifiers in NHRA history. The duo dominated their respective categories through four qualifying sessions to secure the No. 1 qualifiers Saturday at the Mopar Express Lane NHRA SpringNationals at Houston Raceway Park. Robert Hight and the AAA Texas team fought their way into the 16-car field as the No. 5 qualifer and rookie Austin Prock and the Montana Brand / Rocky Mountain Twist team found their stride to qualify No. 6.

At the facility where John Force secured his 100th win and Brittany Force had her first victory after a jarring accident, the pair have secured their first double-up No. 1 qualifiers.

“In my career I’ve done a lot of things, won a lot of specialty races but anytime this sport brings we together with my children, that’s what I really love about NHRA drag racing,” said John Force about qualifying No. 1 with his daughter. “We’re one big family. To have a moment with Brittany, that her and I can share together, we’ve really become a lot closer. There won’t be a party tonight, we have a race to win tomorrow but it’ll give us a moment of just looking at each other and me being mostly proud of her.”

Brittany Force holds both ends of the track record after a blistering 3.661-second pass at 332.18 mph from Friday’s session under the lights. The Advance Auto Parts Top Fuel dragster team headed by David Grubnic and Mac Savage had a plan to work some things out during Saturday’s qualifying sessions. They lost traction for a 6.460-second pass on the third run but came back with a solid 3.716-seconds at 306.19 mph even after shutting off early.

“We’re coming in strong this weekend. We had a good weekend in Vegas. We were runner-up at the Four-Wide. We’re coming in strong in Houston. We won this last year and the plan is to come out and win this thing tomorrow on race day. Setting both ends of the track record last night was awesome. A 3.66 on the board is a pretty incredible run by David Grubnic and Mac Savage, and the Advance Auto Parts team. We’re looking for a long day tomorrow. Its where it really begins,” said Force. “Talking to my crew chiefs, we were looking to get setup for tomorrow. In the second run temperatures cooled down a bit so I had a good feeling we’d be able to get it down there and put a good number on the board. We struggled in the third session but overall we’ve had a great weekend with good runs and looking for a long day tomorrow.”

This is Force’s 11th No. 1 qualifying position and first at Houston Raceway Park where she is the defending SpringNationals champion. Force has won from the No. 1 spot only once in her career, but it was significant — the 2017 Auto Club Finals where she clinched her world championship. She’ll start race day matched up with Cameron Ferre.

John Force and his PEAK Coolant and Motor Oil BlueDEF team will start race day from the No. 1 position for the first time this season. It is Force’s 156th career No. 1 qualifier, an NHRA record, 18 more than second all-time Warren Johnson who has 138. It is also his 11th No. 1 at Houston Raceway Park. The last time Force qualified No. 1 was the 2017 Gatornationals here he went on to win the race. He’ll be chasing win 150 on Sunday, beginning with a match-up against Terry Haddock.

“I’ve earned a lot of these hats. Not so many lately but Brian Corradi and Dan Hood, Tim Fabrisi, these guys are doing a really good job at teaching the new kids and the old. They give me a hot rod that runs like that, tomorrow is a whole new ball game,” Force said. “Tim Wilkerson is hungry and I thought he was going to be right there with me but tomorrow we have to get after this thing. Tonight, we can share the moment and tomorrow, we’ll come out here to Houston Raceway Park to entertain the fans. Again, I want to thank the Angel family. The Angels spent their money and that is what our sport is all about for us to survive in this economy. To run numbers like that on a great race track makes me feel really good and, especially, to see my baby girl do the same so thank you to the whole family and God bless you.”

Force’s 3.888 second run came during the first qualifying session Friday at Houston Raceway Park and held through both sessions on Saturday. Force and his PEAK BlueDEF team went up in smoke early and had to click the Chevy Camaro off in the first session but came back with a solid pass of 3.923-seconds at 324.20 mph to close out the night.

Starting Saturday’s qualifying from outside the 16-car field, Robert Hight and the AAA Texas Chevy Camaro SS Funny Car team turned things around during the final two sessions. Hight ran a 3.920-second pass at 321.73 mph in the first session that bumped him up into the top of the field in the No. 5 spot. He kept up the effort in the final run to make a 3.908-second pass at 314.17 mph securing his position going into race day.

Hight will go head-to-head with Jonnie Lindberg in the first-round Sunday.

“We didn’t start the weekend like we hoped for but we really changed things today. We ran consistently and got in the .90s so I’m happy with what this AAA Texas team has done to get this car where it needs to be. We were second quickest both sessions today,” said Hight. “We weren’t in the game and now we are. I never had any doubt. We’re sitting number five and we’ll be ready to go rounds tomorrow. We’re heading into race day and looking for another win.”

After staying consistent during Friday’s qualifying, Austin Prock faced trouble in the third session on Saturday when he ran a 8.639-second pass at 74.89 mph after shaking the tires and pedaling his Montana Brand / Rocky Mountain Twist dragster to the finish line. Prock was able to turn things around in the final session when he posted the second-quickest elapsed time of his career 3.727-seconds at 325.92 mph. The run bumped him up one spot to the No. 6 position heading into race day where he’ll face fellow Rookie of the Year candidate, Jordan Vandergriff for the first time in round one.

“I had a good day. I ended the day with a 3.72. It still had a little bit left in it and tomorrow morning conditions are going to be good,” said Prock. “We’re going to try and go up there and do the same or a little bit better. Jordan Vandergriff is running good too so it’ll probably end up coming down to the starting line. I’m looking forward to racing him. It will be my first time racing him in eliminations and hopefully we can come out on top.”